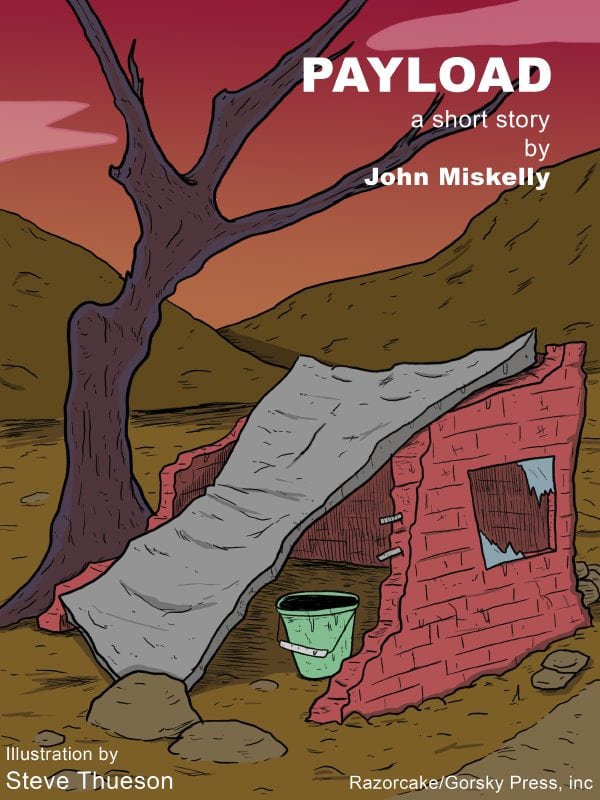 Click here to read this story as a PDF.

The coffee tasted like the inside of a third-hand wetsuit, but such were the circumstances and such was the place that Agent Cruz threw it back by the cupful, refilling the lid of the thermos repeatedly as he bashed away at the keyboard. The last of the locals to abandon the town had donated the coffee to him, brewing it up on the side of the shell-pocked road as they took a break from towing their meager belongings away from the rubble and dust that was their home.

Cruz was sitting on an upturned bucket in the last dwelling in the town that could still passably be called such a thing. Three walls, the bucket, and, oddly, a battered and dust-coated games console the like of which he’d played in the school common room were all that were left of the place. His pack, laptop, and the hulking but smooth matte black GPS system were incongruously sleek and contemporaneous against the desecrated backdrop.

Finally, the laptop signaled the suggestion of a connection.

“It’s a highly fluid situation, ma’am—if we don’t hurry the target will have moved on. What’s the status of your man?”

“He’ll be here,” the Director replied, “Cruz is the best Field Agent we have.”

“And he’ll have the coordinates, the codes?”

“He has them,” she replied, confidently. “He’s the only one left that does.”

“We’ve got something!” she said.

A grainy, stuttering picture began to materialize on the office monitor, and eventually a voice crackled through the speakers. “Ma’am? Are you there?”

“We’re here,” the Director said, her voice rising slightly with a hint of giddy excitement. “Cruz?”

“What’s the situation like out there?” the Director asked.

“Well, I understand from the briefing that you were in Bosnia, ma’am?”

“Sorry to hear that,” she said.

“My commiserations,” said Cruz, his smile flickering and faltering as the signal wavered.

It was then that it hit Cruz, or, at least, he became conscious of it—a certain kind of shifting weight that had been there for a time but had up until then gone unnoticed. A movement like something awakening inside him.

For a second she’d wondered whether the picture had frozen; Cruz’s face was momentarily inanimate.

“You have the codes?” she prompted.

He disappeared from the screen for a moment, the image reduced to a stop-start blur of unzipped bags and moving limbs as he gathered the relevant documents.

And they began the formalities. First identifying passwords, personal PINs, and the like. As he reeled off the familiar numbers and letters, the feeling within him grew, pushing downwards with an increasing impatience. The longer and more complex the numbers he quoted, the more nagging the feeling became, like a petulant child tugging his insides and demanding his attention.

“Right,” the Director said. “Now for the meat of the issue. We’re going to have to print some of this stuff off, sign the papers, make it official, do it by the book. You understand, General?”

“It’s what separates them from us,” he said.

“Quite right,” she said.

The General grunted his approval.

They waited, and the monster brewing inside Cruz writhed and lurched even harder. It wouldn’t wait. Could he do it now? he wondered. Flip over the bucket he was sitting on and just do it? His private school education and years in the military had instilled in him a deep sense of decorum and decency that somehow wouldn’t allow it. Plus, the relief would barely be worth the ribbing he’d receive back in London from his fellow servicemen. Did they record these exchanges? Surely it would remain on file somewhere, and, Official Secrets Act or not, end up in the inbox of every one of his colleagues and put on standby for every function and Christmas party from now until eternity.

But could he, though? They knew the situation. They knew where he was. The Director had  been in Bosnia. She knew the realities of being in the field.

But no. Whether dining with heads of states in opulent palaces or perched on a bucket in a bombed-out shack, there were some things a representative of Her Majesty’s Secret Service just didn’t do. One must endure.

As his guts writhed, so did he, shifting position on the bucket, rearranging his limbs, leaning sideways to allow the escape of the byproducts that filtered downwards ahead of the impending storm, the pungent, wafting harbingers of an inevitable carnage.

He searched for a distraction.

“Golly,” he said. “We can design a camera the size of a pinhead but we still can’t get hold of a reliable printer,” he said, breaking the silence.

A smile of polite acknowledgment from the Director and a short sharp grunt of a laugh from the General was all he got. “Necessary admin, I’m afraid,” she added.

Another agonizing minute passed in which the tumult in his guts continued to swell.

“I don’t suppose you can divulge the actual target this time, ma’am?” he asked.

“I’m afraid not, Cruz. As usual, I expect you’ll be the last to find out,” she replied apologetically.

“Just one of the many ironies of conflict—the people on the front line are almost always in the dark,” added the General in an almost wistful tone.

“Needless to say, though, Cruz, your contribution is absolutely invaluable,” she added hurriedly.

“An immeasurable contribution,” added the General.

The beast was pressing against the door now, and Cruz strained with all his might to keep it at bay.

“Okay, we’ve got it,” she said finally. “Now Cruz, the coordinates.”

His knees danced and his calves ached with the effort of resistance as he fumbled for the correct notes.

“Right,” he said, staring down at the paper and trying to focus, even as the trembling of his sweating hands reduced them to little more than a blur until they were hardly more distinguishable than the two distant faces coming across the fading GPS signal.

But he reeled them off nonetheless, until one particularly violent gust loudly announced itself from within him.

“Wh—what was that?” she asked.

“Just—I think—I think there’s a bit of trouble coming my way,” he gasped. “Sounded like a mortar if I’m not mistaken.”

“Oh yes, no doubt about it—that sounded like a mortar to me,” said the General knowingly.

“Christ,” she said, the widening of her eyes visible even on the grainy laptop screen. “I thought you looked a bit nervous. Well, we’d better be getting on then.”

And so he continued, hurrying, the General taking his own notes, and the Director occasionally interrupting for agonizing clarifications.

The wildness pushed even harder in a bid to escape, and Cruz could feel his body beginning to capitulate against his will, losing the battle.

“Can you just give me the second set of digits on the second line once more?”

“Of course,” he said, his voice breaking slightly as he repeated the numbers.

It was coming now—its patience was spent. It was happening and no petty geopolitical nonsense was going to delay it any longer.

“Three,” he said without looking at the sheet.

“Okay Cruz, expect deployment within five minutes. Now get yourself out of there.”

“And once again, Cruz, your actions today, well, they’re the culmination of—”

“And I know you’re in a hurry but I’d just like to add—”  began the General.

“Uh-huh,” he said, slamming down the lid of the laptop and sending papers, equipment, and confidential documents flying across the room as he flipped the bucket, relaxed his muscles, and let it happen. As the bomb bay doors opened and the deluge cascaded downwards, the euphoria he experienced was a full body mental and physical ecstasy incorruptible by context or surrounding. He remained there a moment more than was necessary, breathing deeply, as relaxed and carefree as if he was sitting in front of the fire in his local pub with a fresh pint of local ale and a packet of Monster Munch.

A moment later, Cruz stepped out of the building and into the warmth of the evening sun. It was amazing, he thought, how nature could project a certain kind of beauty even in a place as desolate and broken as this. He sat on a rock and contemplated life, thinking about the mission, his extraction, London; home. He felt contentment, a feeling of completion and accomplishment he hadn’t experienced on any other mission. Seeds of doubt remained in his mind, of course, they always did—complacency was never a virtue in matters such as these. But, he was a pro, the best. Other than the inevitable debriefs and paperwork, the acquisition and exchange of intel was the closest thing to routine he experienced in this job, his bread and butter.

He lit a cigarette and catching sight of the coffee flask—the culprit, so to speak—smiled ruefully to himself. Maybe it had even helped—the panic, the added urgency, the raising of the stakes. It would certainly make for another good anecdote, or at least a frivolous detail in his memoirs. He sighed, took another drag, and looked to the horizon. “There really isn’t anything better than a good dump,” he said to himself.

“Okay,” the Director said. “The payload’s been dispatched, missiles are on their way. Fingers crossed this is a hit. Finally, we’ll have something really positive to give to the press, something really—”

“It’s a hit,” said the General, studying another screen.

“Not really,” he replied, turning from the screen, his face a sickly shade of gray. “It’s a hit,” he repeated. “On the Russians.”

She collapsed into a seat. “Can we—we can explain, surely? They’ll understand.”

A phone rang. She answered. Said nothing. Replaced the handset.

“It’s already started,” she said, her voice shaking. “There’s been a skirmish on the border. No contact from Moscow but they’re moving the PM and the cabinet. Official state of emergency declared.”

They sat together in silence for a moment.

“How could this—” the General began.

And they both stared into the empty black of the monitor, reflecting back at them only their own stunned faces.

John Miskelly lives and works in windy, wavy, rainy Gijón, Asturias, on Spain’s Northern coast. He is thirty-one. A whole load of his other stories can be found on this site and Razorcake’s archive site.