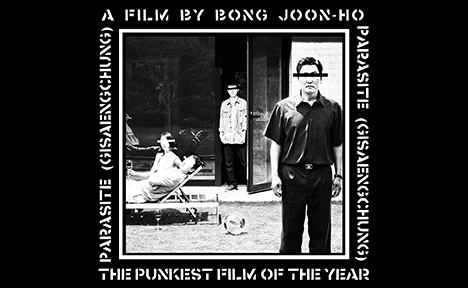 Parasite: The Punkest Film of the Year by James Rosario

What Korean director Bong Joon-ho has created with his new film, Parasite, is a beautiful, modern, live-action baroque painting, stuffed to the gills with biting satire and unmistakable social commentary. Whether it’s a warning, requiem, or affront probably depends on which side of the fence you live on or which tax bracket you belong to. But make no mistake, Parasite exists as a statement—and it’s a damned effective one at that.

I’m of the belief that it’s best to walk into Parasite with as little foreknowledge as possible. However, for the purpose of critical analysis, elements of the film’s plot and themes will be revealed and discussed throughout this piece. Parasite is a film that I wholeheartedly recommend seeing before reading any further.

Bong Joon-ho is one of the most critically and financially successful film directors in South Korea. His films have consistently broken South Korean box office records and garnered international acclaim. His early films—Barking Dogs Never Bite (2000) and Memories of a Murder (2003)—were well-received upon release in his home country, but it was 2006’s The Host (the tale of a monstrous sea creature who wreaks havoc on the Han River) that put him on the world map. With its environmental messaging and criticism of U.S. policies, The Host had not only solidified director Bong as a bankable box office draw, but also as a savvy political voice. Oddly enough, The Host even became a favorite in North Korea for its anti-American underpinnings.

Director Bong’s political commentary continued with a pair of international hits. Snowpiercer (2013), a dystopian sci-fi thriller about class struggles among the last survivors of a climate disaster, and Okja (2017), a critique of genetically modified foods and the meat industry, further proved director Bong’s knack for injecting nuanced political and cultural commentary into films of varied genres and styles.

Continuing Bong’s career-long critique on class distinction and struggle is Parasite, the story of two families—the upper-class Parks and the lower-class Kims—whose lives become tangled in a complicated web of deceit, naïveté, indifference, and drive. Neither family is inherently villainous or black-hearted, but they each suffer shortcomings the other couldn’t possibly understand, besides wholly depending on one another for survival. Parasite culminates in an unexpected and violent spectacle that serves as a beautiful microcosm for an awakening populace raised on dark comedy and light wallets. This wickedly perverse display of burgeoning class-consciousness is a direct representation of the frustration working people across the globe feel in the face of an oblivious high-born aristocracy.

Making literal and figurative use of the familiar “Upstairs/Downstairs” motif (in which the upper-class, or rulers, live in the spacious upper floors of a grand house, while the servants inhabit the lower depths), Parasite draws clear lines of class separation from its opening moments. Like Iranian director Abbas Kiarostami’s 1990 film Close-Up (a peculiar half-documentary reenactment, half-courtroom drama), Parasite explores the desire to escape the day-to-day of poverty and monotony by interjecting oneself into the lives of a well-off but naïve family.

The downtrodden Kims live in a semi-basement apartment (it’s literally half-underground) in a modern-day Seoul, South Korea. With only small windows at eye-level with which to peer outside into the trash-strewn alley, the Kims spend their time fighting off drunks pissing next to their front door and fending off an annoying insect infestation. They eke out a living folding pizza boxes for meager amounts of cash and subsist on cheap food and pirated Wi-Fi.

The economic opposite Park family lives in opulence on the other side of town. Their sleek home, with its clean lines, open format, and abundance of natural light, was built by a famous architect and sits on a green plot of land surrounded by a large fence with a heavy gate. It stands in stark contrast to the shabby confines of the Kim’s underground dwelling, making it difficult to understand how the two could exist so close geographically, or how the lives of these two families could ever possibly coalesce.

It’s at first by mere circumstance—and later by devious design—that the two families cross paths. When the eldest Kim child, Ki-woo (Choi Woo-shik)—who longs to go to college, but can’t afford it—gets an offer from a successful university friend to take over as an English tutor for the wealthy Park family, a series of events are set into motion that turn Parasite, for a time, into a clever heist/con film. One by one, the Kims supplant the Park’s servant staff with themselves—sister Ki-jeong (Park So-dam) as an “Art Therapist,” father Ki-taek (Song Kang-ho) as Mr. Park’s (Lee Sun-kyun) driver, and mother Chung-sook (Jang Hye-jin) as the housemaid and assistant to the Mrs. Park (Cho Yeo-jeong).

All is well until the reappearance of a displaced employee disrupts the Kims and their plans, adding an entirely new level to the film’s already established “Upstairs/Downstairs” concept. It’s through this unexpected plot twist that the Kims question whether they can ever truly belong to a class they were not born into and begin to realize that no matter how well they are treated by their employees, they will never be anything more than servants to them.

In addition, the Kim’s class loyalty is first tested when it’s decided the best way for them to succeed is to have others fired from their cushy jobs (they rationalize this in increasingly self-deluded ways) and tested again when confronted with those who are even worse off than they are. After a destructive rainstorm (in which shit literally rolls downhill), it’s Ki-woo who decides on extreme measures to defend his family’s newfound prosperity from those who would upset it. He chooses to betray his class. His father, Ki-taek, on the other hand, begins to see that rich and poor can never be friends or equals. In a moment of clarity, Ki-taek rejects the bootlicking of his son and those who dwell below him (again, literally and figuratively), and sees the world for what it is: an unfair mess of a place, where hard work and brains get you nowhere, while inheritance and indifference bring wealth and status.

Then, in a spontaneous moment of class awareness and loyalty, Ki-taek strikes an allegorical blow to the upper-class, wealth disparity, and the evils of exploitative capitalism. But, as many modern revolutionary sparks go, the meaning and message behind his actions are lost on an uninformed population and a naïve ruling class. In the end, after much loss and injury, the Kims remain largely where they started: dwelling underground and surviving as best they can.

Parasite doesn’t mince words. In fact, this has been the main point of negative criticism among many of its naysayers. To some, Bong’s allegory is too literal. This conceit is something that has never sat well with me in the field of film criticism. The idea that a film’s message must be so deep and so elusive that only your advanced intellect could possibly understand it is insulting and elitist. Yes, Parasite wears its messaging on its sleeve (so does “Nazi Punks Fuck Off”), but that’s not to say that everyone will interpret it in the same way. It’s still a complex and beautiful film with plenty of room for hearty debate and speculation, regardless of specific takeaways.

The allegory may be on the nose, but in the face of ever-present doom, is a slap-in-the-face wakeup call such a bad thing? In this regard, Parasite also exists as a rejection of foot-dragging centrism and corporate apologists. The Kims and the Parks are a metaphor for an exploitative economic system at odds with humanity, the parasitic nature of that system, and the results of their inevitable conflict. In its final moments, Parasite offers a kind of beautiful hope to a desperate populace, then heartbreakingly pulls us from the dream. Is this reality check telling us that having hope is foolish, or that we should act to free ourselves from the bonds holding society back from its true potential? Parasite doesn’t give us a clear answer, but dares us to examine what kind of world we want to live in and act accordingly.