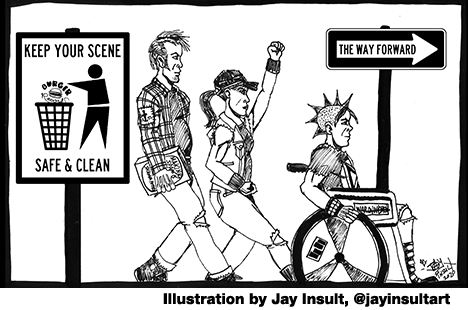 Overcoming Abuse and Harassment in DIY Spaces by Will Kenneth

As I’m writing this, the stories of institutional predatory behavior coming from DIY venue, music label, and venue Burger Records are still unfolding.

People are sharing stories about a culture of predatory behavior toward young women. While many of these accounts are being shared anonymously and reposted by @lured_by_burger_records on Instagram and continue to be shared in their mentions, these stories share many of the same details. Women are saying that they were being groomed by older men and experienced sexually inappropriate behavior including assault by bands on the Burger roster and by those in charge.

In response, the record label founders chose to close up shop and delete their social media presence.

While these stories are shocking, I don’t want to write a list of abuse allegations and call it a day. Let’s talk about what happened, because we need to reflect on that as a community, and we’ll talk about direct action we can take to prevent and address predatory behavior from happening in the future.

Attempts to purge Burger’s existence won’t resolve the trauma experienced by young women in the DIY community, though closing Burger is a good first step toward accountability, even though their hand may have been forced (their initial response was to try to save Burger Records with a rebranding, which was laughable).

The people coming forward to out their abusers are brave as hell, even the ones speaking anonymously. These survivors are having to reconcile with their abuse, which can sometimes take decades to understand and come to terms with, and then speak out about what happened and how abuse has affected them. Speaking from personal experience, that shit isn’t easy.

For someone like Lydia Night of Warner Records’ band The Regrettes, speaking out about being groomed at a young age by an older musician (Joey Armstrong) exposes her to retaliation. She risks being ostracized in the music industry: losing out on chances to tour or having her music being promoted. She could also face further harassment from her abuser, his friends, and his fans. That’s not an easy position to put yourself in.

Even the women speaking out anonymously could still face reprisals if they were doxxed.

(Pro tip: If you see your friends in mourning when talking about how a band they loved was outed for being abusers, the correct response is not to say something like, “I never liked Culture Abuse anyway.” Using an abuser’s behavior to validate your own opinion about their music is self-centered and unhelpful. First please consider the betrayal of trust your friend is experiencing, in addition to the victims that the band left behind. Don’t make this about you.)

But the problem is bigger than Burger Records and some of the Burger bands. Hearing stories of men preying on younger women is like listening to a broken record, but with each cycle the stories repeat and the names and places are different.

Predators exist in every community, I know this too well because I was briefly in a band with one. This is not something that exists in isolation at Burger Records. We can’t assume our DIY institutions will do the right thing. For every Chris Clavin that gets canceled, we still have Wil Wagners that are able to remain active even after allegations surface that they were emotionally abusive and harassed ex-girlfriends.

If you’re as frustrated and saddened over this as I am, then I want you—yes, you, dear reader—to take those energies and focus them into building a community centered on making spaces safer. This is not the future of DIY that we were promised. We can still make that future happen, and we have the tools to build it.

We have to raise our expectations for each other. You can tell yourself that you don’t rape, sexual assault, or harass people, and that’s great, but I want you to do more.

When I suspected my ex-bandmate of preying on young women online, I discussed my suspicions with mutual friends. They agreed with me, but we felt powerless to stop it. I didn’t realize I had the power to protect people in our spaces.

Here’s my call to action: You need to read and reference Making Spaces Safer by Shawna Potter, and then implement her suggestions in your spaces. As matter of fact, every person who runs a venue, is in a band, bartends, or anybody who likes going to shows should have access to a copy of this book. If you can’t access or afford one, I will help you buy one (the e-book is $1.99 right now!).

(For those of you keeping score, this is now the second time I’ve cited Shawna’s work in my column. Is that cheating? No, not when the information presented in the book is so crucial and so relevant and will remain that way for years to come.)

In Making Spaces Safer, Shawna lays out critical strategies for how to establish a safe space for everyone in DIY spaces. I’m going to share a high-level look at these plans to give you a sense that these goals are achievable.

Shawna recommends putting up signs letting people know your intent to not tolerate harassment or abuse, and that isn’t that different from when venues like 924 Gilman put up signs warning that racism, sexism, and homophobia aren’t tolerated. You can also show your intent to be a welcoming space by making sure you can accommodate a diverse group of people, such as making sure you have wheelchair accessibility throughout your space (can someone with a wheelchair get inside without needing help?) and by including gender-affirming and gender-neutral language for your bathrooms.

You’ll need to get everyone on board to agree and understand the importance of making venues safe spaces. The more people working in the space committed to making the space safer, the more likely you are to reach everyone. You can also help a diverse group of people feel welcome by being inclusive with the artists and performers invited to your event and doing the same with the people working your event.

While all those actions are helpful, Shawna says that how you respond when you learn that someone was harassed or subjected to violence is when the real work happens. If someone comes to you and says they need help, your goal is to validate their experience and to make them feel safe without making the situation worse. Shawna outlines three steps to help the victim: Listen, Act, and Check In. When listening to the victim, believe them, make sure you acknowledge their story, thank them for coming to you, and let them know you’ll take care of the problem.

For taking action, Shawna teaches people to offer the victim three options: You can offer to keep an eye on the harasser, talk to them, or throw them out. These options can help empower the victim and make them feel safe, but make sure you don’t violate the victim’s privacy if you talk to the abuser. And finally, check in with the victim after the fact, too.

While the tools in the book won’t stop all predators and harassment, Shawna gives us the tools to help prevent another Burger Records and to help victims in the moment. It’s up to us to see these action plans through. I’m going to challenge you to make your space safer, because if you don’t, who will?