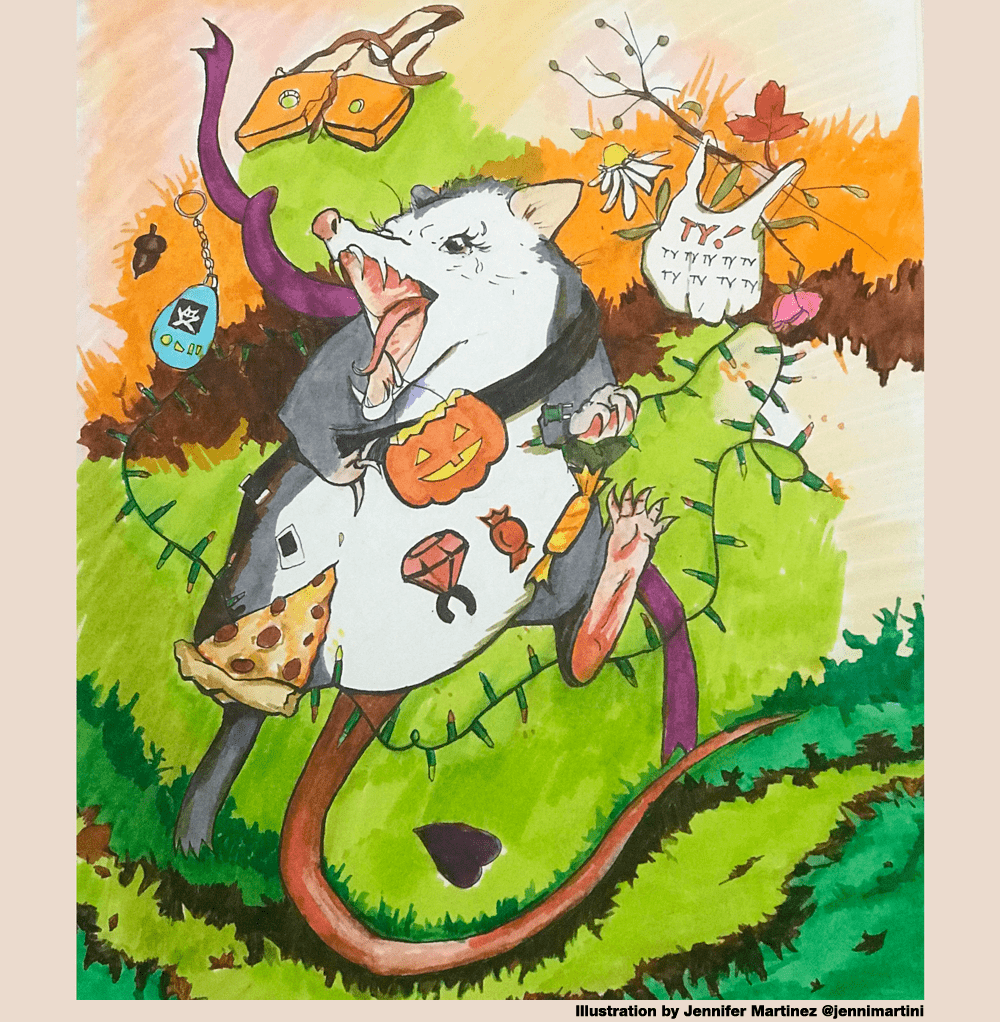 Out of Sight, Out of My Mind by Jamie L. Rotante

Since a very young age, I’ve often grown abnormally fond of not only passing people and animals, but even for the occasional inanimate object. My last move meant wading through piles and piles of garbage I held onto for no good reason other than trying to capture the slightest hint of the feelings and emotions I had when the items were first in my possession. It doesn’t tear me apart to dispose of these knickknacks and novelties when push comes to shove, but it’s much easier for me to tuck them away, behind things in a closet, under the bed, collecting dust until they’re eventually excavated, their value appraised—their fates decided between a trash bag or a storage locker.

My heart will not break if these items were to disappear or be taken without my knowledge—in fact, I’d hardly notice if they were to never be in my possession again—but if it’s up to my decision, I’ll hold onto items forever just to not part with moments from my past, as if any removal will wipe my past away with it, as if my brain doesn’t clamp down on memories with precision and absurd recall. None of this is a huge surprise; my overflowing bookshelves and dozens of junk drawers and storage bins tell that tale all too well. However, the depths to which I used to hold on to items was once far more severe and hard to explain.

My earliest memory of this was the first time my mother ever trimmed my hair at home. Most of my life I was a “picker.” I’d lay next to my mother or grandmother in bed and pick at their hair like a child monkey grooming its mother. I grew attached to every part of these women—especially their hair that I not only would play with, but I would also give names and identities. That first time I saw my own hair fall on the kitchen floor I felt immediate remorse and begged my mother to salvage what she could of it. She obliged, also wanting to have memories of my childhood. So began my little bagged up hair collection I’d keep in my jewelry box, opened once in a while but ultimately forgotten, giving my mom the opportunity to dispose of it when I wasn’t looking.

And it wasn’t just my hair, either—I’d begun collecting both my mother’s and my grandmother’s as well. The same eventually happened with teeth. The day I realized the Tooth Fairy didn’t exist, I placed a lost tooth under my pillow without telling my mother, only to discover it back in the same spot the next morning. Forlorn, I scooped the tooth up and placed it in that same small jewelry box on top of my dresser drawers. I kept that tooth there for as long as I could remember, unwilling to part with it, aware then that it wouldn’t be ground into fairy dust (or whatever it is adults say the Tooth Fairy actually does with children’s teeth), and not wishing upon it a sad demise at the bottom of a garbage bag to be incinerated.

I don’t know what ever happened to that tooth.

Of course, it does also extend beyond possessions and inanimate objects. I’ve spent most of my life fearing the loss of people who matter the most to me. I’ve woken up in the middle of the night worried that something’s happened to a family member, even if there is no legitimate reason to have such a frightening thought. My mind constantly goes to the most horrific and upsetting “what if”s about the people I hold dear to my heart until I have to literally shake myself out of feeling that way.

And yet, when I’m confronted with loss or grief, I find myself feeling numb more often than not. It’s that numbness that can be scary. I’m aware of loss. I understand grief, but it might not sink in for some time. Or I realize it early on, but I don’t feel it until waves of loneliness and utter sadness wash over me when I’m least expecting it.

It’s that numbness that worries me. I’ve chalked it up as “strength.” In reality, an emotional shutdown in response to an overwhelming flurry of emotions doesn’t necessarily make me a strong person.

This is especially the case with many interpersonal relationships in my life, too. I vacillate between feeling clingy and numb—wanting to constantly make sure my friends and relationships are intact at some times and completely shutting down and moving away from them at other times. I see friends having other friendships blossom and I feel replaced, forgotten, cast aside. I grow bitter and spiteful, and I feel like I’ve been rejected for something I can’t quite place. I know I have it within my power to reach out and extend a friendly hello, but my pride gets in the way. This just leads to more feelings of abandonment. If I have a friend who I hear from often, I begin to worry I’ve done something wrong if I don’t hear from them for one day, but I’m also frightened of scaring them off by being too insistent on talking to them.

You could imagine how much worse this all is during a pandemic-forced time of isolation.

The notion of temporary distance is tough for me to swallow. I’ve read online that I’m what you call “insecurely attached,” which is far too accurate of a description. I believe firmly there are more “grey areas” in life than people will admit, but sometimes I find it hard to accept that friends can still respect me and want me in their lives even if they’re spending time with others or not checking in on me every day, or every week, or even every month. The same way I haven’t forgotten about any friends I haven’t checked in on. If I can understand it with myself, why can’t I do the same on their behalf?

And I think back again to those inanimate objects and my attachment—it’s not always just hoarding or collecting. It’s buying groceries to have in case I can’t get them later, stocking up at the farmers’ market for fear I’ll never see those vendors again, only to shove vegetables into the crisper drawer for too long, recalling their existence but afraid to check in on them or use them until they’re withered or moldy and time to be discarded. It’s placing cans of soup so far back in the kitchen cabinet that they’re forgotten completely until they’re past their expiration date, no longer good for anyone to use. I fear these same rules apply to human beings and relationships, wanting so badly to have these people in my circle and just in my reach, but ultimately unutilized until it’s too late.

I don’t want that for them. But what if they feel that way about me? What if they feel as though I’m not putting in the effort, so I can be shoved behind other better relationships, only to be taken out and dusted off when they’re feeling nostalgic and need a pick-me-up? How do I shake the feeling that that’s all I’m really good for? How do I break the cycle that I’ve perpetuated, whether it’s real or imagined?

Maybe writing this is a start. Maybe a friend will see this and reach out. And, if not, maybe I’ll just have to swallow my pride and go for it—at the very least, that action, even if it leads to a fear of rejection, is better than feeling numb.