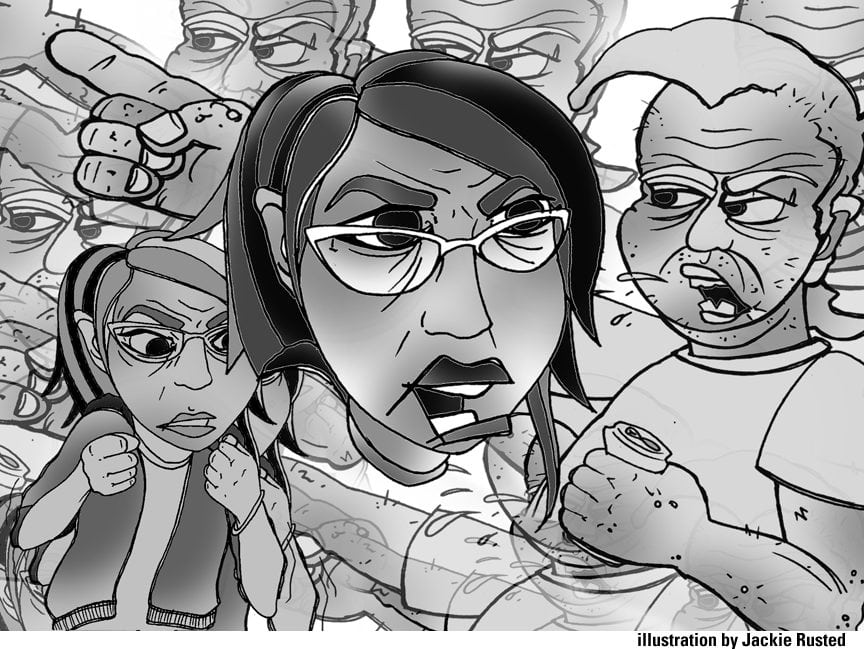 One Punk’s Look at Social Anxiety, Neuroticism, and Other Fun Stuff by Jamie L. Rotante

I’ve spent most of my life trying my damndest to avoid labels. I pride myself on being a paragon of complexity with values that seem radically different from one another. I could consider this a pretty punk ethos to maintain, but I’ve got to be honest: my complex nature comes purely from fear. I can’t be pigeonholed or subscribe wholly to a countercultural subset because that means I’d probably say or do the wrong thing and let everyone down.

Yes, as humans, we’re all pretty problematic but that doesn’t mean I want to be called on it. That’s far too much pressure to deal with. And I spend enough time laboring over every thought, word, and action and then even more time reflecting back on said thoughts, words, and actions to be regarded in any other way than just another face in the crowd. But in the past few years I’ve started writing more about my life—something I’ve always closely guarded. The basis for most of my writing has been something I unquestionably identify as a shy, neurotic, socially awkward loser. And even that label makes me nervous.

See, I acknowledge the fact that I suffer from some obsessive compulsive tendencies and I’m paranoid for, like, a solid eighty-five percent of my waking existence. I know I’m socially awkward and prone to panic attacks. I also have never seen a therapist about it, so does that make me less qualified to write about it? Can I really be an authority on the topic if it’s only self-reflexive? Who am I to give voice to these feelings if there are countless others who may have suffered the same, if not worse? Writing this right now is making me nervous. I wake up sometimes and just imagine something going potentially wrong at some point during the day and I get nervous. It’s become a part of my everyday life but, oddly enough, it’s not something I’ve ever gotten used to.

Being uncomfortable is my natural state.

Fortunately, that seems to be the case for a lot of self-identified punks. In fact, I get pretty weirded out by the self-assured ones. We all pack ourselves into sweaty community centers and basements or dive bars and small venues because there’s something safe about them. You don’t have to talk to anybody if you really don’t want to; you can blend into a wall in the corner or you can finally get some nerve and jump in the pit or grab the mic when it’s offered your way from right in front of the stage. These are moments that make you feel like you’re a part of something bigger than yourself, but not big enough to make you feel like a tiny, isolated creature kicking through the cosmos for even the faintest hint of recognition. It’s a community. It’s unity.

The funny thing with finding a group of like-minded people is that many of us are too damn socially anxious to actually be comfortable with one another and ourselves, which makes the “community” aspect a little hard to attain. What also makes for a hard go at community for us awkward punks—especially those who are female ,non-white, trans or non-gender binary is that our voices are often eclipsed by others who want to solely equate punk with being white and male,

Just last night I was at a show. I was enjoying the music after a few drinks when a group of young couples walked in. They were all a little drunk themselves but weren’t really bothering anybody. This dude behind me of about forty with a bleached blonde mohawk started loudly mocking their presence, yelling ‘OH, I GUESS THE KARAOKE CROWD IS HERE!” I thought he was just making fun of the fact that many young NYC-ers get pretty blitzed at little karaoke bars all over the damn city. Then he kept getting more and more insistent and loud with his mocking, throwing out a bunch of made-up Japanese words in an offensive accent. It was then I noticed that all of the couples who walked in were, in fact, Asian. I cringed when I realized what the joke was for him. This was his space, and being drunk and loud and pushy was only acceptable if you looked like him.

Nothing skyrockets me back to reality faster than a hardcore reminder that the safe spaces I create are often times only in my head. For just a moment—when we’re all listening to music, dancing and sweaty and cheering—it does seem like we’re all unified and in the same mindset. But all it takes is one asshole to wreck any social situation, be it a sporting event, a party, a reunion or even the beloved tight quarters of a punk show. Once you’re taken out of your own head, you realize that very few places really are safe

Being a woman makes me nervous. I have to take comfort in the so-called safe spaces simply because most of the world just isn’t safe for me. And the bullies at the top of the food chain want to make damn sure it’s never safe for me. We live in a world where a man running for president has encouraged a continued language and culture of misogyny, xenophobia, and racism. And sometimes it’s not men who propagate that culture of vile, radical anti-women language. There are women who also believe that other females are just weak and “like” being victims because they have the luxury to think that way. There are men who refuse to believe that patriarchy is real because, “Hey, I’ve had some bad stuff happen to me in this country too.” Those voices are always going to be louder than mine.

My stomach is flip-flopping around right now just thinking about when I share this article; if anyone will try to debate any of the points I’ve made. Then I think about how bad it is I get too nervous and upset to argue and that just fuels my anxiety even more.

It’s an endless loop of nausea, heartburn, upset stomach… you get the rest. Basically, it sucks.

Life is fucking nauseating and nerve-inducing for almost everyone. As a race, humans are riddled with stress, anxiety, paranoia, and fear. It doesn’t help the mass media feeds off it and spreads it. We’re conditioned to live in a never-ending state of panic. I am no more special than anyone else because I’ve got anxiety. My anxiety doesn’t give me a pass at being an adult or dealing with what life tosses my way. I don’t ever want to use my anxiety as an excuse or a crutch. But, like it or not, my anxiety is a part of who I am. It has been for most of my life.

I can’t remember a time when I wasn’t nervous or agonizing over every little detail in my life.

What I am grateful for is that so many others who deal with the same—that community—have become more vocal about it. Reading something or listening to someone who suffers from similar kinds of neuroses has helped me to not only feel like I’m not alone, but to also better understand why I do some of the things I do. I can’t recommend enough seeking out appropriate mental care if you’re able, but that’s not always accessible to everyone. Just knowing there are others out there can help—in fact the subtitle of this very article was lifted from an older episode of The Chris Gethard Show when it was on public access on the Manhattan Neighborhood Network. The episode’s frank discussion of anxiety—something the show often tackled—helped me understand myself in a huge way. Knowing so many others out there are feeling the same and can come together and talk about it is one of the few things that actually calms me.

Listen, we’re all floating around this big, weird, unkind fucking universe together. The least we can do is look out for one another. And if the only way you can do that is by sharing your story, then do it. Nerves be damned.