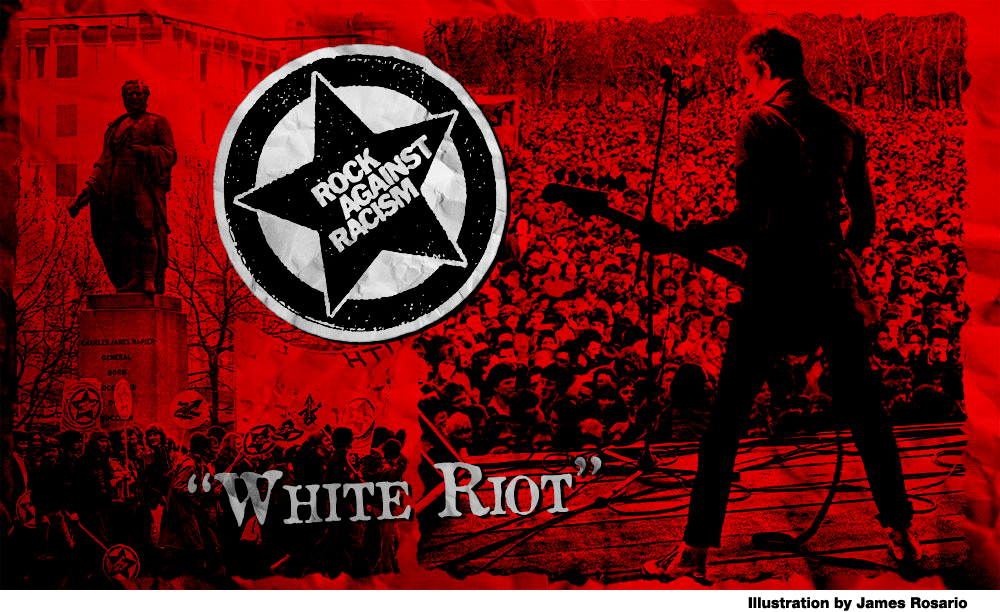 One Punk Goes to the Movies: White Riot, a Film by Rubika Shah By James Rosario

I am writing this on November 10, 2020, one week since election day. For progressives, leftists, activists, and punks, voting for Donald Trump was a laughable if not utterly incomprehensible notion, but as exit polls, statistics, and percentages continue to trickle in, it becomes clear that for over seventy million Americans, Trump’s potent recipe of fear mongering and division was good enough for a second helping.

And why not? For the last four years, racists have had near carte blanche to spew their vomit proudly and openly all over our streets and airwaves for the first time in decades. Emboldened by a president who values self-righteousness over understanding, and greed over even a semblance of compassion, these spiteful yet utterly fragile Americans march on and on to the tune of their own self-importance and misguided exceptionalism.

The truth can be hard to swallow, but here it is: Donald Trump did not invent racism, and racism will still be a major problem in America long after he is gone.

The truth can be hard to swallow, but here it is: Donald Trump did not invent racism, and racism will still be a major problem in America long after he is gone.

For anyone who has ever looked past their high school history class, these revelations are horrifically apparent and rarely disputed. Many Americans, however, prefer spoon-fed bullshit that validates their place in society and their god-given right to it. A white American with an uninformed opinion and a self-inflated sense of entitlement can be a very dangerous thing. Unfortunately, as we have learned in the days following the election, that’s at least half of the country.

In her new documentary, director Rubika Shah details a familiar story—one of racism and xenophobia strengthened by political power and embraced by a willfully ignorant and unknowingly sheepish people. Perhaps more importantly, though, it’s the story of what a youth movement did to stop the rising tide of fascism they saw their country warming up to. Her film takes place forty years ago and an ocean away, but as eerie similarities to our own crossroads emerge from it, a disheartening relevance takes shape.

White Riot stylishly chronicles the rise of Britain’s Rock Against Racism (RAR) movement in the late-1970s and culminates with their first grand “Carnival Against the Nazis,” held in London’s Trafalgar Square on April 30, 1978.

White Riot stylishly chronicles the rise of Britain’s Rock Against Racism (RAR) movement in the late-1970s and culminates with their first grand “Carnival Against the Nazis,” held in London’s Trafalgar Square on April 30, 1978. This event, featuring sets by The Clash, X-Ray Spex, Steel Pulse, and Tom Robinson Band drew 100,000 people and signaled a political and cultural rejection of organized hate in England.

Opening with footage of Jimmy Pursey’s frustration over violence erupting at a Sham 69 show and British National Front members loudly stating their case for a racially homogeneous England, White Riot kicks off by highlighting the harshness of fervent street-level racism backed up by a media-savvy political wing. This racism, however, wasn’t considered fringe at the time, and the National Front (NF)—a far-right political party founded in 1967 that was, for a time, England’s fourth-largest—was picking up a number of council seats across the island.

Eric Clapton told an audience in 1976 that England had to, “get the foreigners out, get the wogs out, get the coons out,” before drunkenly and repeatedly shouting the NF slogan “Keep Britain White”

These electoral successes were bolstered in part by support from musicians like Eric Clapton and Rod Stewart. David Bowie even paid the NF credence when, in several interviews, he said, “You’ve got to have an extreme right front come up and sweep everything off its feet and tidy everything up,” among other pro-fascist remarks. Clapton perhaps went the furthest, however, by telling an audience in 1976 that England had to, “get the foreigners out, get the wogs out, get the coons out,” before drunkenly and repeatedly shouting the NF slogan “Keep Britain White” at the surprised crowd.

It was these outbursts from prominent British musicians that finally led activists and music lovers Red Saunders, Kate Webb, Syd Shelton, Ruth Gregory, and others to form the Rock Against Racism concert series and its print fanzine companion, Total Hoarding.

After seeing The Clash play an early whirlwind set, Saunders was convinced that punk rock—along with its ally reggae—would be the soundtrack to a new anti-racist movement in Britain. With punk in its infancy and yet to fully realize its place in the pantheon of music history or radical politics, swastikas and other fascist imagery were at the time seen by many in the burgeoning scene as fashionably inflammatory, and there were concerns that the movement would slide to the right. But, through Temporary Hoarding, the gauntlet was thrown down. “Love Music Hate Racism” became their slogan, and as lines were drawn, punk became officially radical.

But there’s much more to it than that, and White Riot doesn’t skimp on the history, the self-reflection, or the danger associated with a growing progressive movement. As vibrant and energetic Totally Hoarding and RAR was, their opposition was equal parts vicious and extreme. In addition to having the numbers to back up their violent outbursts, the NF had a systematically racist police force in their pocket to help them beat back and arrest those they opposed. These grim realities are reflected in the film’s surprisingly gloomy tone, but it’s far from a morose experience. Through the bleakness comes moments of raw energy and unbridled righteousness, and it’s in these punching moments we realize the struggle to end white supremacy is not only ongoing, but deeply entrenched in punk’s history.

White Riot ultimately paints an uplifting picture, but the darkness of its journey plays out in the foreground rather than the background, with the urgency of the movement taking precedence over the music or musicians involved. Shah’s storytellers are careful not to paint themselves as heroes and never glamorize their roles in the cause. Outbursts of cultural positivity are consistently underscored by the very real threat of violence against RAR-supported bands and audiences. However, the amazing energy and vibrancy captured in the film’s concert footage stands as what proved to be a significant counter to the pull of the right, ending the film on a note of optimism. But, never self-congratulatory, White Riot and its subjects neither pat themselves on the back nor acknowledge a winner has ever been declared in the fight, despite the NF being largely defeated in the polls shortly after their first carnival.

Interestingly, Shah or her storytellers never directly reference today’s political and cultural climate. Yet, direct parallels are easily drawn. The film’s closing words drive home the necessity to stay vigilant regardless of what election results tell you. As is painfully obvious, the success of the RAR’s “Carnival Against the Nazis” in 1978 did not end racism in England or anywhere else, just as a new president in the White House won’t. White Riot is a film that makes me proud to be a punk, but more importantly, it makes me proud to have been a part of a community that has taken such an active stand against racism for so long. Despite a few loud-mouthed, out-of-touch, way past their prime has-beens and oh-so-edgy grumps, punk rock remains to this day a place to foster seeds of change and convert ideas into action. The struggle is an uphill one, especially with the free pass so many Americans have had for the last four years. But, as White Riot shows us, it’s people, not politicians, who decide the future. We just have to be willing to fight for it.