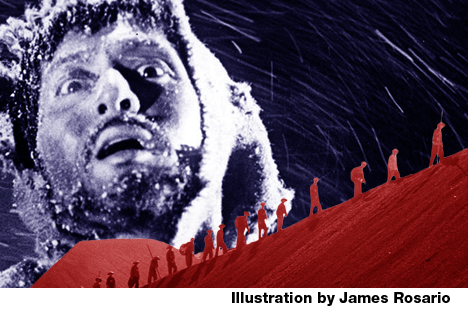 One Punk Goes to the Movies: Unpacking Masaki Kobayashi’s “The Human Condition” by James Rosario

One Punk Goes to the Movies: Unpacking Masaki Kobayashi’s The Human Condition

Between 1959 and 1961, Japanese director Masaki Kobayashi released a three-part, nine-hour epic that was pro-socialist, anti-conformist, and critical of Japan’s involvement in World War II. Post-war Japanese cinema had been gaining traction as a viable and influential movement with directors like Akira Kurosawa and Yasujiro Ozu gaining praise in the West from heavy hitters like Orson Welles and John Ford. Films like Seven Samurai (Kurosawa’s 1954 epic) and Tokyo Story (a subdued family drama by Ozu released in 1953) had plenty to say about Japan’s role in the war and Japanese culture, but did so through subtext rather than overt criticism. Kobayashi took a different route—he confronted the party line head on and without apology with his monumental film, The Human Condition.

Generally, the war years were praised and vindicated as noble and just within Japanese media, making Kobayashi’s film an eye-opening experience for many moviegoers. Depictions of the brutal trappings of military life and Japan’s corrupt occupation of mainland China weren’t something the public was used to seeing. Junpei Gomikawa—author of the autobiographical six-volume novel that served as the film’s source material—seemed determined to purify Japan’s role in the war by peeling back the layers and exposing the relentless truths of what he’d endured. As a fellow pacifist and non-conformist, Kobayashi identified with the novel and obtained the rights to make it into a film. The Human Condition is a masterpiece of survival, spirit, and decency set against the vicious backdrop of conflict corruption, and death. Through this grim setting, ideals are put to the test as Kaji, a pacifist and socialist, navigates the harsh realities of war.

The film, told in three parts, begins and ends in the snow. Kaji (played by the brilliant Tatsuya Nakadai in his first starring role) is a low-level bureaucrat with the Japanese government. He’s also a pacifist who desperately opposes the war. Kaji fears eventual conscription into military service and therefore refuses to marry Michiko (Michiyo Aratama), the woman he loves. When he’s offered military deferment in exchange for bringing some of his radical ideas about working conditions to a forced labor camp in Manchuria, he agrees, marries his sweetheart, and heads for the unknown on mainland China.

Once there, he finds his idealistic views on the treatment of laborers met with strict resistance. He argues that treating men with dignity will yield better results. The brass disagrees, opting for beatings and other forms of severe punishment. When a train full of Chinese dissidents and POWs arrive, things go from bad to worse. Kaji is now faced with humanizing these “dogs” to his superiors, who see them as less than human.

Kaji’s only friend is Okishima (Sō Yamamura), a fed-up camp supervisor who doesn’t quite understand Kaji, but respects his idealism. By constantly pointing out the failings of Kaji’s “humanism,” Okishima often betrays his gruff exterior by hinting at admiration rather than condescension. Unfortunately for Kaji, the more he tries to assert his insistence on treating the prisoners with a modicum of decency (along with the prostitutes hired to help keep them in line), the more trouble it gets him into. Eventually, he becomes a problem. His nonconformity and opposition, as well as his contention that the Japanese military is, in fact, fallible, gets him in hot water. By the end of the first film (subtitled “No Greater Love”), Kaji finds himself with his military exemption revoked and drafted into the army.

According to the American Humanist Association, humanism is defined as “a progressive philosophy of life that, without theism or other supernatural beliefs, affirms our ability and responsibility to lead ethical lives of personal fulfillment that aspire to the greater good.” In the second film (“Road to Eternity”), Kaji remains an unquestionable humanist by this definition, even though he now finds himself in an army training camp. His beliefs are put further to the test in this frustrating and illogical setting. Oddly, due to his strict personal beliefs, he easily takes to the basics of soldier life and excels. He’s a good recruit and the best marksman in the camp. He defies his superiors whenever he sees injustice or unfairness, but, in a perfect example of military absurdity, all this manages to do is get him promoted. Kaji is fully aware that front line combat is in his future, but along the way, he does his best to help his fellow trainees. Many share his beliefs, but are either too afraid to speak up or too inarticulate to put them into words.

In a memorable sequence (borrowed liberally by Stanley Kubrick for his 1987 film Full Metal Jacket), a rookie named Obara (Kunie Tanaka) is bullied to the point of suicide. When Kaji’s demands for punishment of PFC Yoshida (Michirō Minami), the ringleader of the harassment, is denied, something unknowingly changes in him. Later, Kaji inadvertently finds himself in the position to save Yoshida’s life, but he hesitates. His beliefs are tested once again, but under these drastic and desperate circumstances, making a truly just choice seems impossible. For his trouble, he’s promoted, put in charge of a group of green recruits, and tasked with making them ready for combat. Kaji suffers humiliation after humiliation to protect the young soldiers from the abuses of a grizzled battalion of artillery vets. He quietly takes severe beatings rather than allow his squad’s humanity to be destroyed by the harshness of these savage men. In a cruel twist, most of Kaji’s troops end up victims of a surprise Soviet attack.

“Road to Eternity” concludes with Kaji—after having been forced to kill to defend himself in battle—half-gleefully and half-insanely screaming, “I’m a monster, but I’m still alive!” He has now fully recognized the insanity of war, but more importantly, that his convictions are useless when faced with Soviet tanks or the thousands of other poor saps who are caught up in the machine as he is.

Part Three (“A Soldier’s Prayer”) follows Kaji and a rag-tag group of survivors and refugees as they battle hunger and the elements in a desperate attempt to return home. They have no news of the war (it’s over, in fact), but now must dodge both Soviet occupation forces and local Chinese militias who hate the Japanese for what they did to their countrymen during the war. As they wander, they occasionally come across groups of Japanese soldiers who insist that the war is still being waged and they must continue to fight. Kaji, taking a role quite the antithesis of conventional Japanese thinking at the time, refuses to fight, proudly declaring himself a deserter. However, violence and death are still part of his new life, as he and the others are forced into skirmishes to stay alive.

Eventually, the group is captured by Soviet forces and taken to a work camp. Kaji’s wartime life has now come full circle. Where he was once a labor camp supervisor, he is now a prisoner. He naively thinks that, as a socialist, the Russian occupiers will sympathize and understand his pleas for better conditions, but through a vindictive translator and bureaucratic corruption, his pleas go unanswered. His men are forced to pick through the trash for extra food—an act seen as rebellious and thusly punished.

Kaji comes to realize that the “socialists” that are his captors are nothing like he’d hoped. They are brutal, uncaring, and corrupt. Interestingly, he does run across a few low-level guards who he may have found a kindred spirit with under different circumstances, but the madness of the situation doesn’t allow for such camaraderie.

The film’s conclusion is one of total devastation. I won’t divulge what happens, but it ends as it begins—with Kaji and the snow. Both his humanity and his humanism have been eroded by a cold and unforgiving war machine, but also by the total indifference of his fellow man. Kobayashi’s use of snow is a brilliant metaphor for this. Is Kaji naive? Are his beliefs unrealistic? Perhaps, but his resolve, will to live, and insistence on helping others in the face of great adversity are admirable nonetheless. Ultimately, Kaji’s tragic story is both a meteoric anti-war statement and a plea for people to treat others with dignity and respect. The Human Condition is Masaki Kobayashi’s epic ode to the human spirit—and it is a masterpiece of cinema. In a bitter twist, though, the only true way to make such an ode or plea is to recognize and see with open eyes the ruthlessness with which the human race goes about its daily business. You must be willing to face the inhumanity to address the humanity Kaji so desperately fights for.