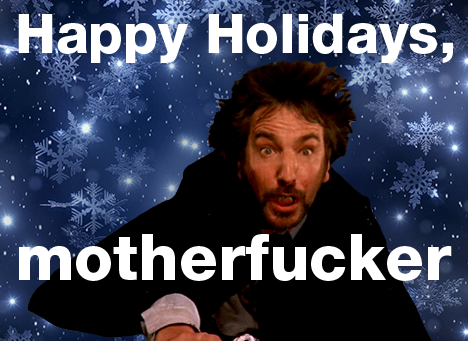 One Punk Goes to the Movies: The “Die Hard” Debate By James Rosario

The debate has been raging for decades, with only strict, binary, yes or no answers allowed. Some heavy hitters have weighed in, including Bruce Willis firmly in the “no” column and screenwriter Steven E. de Souza in the “yes” crowd. The question, of course, is this: Is John McTiernan’s 1988 blockbuster and genre-defining action thriller, Die Hard, a Christmas movie?” Based on a percentage of writers who’ve contributed to the debate, I’d say the consensus stands tough on yes. But, after reading several articles, I felt dissatisfied with the results and the evidence. I never found any sense of true analysis—just fun holiday jesting and a desire to not appear as a “Bah Humbug” type. So, I set out on my own quest to get to the bottom of this hotly debated topic. I can only assume that my careful analysis will finally put this holiday hot-button issue to bed once and for all.

I hereby decree that, yes, Die Hard is a Christmas movie.

First, let me preface by stating that I’ve always been on the “yes” team. But after reading all the fluff pieces on the topic, I came to realize that I’d never actually given the subject much real thought. Die Hard takes place on Christmas Eve, therefore it must be a Christmas movie, right? Well, not necessarily. My thinking was that if Die Hard truly was Christmas movie, it would have to follow standard genre tropes—so that’s where I started. After that, I dove into the reality of modern Christmas and its impacts (i.e. the cultural, societal, and commercial aspects) and how Die Hard fit it in this regard. I honestly didn’t know what I was going to find, as I hadn’t seen the film in years. I was prepared to have my previous judgments completely upended, but that’s not what happened. They were reinforced—and in a big way. Not only is Die Hard a Christmas movie, but a better one than most of the schlock out there. It’s certainly an unconventional addition to the genre, but it upholds the standards surprisingly well. Here’s what I learned:

For any film to fit into a genre, it must conform to tropes. Enhancements, modifications, combinations, and subversions of these tropes are allowed, but there must be enough present to make them a recognizable and important aspect of the film. Die Hard does adhere to several holiday movie tropes—some obvious, some not so obvious. Let’s start with the obvious.

Q: Does it include Christmas traditions (music, decorations, etc.)?
A: Yes. From Beethoven’s 9th Symphony to Run-DMC’s “Christmas in Hollis.” Christmas decorations are seen throughout—often used in interesting, lethal ways. Theo’s partial reading of “‘Twas the Night Before Christmas” is also of note.

Q: Does it feature a family in strife who reconciles just in time for the holidays?
A: Yes. With a bonus of having one of John and Holly’s children plead with them to come home for Christmas. I’d also like to take this opportunity to point out that there’s a character named Holly.

Q: Is a character offered a chance for redemption?
A: Yes. John gets his family back and Al makes up for a past mistake.

This is a partial list, but it serves to point out that there are plenty of tropes and clichés readily available in Die Hard. However, when it comes to tropes, the real question is whether a film would succeed if you removed them completely. In other words, are the holiday elements in Die Hard necessary for the plot to work, or are they simply window dressing?

In 1988, action movies ruled the world. It’s plausible, and likely, that Die Hard, minus the holiday setting, would have been a financial success given the attitudes and trends of late-‘80s moviegoers. That alone, however, would not have guaranteed long-term success or subsequent (albeit dubious) sequels. I would argue that without its Christmas motif, Die Hard would be a forgotten relic of a bygone era, but more than that, it would be boring to watch now. Yes, the plot would work on any given day of the year, but the heart and fun of the movie would be gone. The Christmas angle is exactly what sets Die Hard apart from every other action hero movie. Financial success aside, would anyone be talking about Die Hard today if it wasn’t for the very debate we’re having right now? My answer is a resounding “no.” And if that is agreed upon, then Die Hard is a Christmas movie.

Now for the not-so-obvious. My goal for this piece was to watch Die Hard with as little bias as possible. I didn’t want to look for Christmas themes and events, I wanted them to happen naturally. Right off the bat, I noticed several instances that could be construed as small clues to Die Hard’s true nature as a Holiday classic. These alone aren’t proof, but by pointing them out I hope to add to the fun of your next screening. What follows are a few that I came up with. I’d love to hear some of yours.

1. When John first enters Nakatomi Plaza he’s required to enter the name of the person he’s there to see on a computer screen. He types “Holly McClane.” A list appears, but not that name. He then enters “Holly Gennaro,” his wife’s maiden name, and another list appears. He’s made a list and he’s checked it twice.

2. When John is evading the bad guys, he famously crawls through a ventilation pipe. If this isn’t a reference to Santa Claus in the chimney, I’ll eat my hat.

3. John may be a Christ-like figure. He offers salvation for many while sacrificing himself. He’s clothed in only the barest essentials, including being barefoot. When he’s forced to walk across the broken glass, this could easily represent Christ walking on water.

John may also be Santa Claus. He causes quite a clatter on the roof, leaves gifts (“Ho Ho Ho, now I have a machine gun”), and has dedicated helpers (Al and Argyle) helping him save Christmas.

4. It doesn’t snow in Los Angeles, but the end of the film features the song “Let It Snow,” with smoke, fire, and property damage as stand-ins.

On a more analytic and thematic tangent, let’s talk about one of the greatest and most enigmatic movie characters of all time—Hans Gruber. If you want to get down to it, the key to understanding this debate lies in Alan Rickman’s iconic villain. On screen, Hans Gruber is pretty straightforward—the sophisticated leader of a band of thieves hell-bent on pulling off one of the biggest heists in history. That part’s easy, but what else is he? What does he represent regarding this debate? It’s easy to see Gruber as a Grinch or Scrooge character, but I’d like to go deeper by exploring two points: 1. Hans Gruber represents a Christmas Eve snowstorm. And, 2. Hans Gruber is Christmas.

Point One: Hans is a snow storm
A common Christmas trope (usually a television one) is to have a family or group of coworkers trapped together on Christmas Eve by some sort of storm. During this episode, everyone comes to terms with each other, reconciling their differences, and rediscovering the true meaning of Christmas. Die Hard takes place in Los Angeles, so there won’t be any snow, but what if instead, you had a blizzard of mostly very Aryan Northern Europeans with machine guns to trap a group of people together? Arguably, any force—not just snow—that encourages someone to square away relationships, offer a shot at redemption, or reunite families on Christmas is a viable trope. All three happen in Die Hard, and it’s all thanks to Hans Gruber.

Point Two: Hans is Christmas
When we meet Hans Gruber, it’s assumed he’s a terrorist. What his cause may be isn’t made clear, but the level of planning, weaponry, and personnel suggest that there is one. We come to find out that he’s merely a thief using the guise of political extremism to throw off the authorities. Christmas, like Hans, is only in it for the money.

Starting around October, we see and hear advertisement after advertisement extolling the virtues of Christmas by companies whose business practices are suspect at best—and we fall for it. Companies demand we buy junk from them just like Hans demands the release of the nine members of the Asian Dawn. It’s a trick and a distraction.

On its surface, Christmas is a time of giving, and corporations do everything in their power to make sure you do just that. Credit card companies live and breathe for Christmas, as most people can’t afford all the gifts they’re conditioned to give. Hans poses as a revolutionary to get what he wants. Corporations pose as caring to get theirs. Maybe it’s no coincidence that Hans meets his demise by plummeting from the top of a tall building the same way many uber-capitalists jumped from similar heights during the great depression.

The holidays have lost much of their original meaning in a sea of red and green sale tags just as Hans’ political posturing crumbles under a pile of dead Northern Europeans and an expensive watch. Is Die Hard asking us if Christmas can be saved from the capitalists? The answer seems to be that you can—if you drop enough of them off buildings.

Does it matter if Die Hard is a Christmas movie or not? Not really, but it’s fun to talk about. While it’s certainly a non-traditional entry in the holiday genre, it still hits a hell of a lot more marks than any given Hallmark movie. Maybe the schmaltzy cable network needs to start blowing up police riot tanks with missile launchers or something, who knows? Until then, Die Hard has them—and most— blown to bits in the Christmas spirit department.