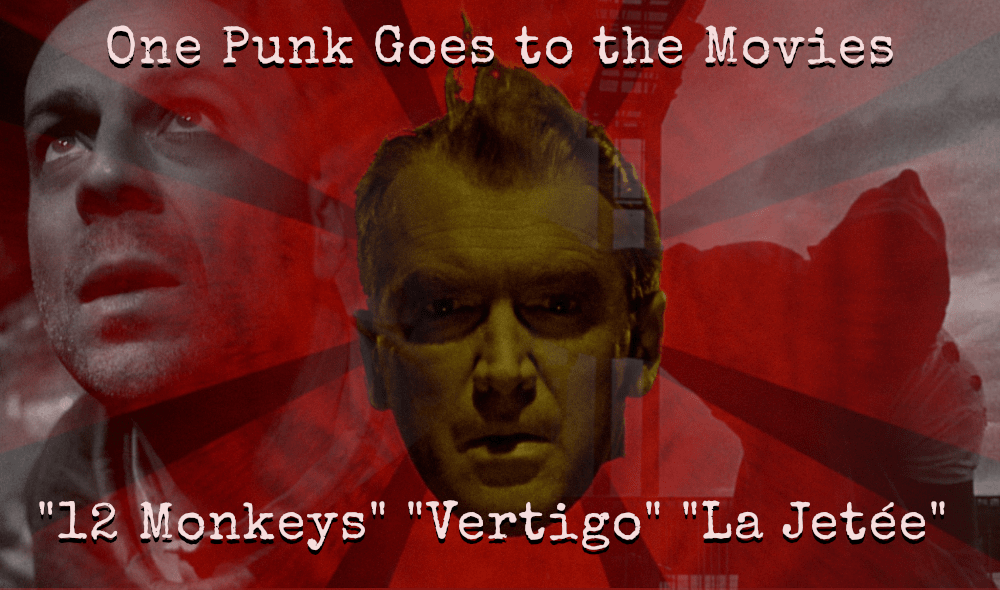 One Punk Goes to the Movies: The Apocalyptic Visions of “12 Monkeys,” “La Jetée,” and “Vertigo” by James Rosario

Shortly after the COVID lockdown began just over a year ago, I revisited a handful of movies that dealt with viruses and human extinction. Initially I was curious to see how these films from years or decades before dealt with the fear and uncertainty that naturally comes out of emerging and ever-evolving medical crises. After several viewings, what I found myself most taken with was, now in the midst of such a crisis, how little comfort I felt from any of these films—or,  more specifically, how little I identified with anyone in them.

Perhaps it’s that tricky thing called nostalgia that soured many of these films for me. Or maybe it’s because movies often have difficulty holding weight when held up against our very real experiences—especially experiences like we’ve all had over the last year. Either way, none of the movies I watched stood up to time or real world comparison. None, that is, except one—and, oddly enough, it was perhaps the most fantastical and bleak of them all.

I will admit that when Terry Gilliam’s 12 Monkeys was released in 1995, I failed to recognize the richness of its philosophical and political subtext. I enjoyed it as a sci-fi time travel yarn (something I’ve always had a soft spot for), but its messaging was lost on me. Also lost on me were the many references to its deep cinematic roots—roots I wouldn’t understand fully until twenty years later after taking film classes at my local community college. After a deep dive into 12 Monkeys and the films that inspired it, I’ve come to realize that, while it is certainly much more than the sum of its parts, it is those very parts—its themes and its influences—that make it such a worthwhile, poignant, and time-tested film.

What immediately sets 12 Monkeys apart from movies like 1995’s Outbreak or 1971’s The Omega Man, is its willingness to be something more than just a story about a virus and its aftermath.

What immediately sets 12 Monkeys apart from movies like 1995’s Outbreak or 1971’s The Omega Man, is its willingness to be something more than just a story about a virus and its aftermath. For example, in Outbreak, scientists rush to find a cure for a looming pandemic. This clearly noble endeavor is outdone by constant melodrama and speechified grandstanding. Not to mention, with what we now know about how Americans react to such catastrophes, Outbreak is completely unrealistic—a major faux pas when realism is your goal.

In contrast, The Omega Man has something clearly other than realism on its mind, but is so shoddily reliant on weird mutant cults and Charlton Heston bravado that any semblance of messaging or warning goes out the window. The Omega Man very nearly breaks down into farce, at which point one can’t help but wonder what the point of it is.

Then there are the zombie movies. While it’s true that films like 28 Days Later (2002) and other zombie-centric and virus-caused cannibal titles usually prove better at displaying a more nuanced exploration of human nature, they are still easily bogged down by all the brain-eating gore. This may be a fun way to dissect humanity’s role in the food chain, but too often serves as a distraction to underlying meanings.

Children of Men and 12 Monkeys are both about civilizations breaking down in real time, and how this breakdown affects the most vulnerable and marginalized first.

12 Monkeys, on the other hand, is none of these things, and so much more. Similar to what Alfonso Cuarón’s Children of Men (2006) accomplishes a decade later, 12 Monkeys depicts a world that is easily recognizable as our own, but one skewed by an unseen yet manmade negative power. Whether it be a virus, climate catastrophe, gun violence, poverty, lack of healthcare, or any number of factors, Gilliam and Cuarón’s films are warnings about humanity’s obsessive yet preventable march toward destruction (something alluded to in the film by the many references to a phenomena known as the Cassandra Complex, in which valid warnings and concerns are ignored by others, much to their eventual detriment). Of course 12 Monkeys takes place in two (or three, or even four) timelines, but the one that plays out in the 1996 “present” is a chilling portrayal of what our world may look like after only a few bad months under a fully deregulated society. Children of Men and 12 Monkeys are both about civilizations breaking down in real time, and how this breakdown affects the most vulnerable and marginalized first.

The time travel nature of 12 Monkeys may allow us to see both the lead-up to the fall of humanity and its aftermath, but it’s the lead-up that Gilliam focuses on. To do so effectively, he relies heavily on the power of memory and nostalgia. In 2035, James Cole (Bruce Willis in a surprisingly multifaceted role) is a prisoner in an underground complex where the remnants of society had no choice but to flee to after a virus wiped out billions in 1996. He is haunted by a powerful childhood memory of a man being shot and killed in front of him in an airport just before the plague began. Because of this, he is chosen by scientists to participate in an experimental procedure that may help them combat the virus: They are going to send him back in time to gather information.

Once in the past (and confined to a psychiatric ward), Cole’s warnings about the virus and mankind’s imminent retreat underground are treated by doctors as an intricate paranoid delusion. As he grows more agitated and confused and as his worlds begin to intersect in unexpected ways, he is always drawn back to that scene in the airport: a blond woman screaming, a gun, a man falling down dead, and him, as a child, witnessing the whole thing. It’s these powerful ties to the past, and how they are affected by the present that not only keep Cole going, but cause him to fall deeper into what could be delusion, but could also be prophecy. This melding of reality and fantasy is tied directly to Cole’s potentially unordered memory, and also the point at which Gilliam’s film converges with two other notable ones from decades earlier—both of which are direct predecessors to 12 Monkeys, and share an odd, symbiotic relationship with one other.

It may come as a surprise, but the long cinematic lineage that led to 12 Monkeys began in 1958 with Alfred Hitchcock’s highly cerebral and seemingly unrelated film Vertigo. This lineage then takes a more straightforward path with a film that bears a much more striking resemblance to the end result: Chris Marker’s 1962 sci-fi masterpiece La Jetée—the film that Gilliam and writers David and Janet Peoples credit as a direct influence, even honoring it in the opening credits of their 1995 film.

In Vertigo, James Stewart plays Scottie, a San Francisco cop who suffers from an extreme fear of heights due to a bad fall he had on the job. Now retired, Scottie takes a job tailing the wife of an industrialist who believes she is possessed by the spirit of a woman who died a century earlier. As Scottie gathers information, he witnesses the woman fall into the San Francisco Bay (or did she jump?) and nearly drown. Forced to intervene, Scottie eventually gets to know the woman, whose name is Madeleine (played by Kim Novak), and, naturally, falls in love with her. Through a bizarre series of events, Madeleine winds up falling to her death from the bell tower of an old Spanish mission, and thus begins Scottie’s obsessive regression into the past.

This admittedly obscure plot synopsis betrays the nuance of Vertigo, but also protects its surprises. La Jetée, on the other hand, offers a much more direct path to 12 Monkeys, but strangely, still cannot exist without the influence of its Hitchcock predecessor. Chris Marker—a French New Wave director aligned with fellow auteurs Agnès Varda, Alain Resnais, and others of the “Left Bank” movement—was obsessed with Vertigo and its themes of memory and nostalgia, even repurposing one of its famous scenes in La Jetée (which was then repurposed again by Gilliam in 12 Monkeys—this time using the actual scene from Vertigo played on a movie theater screen), but the resemblance between the three films goes much deeper than the superficial.

Much like James Cole and Stewart’s Scottie, La Jetée’s “The Man” (played by Davos Hanich) is a passive observer in the lives of others (and, like Cole, has a very strong connection to the past through memory, and is thus sent back in time to just before a nuclear war breaks out). All are watchers and information gatherers whose roles are adhered to as best they can be. Inevitably, though, circumstance propels all three to interact with their surroundings, which then begins to alter their perceived realities. Cole continually questions his own sanity when his worlds begin to converge, while Scotty attempts to coerce a convergence between his past and his present (and rather creepily, I might add). “The Man” is granted a vision of an even more distant and “perfect” future but still decides to live in the past, even while knowing the cataclysmic events about to take place. None of these men can exist comfortably in the world they find themselves in, and thus they fool-heartedly browbeat the present into complying with their idea of perfection.

Dramatically, all three men discover that the past can’t be recreated, no matter how hard they try. Much to their disappointment, their nostalgic and romanticized memories of happier times are not only often inaccurately recalled falsehoods, but that they change in unexpected ways when their very real and present experiences are added into the mixture. Thus, they become tragedies who are mere shells of themselves.

In 12 Monkeys, while watching a screening of Vertigo in an old movie theater, Cole remarks, “every time you see it, it’s different because you’re different.” An apt description of memory, culled from a film that could be considered a misremembered idealization of a forgotten time. In any regard, Marker’s film takes the perpetual motion of Vertigo and focuses it into a tight, twenty-eight-minute exploration of existential purpose and the search for meaning within memory—which in turn inspires 12 Monkeys to expand upon and redouble its observations on both the human experience and humanity’s increasing lack of concern for scientific warning. Where La Jetée takes a poetic and experimental approach to what Hitchcock unknowingly hinted at in Vertigo, 12 Monkeys takes a visceral one—with upping the apocalyptic stakes.

James Rosario is a film critic living in Asheville, N.C. He loves punk rock and movies, especially when the two collide. He can be reached via his blog, thedailyorca.com.