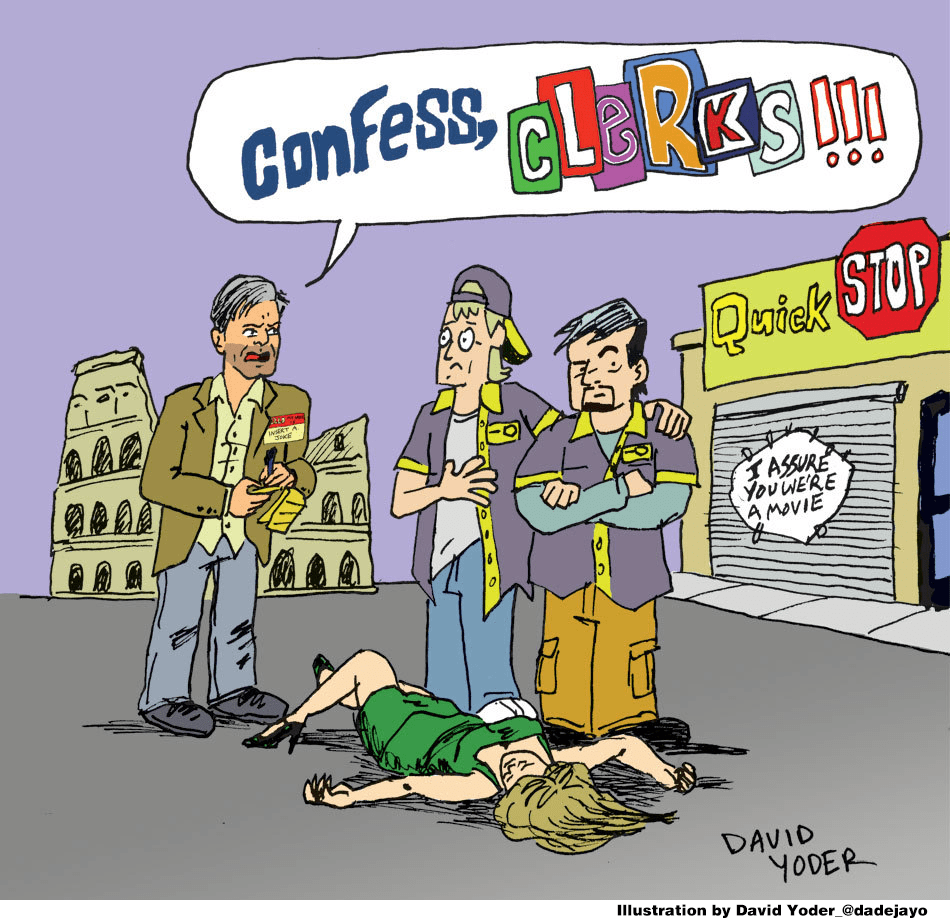 One Punk Goes to the Movies: A Weekend with Confess, Fletch and Clerks III by Rick V.

Hello folks, I like going to the movies yet seldom go. But very recently two films opened back to back and I felt like it was my duty to see them both in one weekend.

In 2005-ish, I watched Fletch (1985) for the first time. I thought it was great and hunted down a used copy of a collection of three of Gregory Mcdonald’s Fletch books. As with most books turned into films, the original 1974 book was much better. It’s mostly fast-paced back-and-forth dialogue full of wit and snarkiness. Fletch is a jerk, but usually only to other jerks. I thought, “Wow, that was great! I can’t wait to read another one.” I set the collection on the shelf where the dust jacket did its job collecting dust.

Flash forward to July 2022. I randomly got a hankering to read another book from that dusty old collection after re-watching Fletch Lives (1989) while volunteering at the local video store. The movie still sucked. It’s not based on any of the Mcdonald books, the pacing is off, and the jokes are lame. The only redeeming quality is the solid Harold Faltermeyer soundtrack. With the Fletch book collection in hand, I YouTubed “Fletch fan film” hoping to get some other version of Fletch in some sort of low-budget glory. Because, like I said, the books are mostly snappy dialogue and a movie could be made for cheap. My search was not profitable, but there was an interview with actor Jon Hamm from 2021 talking about taking on the role of Fletch in a new movie. I vocally gasped.

The movie in question was Confess, Fletch (based on the second Mcdonald Fletch book of the same name). Confess, Fletch was in my collection and I dove in deep. I finished it in two days, which is not a magical feat because it’s under two hundred pages. I thought it was great and patiently waited the movie’s release date of September 16. The movie seemed to be shrouded in mystery. It was less than two months away from release and there still wasn’t a trailer or poster. I searched the internet and ran across pages of Fletch freaks wondering where a trailer was and why it wasn’t being promoted at all. Or some grumpy-ass film purists who were mad because Chevy Chase wasn’t playing Fletch.

The trailer dropped in mid-August and it looked... fine. There were some goofy sound effects added in and John Hamm did a classic Chevy Chase pratfall. Regardless, I was going to attempt to see it the weekend it came out and hoped it would have some redeeming qualities.

September 16 came and it wasn’t playing in my city. I recruited my friend Ian to join me driving forty-five minutes away to a theater in an abandoned strip mall. I told the guy at the concessions counter that we drove many miles just to see a movie nobody ever heard of. “I work here and I’ve never heard of that,” he said while handing us our nearly two-liter-sized diet sodas. And nearly six  paragraphs later, I’ll finally talk about the movie.

Confess, Fletch starts with the titular I.M. Fletcher (Jon Hamm) walking into a Boston Airbnb apartment and finding a dead woman on the floor. He calls the police to report the murder. The police tell them he should be calling 911, and he replies something along the lines of, “Well, it’s not an emergency. The murder’s already been done.” That little quip sets the tone for Fletch’s dialogue for the rest of the feature.

The Boston police assume our smart-ass antihero is to blame for this murder but have nothing on him other than the body was found in the home he’s staying at. Fletch vocally dances around their accusations while avoiding the reason he’s really there.

For the past several what-have-yous, Fletch has been living in Italy. He only came back to Boston to help his girlfriend Andy  (Lorenza Izzo) recover some very expensive stolen paintings. Andy is the daughter of a wealthy count who has been kidnapped. She’s hoping to get the paintings back to pay for her father’s ransom.

Since Fletch once was an investigative reporter and definitely knows he was set up to find the body in his rented home, he attempts to weasel information out of anybody he suspects might know something about the murder. This includes an extremely stoned and accident prone neighbor (Annie Mumolo), the flighty ex-wife of the man who owns the home (Lucy Punch), and the even flightier owner of the home (John Behlmann). And in regards to the paintings, he talks up a germaphobe gallery owner (Kyle MacLachlan) and the very narcissistic and egomaniacal Countess (Marcia Gay Harden).

When Fletch isn’t perpetuating the façade of being someone else and chatting up the suspects, we see him sneaking around Boston while being pursued by a sleepy detective (Roy Wood Jr.) and his angry junior detective, Griz (Ayden Mayeri). They are the Wile E. Coyote to Fletch’s Road Runner.

The movie is clever, funny, charming, and pretty fast-paced. I listened to an interview with Jon Hamm in anticipation of the movie and it seems his natural wit bled into the movie. If he played it slightly more straight and less buffoon-like, he would be a perfect Fletch. All the characters were enjoyable, especially Kyle MacLachlan’s zany EDM-loving eccentric art collector. And comedian Eugene Mirman plays a security guard who loves bringing up The J. Geils Band in every scene he’s in. And surprisingly, the all-jazz soundtrack is pretty damn good. There’s even a Buzzcocks song snuck in there.

Does Confess, Fletch deserve prestigious awards? No. Some of the plot doesn’t make sense and the ending is kinda meh. But in its defense, the book has kind of a bland ending too. But damn, this movie did deserve a wider release.

My movie-date Ian had never seen a Fletch movie nor read a Fletch book. His take was that it was nice to see a whodunit comedy like Confess, Fletch in the theater. The more we talked about it on the lengthy ride home, the more I realized I enjoyed it. Does it deserve prestigious awards? No. Some of the plot doesn’t make sense and the ending is kinda meh. But in its defense, the book has kind of a bland ending too. But damn, this movie did deserve a wider release. I read one review comparing it to the also barely seen Kid Detective (2020), another whodunnit-comedy that was pretty excellent.

Just yesterday I read that John Hamm and the director Greg Mottola gave up a good portion of their salaries to finish up this movie. Both share a love for the Fletch books and I’m hoping some suits at Miramax will make enough money on this film to give the duo a shot at making another one.

I had a flutter of anticipation when this movie was announced. I love the first Clerks, repeatedly watched the cartoon, and always enjoy it when the two titular clerks, Dante (Brian O’Halloran) and Randall (Jeff Anderson) show up in any Kevin Smith thing. Despite how bad that thing is. Seeing those two is like seeing two cranks you grew up with. They are both pretty scummy characters, but I like their lo-fi antics. Back in 2005, I got way too excited for Clerks II. We saw it on opening day and it was complete garbage. I was hoping for those lo-fi antics without celebrity cameos coming into the restaurant. And what was that shit with the donkey show?

The trailer for Clerks III came out and much like Clerks II, it looked like complete garbage. But part of me was curious. It was only playing for a week in theaters through Fathom Events. For those not in the know, Fathom Events have special screenings at theaters across the nation. Sometimes they’re live events (IE RiffTrax Live) and some are retro screenings like the Blippityblop 35th anniversary screening. They always cost something like five dollars more than a regular ticket.

The curiosity finally got too much, and on the very last day it was playing, I decided I should see it. I did recently choke down Jay and Silent Bob Reboot (2019) and it was terrible, but not as terrible as I thought it would be. It had some redeeming moments. I figured Clerks III might get the same reaction from me.

My two friends Tina and Devon rolled with me to the theater with the same curiosity. There were six or so Gen-Xers (who probably thought Fletch should only be played by Chevy Chase) lurking in the seats. Since it was a Fathom Event, we got an exclusive introduction by Kevin Smith saying this was the cheapest movie we were going to see in the theater this year.

Clerks III starts with a My Chemical Romance song while we see Dante doing the same old shit, except he co-owns the store now. He pulls up to the Quick Stop, scrapes gum off the lock, makes the coffee, counts the register, and plays hockey on the roof. Jay and Silent Bob now own the video store and turned it into a cannabis shop. Randal walks into the Quick Stop and it’s like old times. Until Elias (Trevor Fehrman), the Christian kid from Clerks II rolls into work. Tagging along is Coltrane (Austin Zajur) as Elias’s silent doppelganger. Elias has a long spiel about NFTs and that’s the first sign that this movie is gonna be a stinker. Randal has a heart attack and is sent to the hospital where his doctor is played by Amy Sedaris, and it’s the only truly delightful celebrity cameo.

After Randal’s near-death experience, he decides he should make a movie about all the great things that happened in Clerks and Clerks II. The majority of Clerks III focuses on Randal’s movie featuring actors from the original movie reenacting their scenes from Clerks. I’m sure this was very fun for Kevin Smith and the cast, but not for me. They’re basically winking at the camera for forty-five minutes. Remember that guy who says “In a row?”!? Well, he says it again! The only enjoyable bits from these scenes are Elias and his crony have denounced Christianity and have become Satanists. With each scene, Elias’s goth/satanic garb gets more elaborate. Top hat, King Diamond makeup and all!

When they’re not making the movie within a movie, we get a lot of sad Dante moments. Dante is deeply depressed after losing his wife Becky (Rosario Dawson) and child in a car crash. She does show up as a ghost to console Dante. It’s somewhat endearing. And without getting too spoilery, the movie gets very heavy towards the end, so much that my crew got a little teary-eyed. And then it ends on another NFT joke. Woof.

During the credits, Kevin Smith’s voice starts talking to us, the audience, about how happy he is we saw this movie and has some kind words... about himself. Double woof.

Our consensus was “Who was that movie for?”

It was for Kevin Smith.

After the credits scroll, there were some behind-the-scenes footage and more Kevin Smith talking. We had our fill and left. Our consensus was “Who was that movie for?”

It was for Kevin Smith. I gotta give the dude props for getting away with making a movie that only he and a handful of his fanbase would enjoy. My pal Tina, also being from Jersey, liked the parts where they talked about New Jersey things.

So it was pretty bad, but I’m glad I saw it. The movie could have been Dante and Randal walking to work for ninety minutes and I would have begrudgingly bought a ticket. But man, I may take Kevin Smith to court and demand my five dollars back.