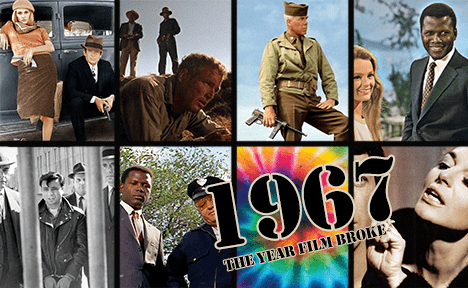 One Punk Goes to the Movies: 1967—The Year Film Broke by James Rosario

The ratings we see plastered on movie posters and displayed on film trailers—G, PG, R, et cetera—haven’t always been a part of the American movie-going experience. Before 1968, American films were subject to a board of reviews known as the “Motion Picture Production Code,” which acted as an agency of censorship. Scripts were read and movies were screened by the board, then deemed worthy or not worthy based on the content therein. If a film passed muster, they approved it for release. If not—usually because of depictions of sex, violence, or drug use—it was given a list of changes to be made before approval would be granted. From 1930 until 1968, this board had total authority over the motion picture industry.

However, by the mid-1960s, American attitudes towards the elements deemed morally corrupt by the Production Code were changing rapidly. The civil rights movement was underway and so was the Vietnam War. With violence, sex, and drugs spilling out of television sets and onto living room floors—not to mention the many foreign films hitting American shores that weren’t beholden to the censorship board—the Production Code was quickly becoming obsolete.

It was finally abandoned in 1968 in favor of a rating system like what we still use today, but not before a slew of films from 1967 pushed enough boundaries and made enough money to make very clear the writing on the wall. American cinema was catching up with the counterculture that was percolating on the coasts, and in the movie business, when there’s money to be made, the old rules go out the window.

“There’s two kinds of laws, honey: One for the rich and one for the poor.”

By 1967, there was no way to successfully stop violence from creeping into major American movies. The Vietnam War and the escalating protests against it were becoming major, unavoidable stories. As households around the country watched the horrors of war play out in front of them on the nightly news, “safe” films like musicals and westerns starring out-of-touch and out-of-shape right-wingers began failing at the box office. With the factory-like studio system in disarray and the rise in popularity of international auteur filmmakers, Hollywood was in desperate need to get with the times.

To do so, a handful of major films took a turn for the nasty in both content and theme. As a reaction to the violence Americans were witnessing in their living rooms and in the streets, a string of films were produced that, each in their own way, commented on the capacity for American brutality and its indifferent war machine. From the deceptively intelligent World War II death-fest of The Dirty Dozen (starring lifetime anti-war activist Lee Marvin) to the glorification and celebration of crime in Bonnie & Clyde to the utter depravity and unimaginable savagery of In Cold Blood, 1967 saw a sharp increase in body counts and bullets.

These films, though, did not strive to desensitize the public to new levels of violence (news anchor Walter Cronkite and his peers were already doing that), but act as a mirror to what was happening in the ever-shrinking world. They used violence to critique violence and in doing so, showed that the supposed moral breakdown of American society had, in fact, been underway for quite some time (all three films took place in the past and were, at least in part, based on true events). The only thing new about the viciousness depicted on screen in the films of 1967 was that it was being depicted at all.

“They call me Mr. Tibbs”

By the late-1960s, the civil rights movement had grown from boycotts, marches, and sit-ins to include groups like the Black Panther Party and the Nation of Islam. While Hollywood may not have been ready to espouse black nationalism, it was ready to face race in new ways.

In Guess Who’s Coming to Dinner, Sidney Poitier plays John Prentice, a black doctor dating a white woman (played by Katharine Houghton). Katharine Hepburn and Spencer Tracy (in his final role) play Matt and Christina, the young woman’s none-too-thrilled parents. What’s interesting about Guess Who’s Coming to Dinner (aside from it being hilarious) is that Tracy and Hepburn play classic upper-class liberals who, when confronted with a race issue that affects them, don’t quite know how to act. They’ve spent their lives posturing and now that they’ve been put on the spot, are forced to put their money where their mouths are.

On the other end of the spectrum is another Poitier vehicle from 1967, In the Heat of the Night. This time around, Poitier is a northern cop who finds himself stranded in a small southern town helping with a murder investigation. Rod Steiger plays the racist police chief forced to work with the interloper. While far from enthusiastic about the arrangement, the chief goes along because the crime at hand is well out of his league.

The reluctant admiration Steiger’s Chief Gillespie holds for Poitier’s Mr. Tibbs isn’t enough for him to overcome his deep-seated racism, but it allows him to examine humanity in a new light. He sees that perhaps this enlightened black man from the big city is, in fact, freer than his small-town cracker-ass. Gillespie is stuck in a job he hates and surrounded by ignorance, while Tibbs gets to go where he pleases. It frustrates him, but through it he comes to understand the true nature of freedom, even if he can’t articulate it or use it to change his views.

“What we’ve got here is a failure to communicate.”

Disillusionment and fatalism had been creeping into American films since the end of World War II—most notably in the film noir genre—but by ’67, anti-establishment anti-heroes began looking and talking much differently than their decades-earlier counterparts. For example, Bonnie & Clyde (played by Faye Dunaway and Warren Beatty) may have been a depression-era film about the famed outlaw couple, but its true meaning lies within the duo’s adherence to non-conformity and their eventual punishment for it. History may have sealed their fates, but director Arthur Penn’s use of opening title cards also foreshadowed them brilliantly (their names turn from white to blood-red).

The Dirty Dozen is outwardly about a hesitantly heroic band of misfits during World War II (the titular “dozen” were, in fact, all condemned men with crimes ranging from assault, to rape, to murder). Just below the surface, however, lies deep statements on America’s involvement in Vietnam, its drafting of mostly marginalized and poor men into that conflict, and the brutality our military is capable of. Not to mention, all but one of the condemned men sent on the central suicide mission is killed in action. The antisocial freak can’t survive anywhere, it seems.

Other films offer counterculture ideas without resorting to violence. In The Graduate, Dustin Hoffman plays Ben, a young man just out of college who has the world in front of him. The only problem is that he does not understand what to do next, nor a desire to do much of anything. The only excitement he finds comes in the form of an affair with an older woman (Anne Bancroft, who was only six years older than Hoffman), which only serves to deepen his depression and anxiety.

Hoffman’s Ben may buck the system by his refusal to play the game according to the rules, but it’s Bancroft’s Mrs. Robinson who is the real rebel of the film. Director Mike Nichols’ frank depiction of a woman’s sexuality—and not in an exploitative, free love sort of way—is what really sets The Graduate apart from the pack. Mrs. Robinson, while cold and possibly incapable of real human connection, is trapped in a loveless marriage and a boring existence. For a married woman of 1967 to challenge the status quo by unapologetically proclaiming she wants more out of life was unheard of. In the end, she may give in to societal norms but for a brief time, she was free.

Perhaps the best example of shifting attitudes towards distrust and anti-authoritarian ideas came in the form of Stuart Rosenberg’s Cool Hand Luke. Set in a Florida prison labor camp in 1947, Luke (Paul Newman) begins challenging the authority almost right away. Even though the system has condemned his body, they can never control his mind—a notion thought dangerous by the sadistic “Captain” (Strother Martin). As Luke’s indomitable human spirit affects the other prisoners, his punishments become more and more tortuous—both physically and mentally.

Rife with Christian imagery, Cool Hand Luke is effective in pointing out the hypocrisies of a supposed Christian society and the vindictiveness it’s capable of. Luke’s original crime was drunk and disorderly and damaging municipal property (he went around cutting the heads off parking meters), but he’s eventually guilty of much more in the eyes of the authorities. His petty crime is met with harsh punishment, but, at least at first, Luke seems fine with what he’s got coming. It doesn’t take long, however, for him to realize that the real punishment lies in not what’s being done to his body but to his spirit. In another display of violent fatalism, Luke cannot survive in a world of conformity and must pay the ultimate price.

“You made me somebody they’re gonna remember.”

Just one year previous, none of these films would have been released as we know them. By 1967, the eventual demise of the Production Code was a foregone conclusion, but it was these films, and others, which finally finished it for good. After 1967, American cinema entered a new golden age—one that was much more in line with the pulse of the American people and their growing disillusionment with war, racism, corruption, and complacency. These radical new films also lined up with what was coming out of the international scene—bold ideas created by innovative writers and directors who weren’t afraid to challenge the system or its ideas of morality and so-called decency.

In just a few short years, films like Easy Rider, Butch Cassidy and the Sundance Kid, and The Wild Bunch would further shake up the status quo and forever change the way we watched movies. To demonstrate just how far American cinema had come in a short amount of time, the 1969 Oscar for Best Picture went to a film about a pair of small-time hustlers on the streets of New York. The film was Midnight Cowboy, and it remains the only Best Picture winner to ever receive an “X” rating.