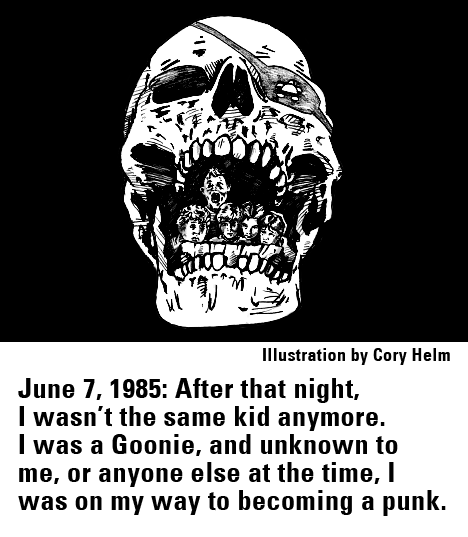 June 7, 1985 started like any other day. By that night, however, I was changed forever. For me, it was the tail end of first grade, and with summer looming, sitting still became nearly impossible. That evening, after an afternoon of running wild in the streets, my parents managed to stop my brother and me for a minute to tell us they were taking us to see a movie. “What movie?” I asked. “The Goonies,” my mom said.

I loved going to the movies, so there was no argument from me, but I had never heard of The Goonies. I figured it was an animated kids thing, but popcorn was popcorn so I shrugged and got in the car. When we got to the Safari Theater in South Moorhead, Minn., I saw a line out the door. It was opening night, and there was a crowd. Soon, we were inside the main entrance, and that’s when I saw the poster.

It was huge. It had a bunch of kids hanging from a stalactite, and there was a treasure map and a skull. It was awesome! I asked if that was the movie we were going to see, and when my hopes were confirmed, I got so excited I could barely wait. I think I started hopping up and down a little.

I don’t remember coming out of the theater, but I’m sure I was a wound-up ball of excitement. After that night, I wasn’t the same kid anymore. I was a Goonie, and unknown to me, or anyone else at the time, I was on my way to becoming a punk.

The Goonies, directed by Richard Donner, came out near the end of a wave of films marketed toward both kids and adults. Movies like 1984’s Gremlins, 1985’s Back to the Future, and Pee Wee’s Big Adventure had almost nothing in common with Disney-style family oriented entertainment up to that point. They were, however, making a hell of a lot of money, especially considering their meager budgets. Drawing kids in to theaters with action and high adventure had worked in the past, but now studios were drawing their parents in too. They had the kids and parents laughing at the same jokes, but perhaps for different reasons.

Starting with E.T. the Extra Terrestrial in 1982, and continuing through Back to the Future in 1985, kids had it good. While themes were often darker and more complicated, it was the language and “adult situations” that really set these films apart. In these movies, kids swore, disrespected authority, and were criminally independent. They did what was right no matter the consequences, and they kicked ass doing it. They were often outsiders who banded together in the face of rich dicks and asshole jocks. In short, Marty McFly was much more relatable than the clean-cut, all-American of films past, simply because he was more realistic. And so, to any kid who ever spent their summers on bikes and finding adventure wherever possible, the ragtag group of misfits known as The Goonies were the coolest, realest, and most badass group of preteen motherfuckers they’d ever seen.

The magic of The Goonies is that after seeing it, we all became Goonies. We were part of the gang. They were us, even if our house wasn’t on the verge of being torn down, or we lived on a Midwest prairie where there were no pirate ships (although we did have a Viking ship museum). Their gumption and bravery were to be aspired to, and while they may have used bad words and lied to their parents, their sense of right and wrong was unquestionable.

They also had a sense of community that transcended race and gender. They didn’t care where you were from, just that you were decent. They were also DIY as hell. These are all very punk ideals. Richard Donner and writer Chris Columbus are not punks, but they managed to tap into a very punk rock mindset, I imagine, completely by accident. This is simply because these very punk ideals also happen to be very human ideals. Punks are very good at seeing the difference between right and wrong, and the Goonies, while not being punks in the traditional sense, share this ability.

It’s a common theme in movies aimed at children for the kids to take matters in to their own hands. When ineffectual adults have either thrown in the towel or are incapable of seeing the problem in the first place, it’s up to the plucky kids to take charge. The Goonies is no different in this regard, but what makes it so damn appealing to punks and to kids who, in 1985, would go on to become punks is that they accomplish this completely on their own. No adult or authority figure can stop them or even slow them down. When the gang rides their bikes (on their way to untold dangers) past Mikey’s dad, they all wave but barely look up. It’s clear that dad (played by Keith Walker) would have been completely powerless to stop them anyway. I’m not sure he even cared.

In fact, most of their parents aren’t even seen until the film’s end, making it appear as if they live in a world free from any form of parental interference or guidance. What a world that would be! They make up their own rules, and they live by them. Even Brandon (Josh Brolin), who is a bit older and supposed to be “in charge,” is incapable of stopping the Goonies when they put their mind to something. When he attempts to assert his authority, he’s hogtied, then forced to ride a miniature child’s bike to catch up. This devolves him back to being a kid (which he is anyway, he just thinks he isn’t). Once he’s resigned to the adventure, he’s just as scared, brave, and moral as the rest of the Goonies. He’s stopped posturing and become his true self, a kid with a strong moral compass.

Greed and the pursuit of wealth is a major theme of the film, and a major fixture in punk rock. First, there’s the Fratellis (Anne Ramsey, Joe Pantoliano, and Robert Davi), a family of bank robbers, forgers, and murderous criminals who pursue the Goonies through the caves of the pirate, One-Eyed Willy. Next, there’s the evil land developer (Curtis F. Hanson) who’s hell-bent on tearing down the Goonies’ neighborhood to make room for a golf course. Then there’s One-Eyed Willy. His own greed got him trapped in the caves to begin with, and led him to set booby traps to protect his treasure and murder his men to keep them from it.

The Goonies, on the other hand, have a very unselfish attitude toward money. When Data (Johnathan Ke Huy Quan) discovers the forgery equipment in the basement of the restaurant, his first reaction is that they have the money to save their homes, not “We’re gonna be rich!” Same goes for when the wishing well is discovered. At the end of the film, when the kids are reunited with their parents, Mikey (Sean Astin) isn’t disappointed that they lost the treasure—he’s disappointed that they failed to save their neighborhood. These things stuck with me and helped shape my attitude toward what wealth really is, and what’s most important in life. It planted subconscious seeds of anti-capitalism in countless future punks.

The Goonies are also a very inclusionary bunch. Assuming you’re not a rich asshole who’s trying to bulldoze their house, or a group of killers, you’re invited along for the ride. The two girls, Andi (Kerri Green) and Stef (Martha Plimpton), are readily welcomed into the fold, even though Andi is from the rich side of town and is known to hang out with Troy (Steve Antin), the son of said rich asshole. That they’re female is of no concern to the Goonies, which contrasts the sexist and misogynistic Troy, who tries to adjust his car mirror to see up Andi’s skirt.

Mouth (Corey Feldman) is known to bully Chunk (Jeff Cohen) about his weight on occasion—who could forget the “truffle shuffle” scene—but he is largely kept in line about it by the other Goonies. Mouth, so named for his inability to shut up, is regularly called out for his behavior, demonstrating that the Goonies don’t tolerate that type of ostracization.

Then there’s Sloth (John Matuszak). When Mikey first discovers him in the basement of the restaurant, he’s scared, but also curious. What he describes as an “it” is chained to the wall and howling. His fear is justified, but what’s amazing about the scene is that even through this, Mikey feeds the creature, who is clearly hungry and suffering. He sees Sloth as someone who is perhaps in need of some help, not as just a terrifying monster. Later, when Chunk is tied up in the same room with “it,” it takes only a moment for the two to become friends. Chunk sees right through the outward and straight to the inward. Sloth, who is shunned from civilized society just like the Goonies, is instantly accepted by them. His appearance is never questioned. He’s a hero, and they can see that from the moment he appears on the Inferno with Chunk. As with any good punk scene, the Goonies have very inclusive politics.

Movies have a way of subconsciously planting ideas. I wouldn’t get into punk rock for another six years or so, but The Goonies and their outlook on life has stuck with me to this day. Would I be a punk if it weren’t for The Goonies? Probably, but they helped show me how to be a good person at a very young age. They’re an independent, non-judgmental, egalitarian group of kids who strive to help those in need. That’s something to aspire to, and that they swear and get shit done with a DIY attitude is simply icing on the cake.

So, mom and dad, you can thank The Goonies for starting me on my way to becoming a punk. If you only knew what you were getting into on that day in 1985.

James Rosario is a film critic living in Asheville, NC. He loves punk rock and movies, and especially when the two collide. He can be reached via his blog, thedailyorca.com