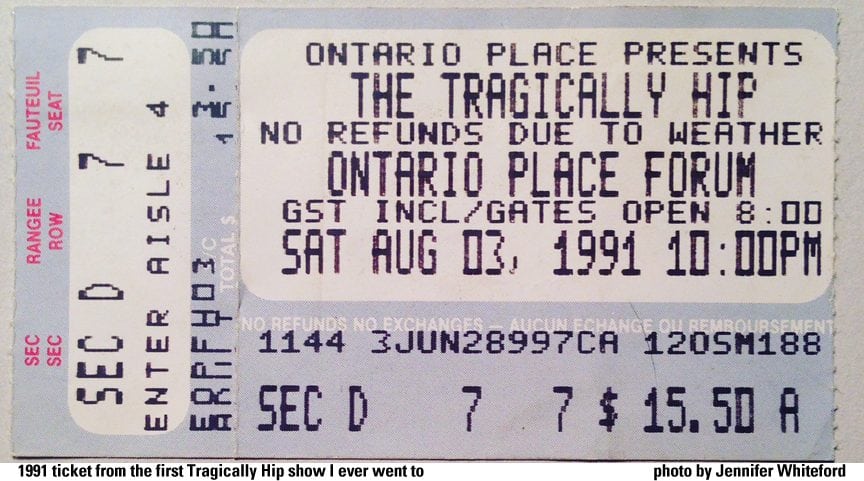 “And of course I’m excited about playing in Winnipeg because I love the Weakerthans.”

Lauren from Worriers stood with my friend Megan and me on a hot night in June talking music, talking touring, talking Canada. We three slightly shy and awkward people had somehow consumed the exact amount of beer needed to slide us into an enthusiastic and inspiring conversation.

“Ah,” said Megan, nodding. “That makes sense.” She turned to Lauren, “Do you know that band?”

Lauren didn’t. It wasn’t a surprise. The Tragically Hip is one of those things that are part of the fabric of our lives in Canada, which somehow hasn’t ever translated in the same way south of our border.

Minutes earlier, our mutual friend Dave Williams had appeared and explained his previous night’s experience at the emergency room. After he’d described his doctor visit and subsequent stitches, Lauren held out a hand and asked a question. “And that was free, right? That was all free?” It took us a minute, but we laughed and nodded. We forget that getting “free” medical treatment on demand is something special.

The Tragically Hip, though almost completely unknown in other countries, has been a comforting, steady presence in the Canadian music scene since the late 1980s. They are not unlike our national healthcare system. Always there, comforting, easy to ignore for short periods of time, and desperately appreciated when needed. An early memory I have of them is sitting under a cafeteria table during a spare period in eleventh grade, their Road Apples cassette on my Walkman, listening intently to the songs while reading along on the lyrics sheet.

The band member who got the most attention was always lead singer and lyricist, Gord Downie. He danced like a maniac at shows and spoke weird rambling poetry between songs. They weren’t really a “cool” band at that point—popular enough to get some radio play and have videos on Much Music (rough Canadian equivalent to MTV), but not yet a major act. Some of my friends showed some interest in a few of their songs, but the Hip, as they are often called, didn’t come close to The Smiths or The Ramones where our appreciation was concerned.

In the years between my cafeteria Walkman days and our lives now in 2016 (twenty-five years for those who must know), The Tragically Hip continued to release albums. They never broke up, changed band members, or took any significant hiatuses. By the time I finished university they had—somewhat inexplicably—become a band favored by what I would have called “frat boys,” even though fraternities are fairly rare in Canada. I don’t think anyone felt like it was the band’s fault. They played the same kind of music as they always did. Gord Downie put out a book of poems. Their lyrics were still rife with literary and historical references. But some fans stayed away from the live shows. A lot of us lost touch with the band for a while.

What brought me back was an album they released in 2009 called We Are the Same. It’s one of their lesser-known records, but it is easily the band at its best. It’s full of smart, sprawling, beautiful songs. The lyrics get more poignant to me with each listen. After I discovered the album, I listened to it on a weekly basis—often when walking or driving somewhere. Like all Tragically Hip music, it was comforting and thought provoking. Somehow familiar too, without being boring.

So that’s where I was as a fan when I woke up one morning to the news that Gord Downie had terminal, inoperable brain cancer. I surprised myself by bursting into tears. And now I can’t remember how it felt to be on the other side of that news, because that news changed everything. Before that morning, the Tragically Hip was just a band. One on the list of bands I liked who’d been around in the background of my life for years. The cancer announcement gave them what it never seemed they’d have: an expiration date. Suddenly, their career wasn’t this looping, endless journey that wandered in and out of our collective Canadian consciousness; it was something finite to be reflected upon and analyzed.

When the band announced the dates of its final ten-date stadium tour, the shows sold out in less than five minutes. The cancer news and tour dates sparked not only critical retrospectives of the band’s career, but also what felt like nationwide mourning. I have to acknowledge here that this event and its resultant solidarity feel to me like they affect “everyone,” but obviously they do not. My parents, for example did not have significant feelings about this band. My children didn’t either. Neither did my friend from Finland or my son’s Lebanese daycare provider.

The friend who attended the final Ottawa show with me did so because she is married to an American, who she claimed she “couldn’t trust with this experience.” However, as the final tour rolled across the country and concluded with a nationally broadcast final show in the band’s hometown of Kingston, Ontario, it really felt for a few days like almost everyone I knew was talking about these concerts. On the night of the final show, my social media feeds were flooded with everyone’s photos of their various viewing parties. Lists of the hundreds and hundreds of public viewing events were shared nationwide. Set lists were speculated upon; everyone had songs that they needed to hear before it was too late.

The night back in June, when we stood talking to Lauren about Gord Downie’s music and cancer and poetry, Megan and I both got giddy with the excitement of sharing such a profound story with someone who had no idea that this band even existed. Lauren spurred us on by being completely absorbed by our description of these musicians’ profound national impact. “Well, now I have to hear the Tragically Hip!” Lauren declared as we all finished our beers just as Worriers were called to the stage. That night at home I burned a copy of We Are the Same for the whole band to listen to as they drove to Toronto the next day. I handed it over with the disclaimer, “I don’t even know if it’s good.”

Because I don’t. I will never be able to listen to the band’s music in an unemotional and objective way again. From the moment the morning news informed me that Gord Downie was dying, I was on an emotional carnival ride with the rest of the country, not sure when everything would stop spinning—but dreading that moment regardless.

I am not usually a joiner. In fact, I almost always have a knee jerk impulse to reject whatever is popular. But I had none of those feelings as the Tragically Hip tour dominated the Canadian news media. I went to the penultimate concert of the tour here in Ottawa and didn’t mind the busy parking lot, the shouting crowds, or the crappy beer. None of it mattered. I was uncharacteristically able to ignore things that were annoying in favor of listening to a stunning band play beautiful songs.

Two nights later I watched the last show of the tour live on CBC television. The network forewent their Olympic coverage in favor of airing the show in its entirety, commercial-free. The Prime Minister of Canada, Justin Trudeau, arrived at the venue wearing jeans and a Tragically Hip shirt. He stood and cheered with the rest of the crowd while the band played. A photo of him hugging Gord Downie pre-show went viral. Between songs, Downie praised Trudeau, but also issued a firm reminder to the PM that he’d campaigned on a promise to address issues of poverty and injustice in Canada’s northern indigenous communities. “It’s really, really bad, but we’re going to figure it out, you’re going to figure it out.” It was a heartbreaking statement and a selfless act, a dying man spending a few of his last public minutes trying to inspire people in power to make life better for people who have been without the power they deserve for many years.

In the final two concerts, Gord also addressed the aforementioned frat boy problem. At the Ottawa show he spoke briefly about the history of the band’s fan base and said, “For a while there, you were a lot of dudes.” He went on to say he was thankful that the female fans “came back” to the band eventually, and thanked us for that. For me, it was heartwarming to be welcomed and acknowledged as a female music fan—another example of Downie caring about something that would have been easier for him to just ignore. He didn’t have a lot else to say at that show, but he did bring almost everyone in the stadium to tears when, at the end of one song he paused, looked at the crowd and said, “Carry on, okay?”

Since that final show, I’ve done a lot of reading about the band and its history. Something that has really warmed my heart is the number of times when they responded to questions about being “Canada’s Band” by saying something along the lines of, “Yeah, sure there are lots of great things about Canada but, hey, there are also a lot of crummy things about our country.” They refused to pander to any kind of mindless flag-waving and by doing so, at least attempted to inspire critical thinking in their legions of fans. That’s the kind of action that makes people want to be better, smarter, and kinder. That’s what I saw in them as a fifteen-year-old fan crouching under cafeteria tables with their cassette on my Walkman and it’s what I see in them as a forty-one-year-old mom, playing their songs for my four year old as we drive around town and I answer his questions about who this singer is, and why is he so sick, and does that mean the band will have to find a new singer?

Some things just can’t be replaced. We’re sad to lose them, but happy to have had them. And when you know they’re almost gone, all you can do is listen, remember, tell stories, and sing songs.

“Wheat Kings”
“Ahead by a Century”

“The Depression Suite”
“Three Pistols”
“My Music at Work”


Further reading:
Gord Downie's demand for Courage
Why one fan says the Tragically Hip is a feminist band and not just for 'bros'
The politically hip Gord Downie