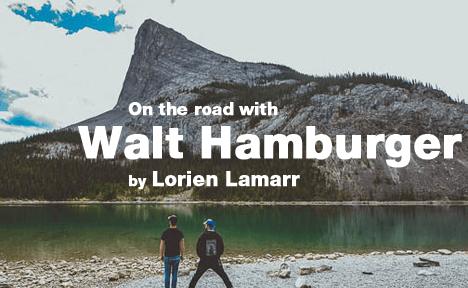 On the road with Walt Hamburger by Lorien Lamarr

Walt Hamburger used to be best known for his role in the punk trio The Hamburgers. Working merch, at least once per show I explained that Hamburger was not Walt’s given surname, saying “It’s sorta like Joey Ramone, except instead of Ramone, he’s a Hamburger.” Since then Walt has gained international attention as a solo act.

Walt’s music fits in with that genre of “I’ve fronted a punk band, now I sing with an acoustic guitar” that many of his One Week labelmates exemplify, like Chris Creswell and Zach Quinn. The style is a bit more folky singer/songwriter focused, but lyrically engaging. I’ve often thought punk was a genre for poets, where the message of a song takes precedence over the musicality. That strong sense of lyrical storytelling carries over to solo work well. Walt stands out in that group, not only by his bright blue hair, but also through his incredible whistling, which he uses like another instrument to complement the vocals and guitar melodies. He’s also got a pick-based (non-finger) finger pick, which I can’t quite figure out how he does, but it’s captivating to watch. While he touches the standard topics like drinking or a haunting former relationship, he’s not limited to them. I particularly enjoy the song about Batman’s scientific achievements. The most requested song on this tour was “Three Tattoos,” which has a fun, speeding crescendo to it. For an extra in-depth experience, I made a spotify playlist to give some color to this diary. (Also, One Week just recently released their content to Spotify!)

I met Walt in 2018 when he opened for a Feed The Scene show I worked on with the Dead Milkmen. The Dopamines also played on that show and were up partying Dopamines-level late with Dopamines-level intensity, occupying the same room at Feed The Scene that Walt would purportedly be sleeping in, assuming any sleep was possible. (It wasn’t.) When I excused myself to leave and get some sleep, I asked Walt if he wanted to use my spare bedroom. I live only a few blocks away. He had his pillow and bag in hand before I finished my sentence. Then a series of snowstorms and flight cancellations stranded Walt with me for several additional days. By the time he boarded his flight, he was best friends with my cats and I had a video of his face, post-Malört shot. So when this tour came up, Walt asked if I’d like to try out tour managing with him in Western Canada.

I’ve been frequently told I would be a good tour manager. It seemed to be a natural combination of skills I already employ. Throughout this tour, I took on roles, such as:

And with this article, I’ll add PR. It’s a lot of tasks and working with people. I feel like my best assets are being organized, responsible, and friendly. It helped a lot that I’m sober, and not just because that easily enables night driving after the show.

Getting through customs and flights can sometimes be a challenge, especially with half of us (me) coming from Baltimore and the other half from Appleton, Wis. (Walt), but thankfully we arrived in Canada without issue and with all of our luggage. Our first show was in Edmonton, so we began by renting the car that would be our home for the next two weeks and driving three hours north.

The Buckingham is one of the coolest bar/restaurant/venues I’ve ever been to, not just in Canada, but anywhere. It’s vegan. It’s got shows. It’s got Napoleonic portraits of famous musicians and actors. You know, all the bases covered. I wasn’t able to try the fried chicken (essentially a gluten bomb), but I jealously watched Walt devour it. The Buckingham felt like the center of a very friendly and inclusive community with ethics I support. I felt very at home there. James Renton (Fire Next Time) explained his merch design to me and I’m still fascinatedly researching “seance photography.” Thanks for welcoming me into your community, Edmonton.

Next stop was Dickens in Calgary, where Walt, an acoustic act, was sandwiched between a variety of skate punk and melodic hardcore bands. I wasn’t sure how well this would go over, but Walt definitely won the crowd over with expert whistling. It also helped that No Fun At All was, name aside, a riotous good time. This meant that the merch booth was very busy, which is good for me selling merch, but I have some feedback.

Dear concert-goers, the merch-selling person is not your captive audience for drunk ramblings. Moreover, if you ask that person if they have somewhere to stay for the night and they say, “Yes, I’m good. Thanks,” that’s the end of that conversation. By time four and five that I’m asked where I’m sleeping, I’ve begun to fear for my safety. If after five or six of the same answer from me, you then ask the artist where I’m sleeping, I’m justifiably fearing for my safety and offended because I make choices about where I sleep for myself. Please don’t be this person. Thank you.

I got a tip from KJ Jansen (Chixdiggit) that if we took a short detour on the road to Medicine Hat we could see dinosaurs, so I arranged our schedule to accommodate the fastest visit to the town of Drumheller for a whirlwind museum tour. Essentially, we ran through it, bouncing, like grown children with ADD. We were still giddy on fossils and PeeWee’s Big Adventure when we arrived at Industry Pub.

I knew we were in for a good time when we walked in and the place was full of crust punks. We had Walt doing impromptu table serenading encores and standing group singalongs. Canadian politeness is a thing to behold. I thought I wasn’t going to sell much merch, because folks didn’t queue up. Instead, they patiently waited for the person talking with me to finish before approaching themselves.

Our next drive took us into the mountains. After about 1,000 km of prairie landscapes, I was getting road hypnosis from straight flatness. It’s shocking how quickly the environment changes and how drastically. It’s not like, “Oh, suddenly there were a few hills”—it’s vast farmland and then BANFF, which I think is an onomatopoeia for the experience of those mountains. They hit you like BANFF. We met up with Seth Anderson (One Week Records) in Canmore to play a cozy mixed set in a recording studio above a flooring store. This spot had a real homey house-show vibe with sofas and armchairs. The next day, Seth took us out into those mountains, where I definitely accidentally scared another driver twice on two different mountains with my enthusiasm to speed to the top.

From here, the roads became distractingly beautiful. I drove through a mountain with rams along one side. Waterfalls as far as the eye can see. At one point, we were definitely driving over and on top of a rainbow. In Golden, Walt played the Rockwater Grill & Bar, a venue that had rooms above it. We were excited to sleep free above the venue until we discovered the windows didn’t close and it was three degrees. So, essentially, we camped outdoors. While I’ll absolutely take free housing anywhere we can get it, I prefer it to be safe and indoors.

Continuing West, we arrived in Kamloops, BC, just in time to grab a pizza at Pizza Pi before the show. The community here was engaged and energetic. I got to meet internet friends and make new ones as folks started singing along. One attendee yelled out that next time we came through town we could stay with them, only to be shouted down with a chorus of, “Bro, you don’t even have a house.” I think that sentiment exemplifies the hospitality we found throughout Canada.

We had a day off in Vancouver where I hiked Lynn Canyon and Walt visited with friends around a firepit. It’s important on the road to take some personal time when you can between shows. We also did a quick pit stop at Catfe, a cat cafe, before we played The Heatley. Walt runs a charity that supports animal rescues, which many cat cafes function as. Vancouver had my favorite local opener, a duo from The Corps! who played songs about comic books and had the formula for standup comedy between songs down to a science. The were actually flying out to open for Propagandhi the next day!

The last leg of our trip was by far and away the most difficult. First, I drove us to Kelowna, arriving just in time to watch the sun set over the lake as we approached. We played Kettle River Brewing, a brewery/restaurant/venue in a warehouse district of the resort town. It was a bittersweet set. As enthusiastic as the crowd was, we couldn’t stay and chat like we normally would, because we had to get immediately back on the road. I drove straight through the night back to Calgary. This is a spooky drive back through those same beautiful mountains we’d seen days before, but without streetlights, in total pitch black darkness. Walt documented this hourly on his instagram stories, probably to give him something to keep himself awake with me.

We survived and arrived to play our final show at Ship & Anchor in Calgary again with Seth Anderson and, again, with internet friends that I got to visit in person. Overall, I think that’s my favorite part of a road tour—visiting with internet friends and making new ones in communities I otherwise wouldn’t get the opportunity to visit. KJ invited us to wind down from tour around a firepit at his home after the show.

Overall, I’d give myself a solid B- for my first tour. Everything went really well, I think beyond as well as Walt anticipated, but I was clearly learning as we went along. I was always a straight A student, so I have unreasonable expectations about being able to immediately master something I’d never done before. Next time, I think I’ll have a better system for organizing merch and tracking cashflow. I’ll also bring my phone mount that hooks into the car’s air vent. When you’re using the phone for GPS navigation, having that easy-to-see mount helps a ton, especially after 2,000 unfamiliar miles.

No tour diary is complete without embarrassing stories, so just know that Walt takes tissues from every hotel, motel, or outdoor above venue camping room, so you’ll be carting around four hundred tissue boxes by the end of the tour. Also, and this is verbatim, “As long as I have ⅔ of the total available pillows, I’ll be fine.” So be prepared to lose pillows. Thanks, Walt!