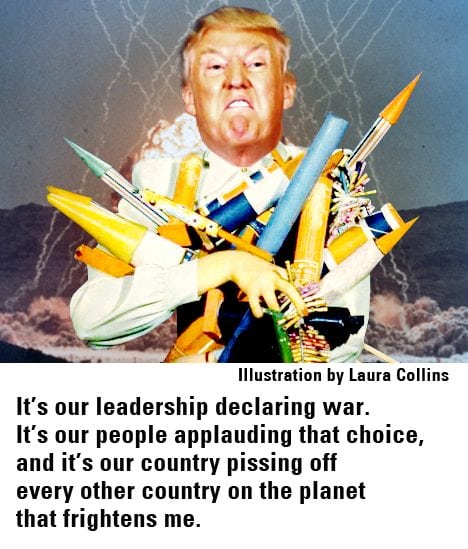 It’s my favorite time of year. The oppressive heat from the sun that’s inching closer and closer to us every day is starting to slowly taper off. Mornings are slightly cool, comfortably welcoming me into a new day rife with possibilities. The faint breeze at night is soothing, calming me into a restful, contented sleep. And Earth seems to be offering up new and interesting gifts and opportunities to me each and every day.

It only makes sense that we’ll probably get nuked and I won’t be able to see any of these opportunities come to fruition... Yes, you guessed right. I’m going to make the threat of nuclear war all about myself.

As I’ve previously mentioned, ever since I was about nine years old I had an intense fear of the apocalypse. I blame it on the mix of studying the Book of Revelation in my religion class and the threats brought forth from Y2K. The haunting reality of things ending the way they started—with a big bang—creeped its way into every thought of my juvenile mind. These thoughts only grew more and more as time went on—culminating in nightly panic attacks after the events that took place on September 11. Nothing could ease my mind from the idea that World War III could happen at any moment, even teachers and political analysts explaining all the reasons how and why it wouldn’t happen.

I couldn’t imagine being a pre-teen today.

We have a political figurehead who casually throws around the possibility of a nuclear showdown as if he’s calling out a celebrity he disagrees with on Twitter. World War III is trending on social media. People are Googling bunker options. The threat of a nuclear apocalypse is practically at our fingertips. We’re all connected—for better or worse—and there’s no break from the news, from the fear, and from the worry that both divides and unites us.

I still get fearful. I get outraged. I get upset. But most importantly, I remember what it’s like to be a kid, hearing adults casually throwing around the word “war,” acting as though it’s a chore like folding laundry or doing the dishes, and overhearing news anchors and political mouthpieces discussing the “bad guys” and catastrophic events that could happen merely by the push of a big, red button.

And lately it seems like we’re making the rounds with every person and country I once feared. In junior high school my understanding of the delicate balance of world affairs was simple: no matter what happens, no matter what wars are waged and battles fought, nothing truly major will happen so long as we don’t piss off Russia. The slightest mention of us meddling with Russia filled me with dread.

Throughout high school and college, every new threat posed by North Korea spiked my heart rate and made my stomach do back flips. Every single post-9/11 yellow, orange, red, purple, and heliotrope terror alert put my brain on high alert until I’d lay my head to sleep, thankful that no terrorists succeeded in blowing up another major metropolitan city.

But unlike how I felt then, the “bad guys”—the enemies—don’t seem so far away. Terrorists and extremists invading our country, shooting missiles onto our soil, flying airplanes into our buildings—that’s not what worries me. It’s our leadership declaring war. It’s our people applauding that choice, and it’s our country pissing off every other country on the planet that frightens me. It’s the thought of innocent men, women, and children losing their lives by getting caught in the crossfire of ground warfare.

And it’s people who look like me—or look like people who could be related to me or have gone to school with me—taking this time of uncertainty to rally together to champion their collective hate. It’s the people who are so afraid of losing what’s important to them—namely a sense of continued pride and entitlement—that they’ll literally kill to maintain it. It’s the harsh reminder that sometimes the enemy is from within. And maybe it’s not a nuclear arms race with another country that we should fear, but a nuclear civil war from within.

Basically, there are a lot of reasons to be really fucking frightened right now. But it’s also a time to try to look outside ourselves and understand how this fear affects everyone differently.

When I scroll through my Twitter feed, I see a lot of my peers and people older than me whose opinions I greatly respect yelling into the internet void of fear and paranoia. I see a lot of my comedy friends posting casual jokes about the end times. They’re not wrong for being worried. They’re not wrong for handling their fear the best way they see fit. And I’m not wrong for not wanting to hear or see it anymore. I’m not looking to shut out the world and ignore the news, but I also no longer want to see people acting as cogs within the wheels of the giant fear machine that fuels this country.

One thing that always tempered my fear and panic as a kid was long talks with my grandmother. No matter how worked up I got, she’d always know exactly what to say to make things seem less scary. She’s not here anymore to calm me down, so it’s all up to me. I find myself researching, then rationalizing, then over-rationalizing to a point where I’m no longer fazed by anything, instead joining in on the fun by making flippant jokes about the state of affairs as a means of coping.

But it doesn’t make the worry go away. In the rare occasion I check social media outlets like Twitter, I know I’m going to be inundated with news and opinions, which is fine, but the fear-mongering just transports me back to being a nervous, anxiety-riddled nine year old. I can’t help but wonder what it must be like to be a child now, hearing all of this from news outlets, seeing the panicked posts and jokes online, overhearing conversations from adults who they trust and look up to who are just as scared.

I owe it to the kid and me to be the strong adult I needed back then. We all do. We’re all allowed to be scared and worried and unsure—but we should also think about how this fear translates and who stands to be the most hurt by it. It doesn’t mean turning our backs on what’s going on in the world. It doesn’t mean not speaking up to inspire change. It means taking half a second to think about your panic-addled words before hurling them out into the world, because when our so-called “leaders” and decision makers are doing everything they can to inspire that fear and hate within us, we need to be the ones to stand up to it.