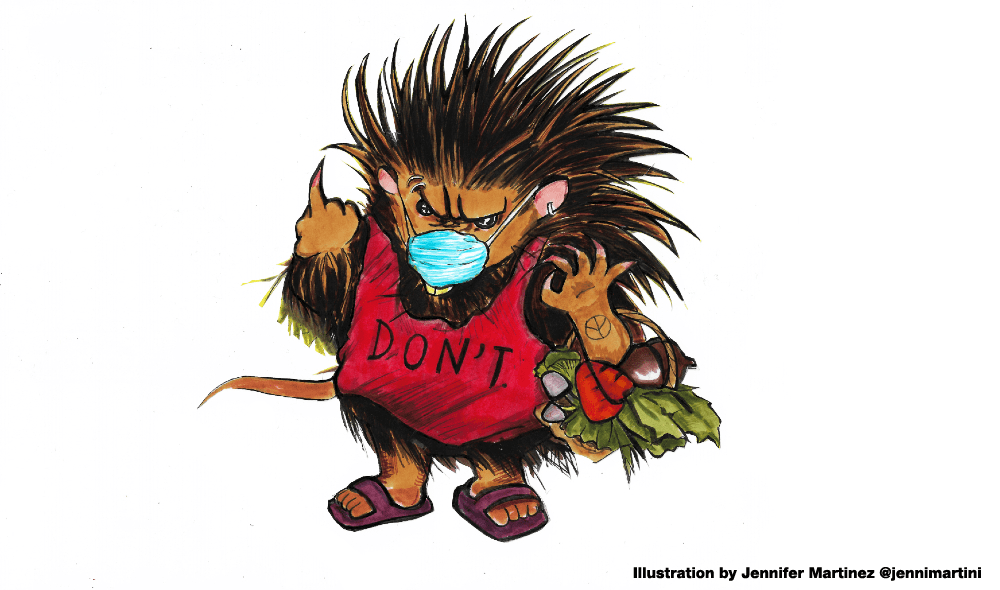 As I stand on the precipice of receiving my first dose of Pfizer, I’ve never felt more excited in my life to get jabbed in the arm (and I’m someone who is remarkably frightened of needles). Save for a few anxiety dreams I’ve already had about missing my appointment, this is the first thing I’ve really looked forward to in a while.

Which means, of course, that it’s time to think ahead to what comes next and how much that’s bound to suck.

In a year that left me devoid (mostly) of creativity, social activity, and, at times, any will at all to get out of bed, I’ve had a lot of time to stew. It’s amazing how many things you can find wrong with just about every person, place, and thing in your life when you’re left alone with your thoughts for months on end.

When people say they dread rejoining “the real world,” I get it. But not because I’m afraid of germs (I am, but there are still some controllable factors at play there; even after my vaccination, I’ll still be hypervigilant about sanitizing and wearing my mask at all times, and I don’t envision myself joining many people indoors for the foreseeable future), I’m just afraid that the self-righteous bubble I’ve created for myself will have to burst. That I’ll have to let people with views I find—or people whom I find—damaging and toxic—in, just so I won’t be isolated forever. That creeping back into the social world means having to make time for people I’d rather not see.

You know, things pretty much going back to normal.

Here’s the thing, though—a lot of what’s caused me anger are the situations I elaborate on in my mind, not necessarily the overt actions of people. It’s not that people have acted in horrible ways toward me. It’s not even that they’ve said or done things to show they may have views that would turn them into people I’d rather not associate with. It’s from the passing moments that keep cropping up in my thoughts when I’m left with no one to converse with but myself, which is a daily occurrence when you’re working remotely.

And it’s not the persistent thoughts about their relationship to me and vice versa—if anything, it’s about their relationships toward others. Toward the world in general. Friends who didn’t show up perfectly during this pandemic will forever get my scorn in varying degrees, in relation to their lack of inaction or direct negative action. This year has taught me a lot about myself and what I’m willing to put up with. It’s created a fast-track towards cutting out people whose behavior I always knew to be toxic but, putting it all out on display in the midst of a global pandemic, it’s harder to deny or shove aside for the sake of avoiding confrontation.

And yet, cutting people out doesn’t mean they don’t still reside in my head, “rent free,” as the kids these days say. I’ve played moments and moments over in my mind, like an old VHS player on rewind (but decidedly NOT kind). I’ve tried to make sense of things that have happened and how they’ve affected me, even if the ire wasn’t directly at me. I’ve realized that I can put up with a lot of bullshit, but seeing someone else hurt or disregarded? That’s something I can’t stand for. I try to move past it and put my anger into doing good wherever I can, but sometimes that anger gets so consuming it leads to more stewing, which leads to exhaustion.

Ultimately my choices are my own, and only I can truly determine what’s best for me.

These are all things I have to work through on my own. My relation to situations and the way I react to them are my own, not everyone’s. And sometimes an explanation for wanting to distance myself from someone or something isn’t simple—it’s convoluted, complicated, and never a simple decision to come to. Not everyone may understand it, and maybe it’s not my job to make other people understand or side with me. But ultimately my choices are my own, and only I can truly determine what’s best for me. And these choices to stray from others or create a bubble I’m comfortable with have been relatively easy to do during a time when seeing people is off the table anyway. Could my mind change about people I’ve been in a constant state of anger and confusion at change someday? Sure, but the creeping pressure of social interaction makes all those feelings stronger and, inversely, causes me to want to revert even more than I have per the CDC guidelines.

I think a lot of people have been woefully misguided about how to act during this pandemic. I can be angry about that, but I don’t know what the expiration date of holding it against them looks like. A lot of people have been lost and confused, either from isolation or from forced interaction because of a lack of support when they needed it the most. I can be open-minded and not so set in my judgments of others that I end up not only hurting them, but causing harm to myself as well. That may take some time to work through. And while many have spent this year working on themselves, the echo chamber of me, myself, and I sometimes isn’t the best focus group for workshopping my issues with others. It’s a double-edged sword, getting angry at others when I have no one else to talk to about it, and then getting angry at myself for letting others talk me out of ways I think I should be feeling. This is what dreading post-pandemic life is all about for me: the frightening prospect of figuring out what reentering society looks like and imagining the worst scenarios;, believing those to be the only ones possible.

There’s one thing I am certain of, though: my tolerance for intolerance is nonexistent

There’s one thing I am certain of, though: my tolerance for intolerance is nonexistent and will not be changing for the sake of social niceties. And that’s something I’m proud to work on in this time of isolation.

People are going to have views that are different from mine. But if those views extend beyond basic opinion-based differences, and instead into human rights and treating people with decency, silence is not an option. Avoiding those people will not make them go away. Part of rejoining society, to me, means going the extra mile to make society a better place. And the first step is by calling out injustices and downright dick comments when I see and hear them. I will not be tolerant towards hate speech, no matter how “inoffensive” people may make it seem.

And if that bothers people? Good. It should. I’ve spent a long time trying to be convenient for others. I no longer have time for that in my post-vaccinated social calendar.