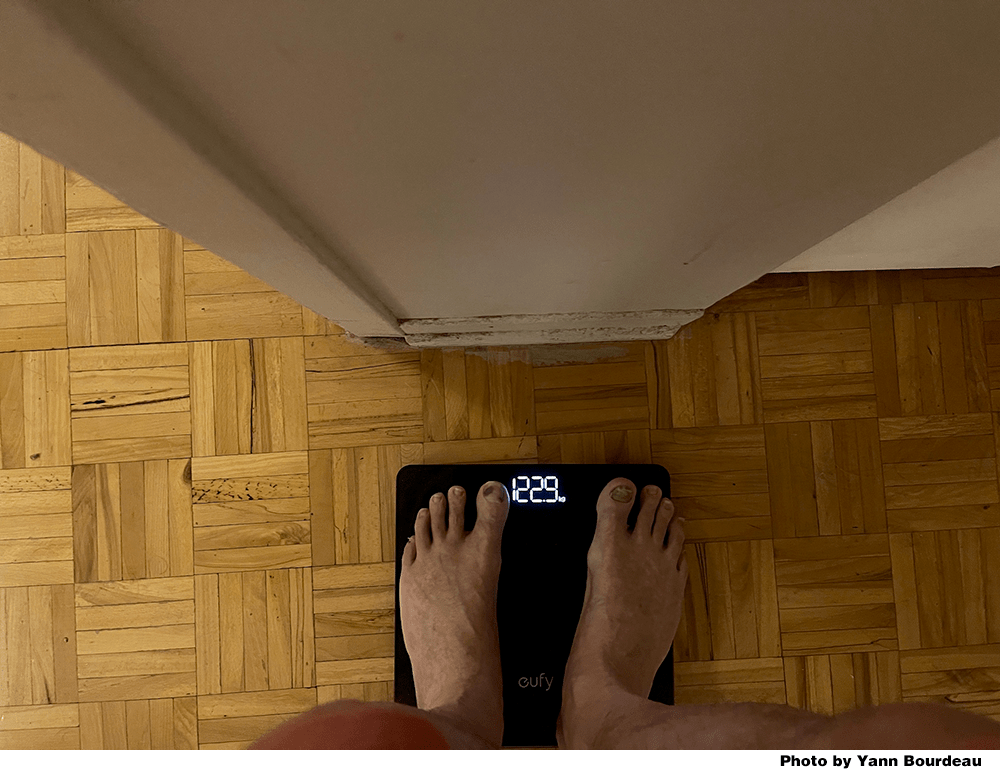 My Quest to Lose Weight: How I Got Thinner by Yann Bourdeau

Below is a picture of me on my sixteenth birthday. Looking back, I continuously gained weight from when I was sixteen. At first it was just small amounts. When I reached twenty-five, I added more pounds each year. I don’t want necessarily to be back to my teenager year size. However, I’m hoping to be at a healthy weight in a year or two. Seeing myself this young and healthy compared to what I became make me wonder where I got so lost.

After some health issues at the end of 2020 and early 2021, I decided to lose weight. I bought myself a scale to know how heavy I was: 347 pounds. If I did not stop gaining weight, then I was on my way to die like Pig Champion (1958-2006) of Poison Idea. For those who don’t know Pig Champion, he was the weight-heaviest guitarist in punk at around 450 pounds. My multimedia software library says that Pig died from an unknown cause. Years ago, I read that he had an untreated kidney infection and the flu at the time of his death. He was in bad health due to his weight and lifelong abuse. Few were surprised that he quit us at forty-seven.

I’m older than he was when he died, so it makes me think about my life expectancy. Sure, I did not consume a copious amount of drugs and alcohol like he did, but I was eating a large amount of fast food, around eight meals a week, including breakfast at McDonald’s. I didn’t care what fast food did to my body. I wasn’t just eating fast food often, I was eating a lot of it, often adding a second burger to a meal. I’ve never been ashamed of myself for having a lot of weight. I’ve been like this for many years of my life and that was the way it was.

In June 2021 my journey for healthier eating began. For the first nine months, I cut back on meal portions. Eat only what is needed, and it was working. I lost around sixty pounds. Around March 2022, it wasn’t working anymore. I didn’t gain weight, but I didn’t lose weight either. In May 2022, I started to take fast walks and in June 2022 I subscribed to an exercise tracking companion app. With the app’s help, I do a ten-minute session of bodybuilding each day. In July, I started to see a dietician for a better and healthier diet. Also in June, I started to use a calorie counter. I began to lose weight again. I have now lost seventy-seven pounds.

I know these healthy habits are to be followed all my life. I don’t want to lose weight and, after a hard part has been done, regaining it back due to a return to my old habits. It’s not fun being overweight and it brings a lot of health issues. For me, these issues occurred when I was in my late thirties and early forties. At thirty-six, I was diagnosed with type 2 diabetes and high blood pressure due to my weight. I have never been on insulin, only drugs to help my body process sugar.

I’m on antipsychotic drugs, which usually make people gain weight. I saw my family doctor last April. He decreased my medication for diabetes and high blood pressure due to my weight loss. I didn’t need the same dosage as when I was 347 pounds. It made my day and I realized I was on the right path for my health and wellbeing.

I’ve been walking twice a day for two months: one walk in the lunch hour and the other one in the evening. I have a fitness watch which estimates my burned calories. It records fewer calories burned lately because I’m getting more in shape than before. I’m no athlete, but I’m in better shape than a year ago. The physical effort when I do exercises is less than when I started. Same thing for my bodybuilding training regimen. At first, I had difficulty completing them. Now, I finish them without being exhausted. I do everything beside the push ups. I do them on my knees.

I find it strange that healthy and natural food costs more than processed food.

The dietician assigns me two goals per month to get healthier. She told me I was not eating enough fiber and protein. I started to make the gradual change to eat healthier. I was almost only eating salads to lose weight before seeing her and I noticed that buying healthy food cost more than eating at McDonald’s. Money is not an issue for me when it comes to food, but it can be for someone on a lower budget than me. I find it strange that healthy and natural food costs more than processed food.

One of my goals is to start cooking meals from recipes. Often, I ate meals that just needed heating, like sausage with vegetables. I varied it with pork chops and small steaks.

Two weeks ago, I noticed I added a hole in my belt to a smaller fit and did not lose enough weight to justify it. I think I’ve started to gain muscle with all the exercises I do. I lose the fat, but I gain in muscle. My body is rebalancing itself, which is a good thing.

I didn’t find it hard to change some of my habits for two reasons: I’m stubborn about my goal and I discovered that I like more healthy foods than fast foods. Fast foods has loads of salt and fat, which at first taste great but when you try healthier options, it is not that good.

Specifically, I now find fast foods not as tasty as healthier food. I now understand why I was eating so much fast food. It’s engineered to be addictive. I still eat fast food in small quantities, usually once per week. At first, I thought doing so would make me happy. I do not enjoy it much anymore.

Also, I like walking around my neighborhood. While walking I listen to music and really enjoy it. I’ve been listening to a lot of Beastie Boys, American Steel, The Cramps, and Amyl And The Sniffers. I usually get back home after twenty-five minutes so I don’t listen to full albums.

Here’s another photo of me at fifty, seventy-seven pounds lighter.

In a year or two, I’d like to reach two hundred pounds. I don’t know if I’ll be able to reach it. I’m now at 270 pounds and I’m a lot healthier than a year ago. However, if a reach a point when I cannot lose weight anymore, it will not be a big deal. At least I’m healthier. I was sleeping around five hours per night and I was always tired. Now I sleep eight hours per night. I have more energy during the day. It’s due to eating healthy, exercising, and the weight lost.

If I reach 200 pounds, I’ll try to maintain my weight by settings my calorie counter software to be neutral (not gain or lose weight). Also, I’ll try to continue my exercise. I know these habits are to be maintained all my life or otherwise I’ll gain weight. While writing this column, I have been challenged as to why I was not going vegan. I thought about it and I’ll try gradually to make vegan recipes. I have been suggested a vegan cookbook which I’ll buy.

I’m also trying to reduce my carbon footprint on earth. Once my car gets too old, I will not buy another. I’ll take public transport. Climate change action is something that I value very much. I know there are ethical and ecological (pollution) issues about eating meats/dairy products. So, if I take steps to reduce my animal product consumption, it also reduces my carbon footprint. It’s also more ethical to not eat another living animal. It is not completely out of the question, but if I change to veganism then I’ll need to rethink how I eat. I’ll think about it but I make no promises.