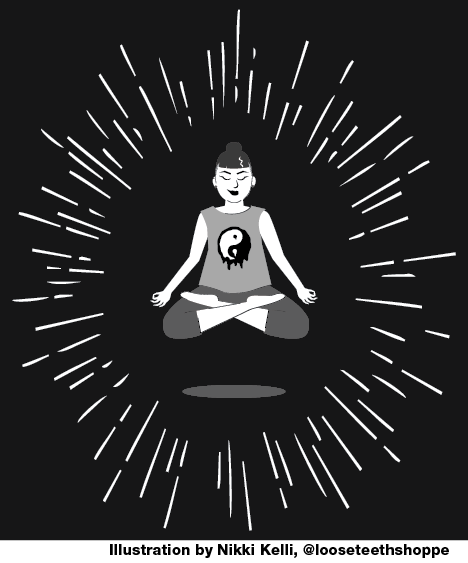 I’m a sucker for self-help tips, as much as I hate to admit that about myself. I’m currently subscribed to a number of health and wellness email lists, and I devour them wholeheartedly each time one lands in my inbox—especially any revolving around mental health and well-being. Sometimes I manage to read through them while simultaneously rolling my eyes so hard I fear they’ll fly off my face. Other times I indulge them in earnest. But either way, I always give them a shot.

In reading many of those articles I’ve found a few common themes to establishing a sense of calm or restoring balance in life: get enough sleep, wake up early and start a consistent morning routine (see my last article for how I feel about that one), practice regular self-care rituals, eat a balanced breakfast every day, reduce screen time so you’re not looking at your phone right before bed or first thing in the morning, pour turmeric on everything you eat, drink plenty of water and, last but not least, make time for meditation.

I’ll admit, I’m doing my best to follow through with almost all of those. I’m trying to become more ritualistic in my day-to-day: I’m drinking water every morning (even if it’s only a few sips), I’m having a cup of turmeric tea every day (and I honestly don’t even hate it that much!), I’m not hitting the snooze button as much (trust me, I still hit it a lot and I’m still constantly in a rush to get ready and out the door), and I spend way more money on face masks than ever before.

But that last tip has always eluded me. For a long while, I rolled my eyes whenever people (namely, rich white people) would mention meditation. It always seemed to me like something only bougie people would do, like openly doing yoga in public spaces and buying name brand clothing at places that aren’t discount stores or flea markets. It appeared to me to be an action well-off people will tell you to do because it’s good for you, acting as if offering a bandaid will stitch up a gaping wound.

This, of course, was an incredibly flippant and ignorant view of what meditation is, shaped largely by the West’s co-opting of it for the moneyed self-help industry. I was harsh to judge something I didn’t fully understand, instead only viewing it through the lens of rich self-help “experts,” and not taking the time to learn more about its thousands-years-old practice in Hindu culture and those who believe in it. All I knew was that it was something I couldn’t make the time to do and therefore it wasn’t for me; as if that’s all that mattered in something so widely practiced every day.

It wasn’t until my husband started meditating to help ease his anxiety that I decided to give it a shot. Watching someone else do it in real time as a part of self-care made it seem more accessible and feasible. It was no longer an abstract idea that self-help books and self-made influential “healers” were tossing out there as a cure-all, but instead something that, if done right, could actually work in tandem with other wellness practices. Something I should have taken more time to respect and notice in regards to other cultures, as opposed to only having my understanding of it be from the very self-help articles I rolled my eyes at before.

What I didn’t realize at the time, and still have a hard time accepting, is that there’s no such thing as doing meditation “right.”

That’s the first rule of meditation: it’s not about a hard and fast practice with set-in-stone ways of doing it that are guaranteed to achieve the same desired results every single time. It’s about owning how you choose to process and think about things. And, honestly, that’s really friggin’ hard to accept. The first time I decided to give meditation an honest go was with my husband. We sat in silence in our living room, eyes closed, following the commands. We both kept our backs straight, our feet firmly planted on the floor and our arms at our sides. I could feel myself fidgeting the entire time, which then led me to feel my husband silently growing annoyed with my inability to just sit still (he wasn’t, but in the thoughts I was focusing on in that moment, he totally was).

And I approached meditation the same way I always have, which is the same reason why I never kept up with it: I sat in silence, trying to ignore anything and become a blank slate. I tried to turn off my hyperactive brain. I tried to achieve a true sense of calm. It didn’t work. It never works. I’m just no good at meditating. But trying it with my husband, despite my belief that I was doing it all wrong, made me at least willing to give it another go. It would be months before I ever went for it again, but it no longer was something I’d avoid at all costs or roll my eyes at.

Now, a few months later since my last attempt, I was fortunate enough to land a free year subscription to a meditation app that’s become a part of my routine. I’ve also previously mentioned using technology as way to dip my toes into therapy—I’ve been finding that those apps I’ve dismissed in the past are more useful than I realized. Sure, it may not be helping with reducing screen time, but having little reminders of wellness practices certainly doesn’t hurt.

And the end result? I’m okay. I’m feeling okay and okay is… well, okay. Has meditating made me all “better”? Of course not, but I’m okay with understanding that that’s not what it’s about. But it has made me more aware. Every day I take somewhere between five to fifteen minutes to go for a walk outside (another routine I’ve added!), and just sit and… be. I’ve learned that my prior approach had a major flaw in it: it’s not about the absence of thought and forcing my mind to be a blank slate; it’s about allowing thoughts to come and go as they please, with breaks to focus on my body and the elements around me. And sure, even that’s not easy. When I focus on my breathing, I start to hyper-focus on it, forcing me to breathe in a way that’s not natural, and it clouds my mind with all the things that must be wrong with me since I’m not breathing correctly.

Then I become aware that I’m trapping myself into that type of thinking again. I become aware of the thoughts I’m letting cloud my mind and I let them come and go as they please. I don’t try to dismiss them or force my brain to think about something else, I just let them do what they have to do, knowing that, they too, will pass. Meditation has also taught me that I might not feel that different or even “get it’ for a while, and I’m aware that that’s fine too. But those few moments of stillness, of awareness, are a much-needed way to hit the reset button mid-day. And taking the time out to do this every day, even if I don’t want to or think I have the time to, makes me realize how there are always times for the little things that help us, we just need to make them happen.

So what have I learned since I’ve been meditating? Fresh air (even in the cold winter months) and a little exercise is therapeutic. Thoughts can only be controlled so much, but sometimes it’s about letting go of control and letting things run their course. Accept that some things aren’t meant to be right or wrong, but doing them with regularity can be enough to establish some sense of balance. And, most importantly, if you’re going to close your eyes in a public park, survey your surroundings carefully. A raccoon appearing next to you in the daytime likely has rabies and will chase you for at least a block unless you can turn a corner fast enough.

You know what, maybe just meditate in your car instead, just to be safe.