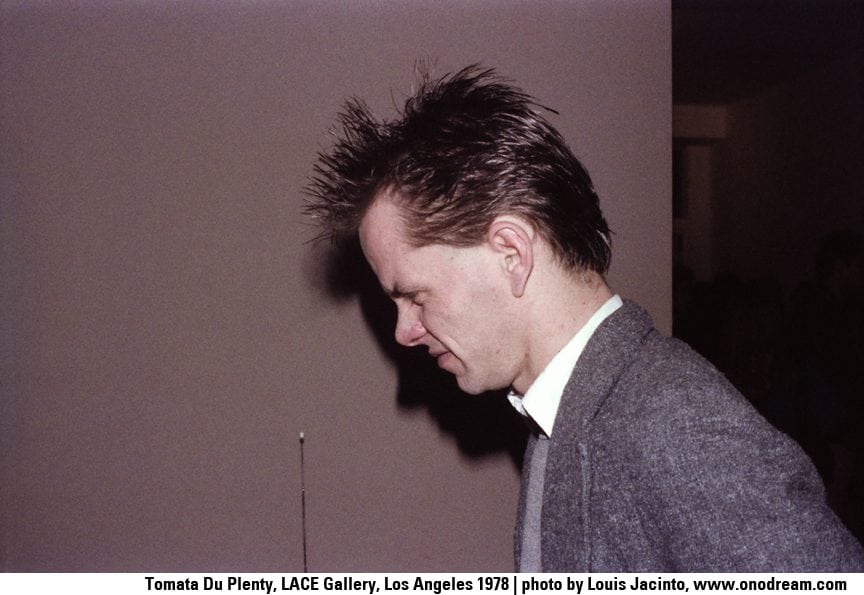 In the spring of 1978 there was a big art show, DREVA/GRONK. Despite not too much publicity, more than 1,500 people showed up.

I went to see my friend Gronk’s work along with The Bags, who were also playing at the opening.

By this time Gronk and the other Asco artists had begun to invite punk bands to play at their art openings. The Asco art openings were a great and necessary bridge for punk bands to play. The Masque had already shut down, and this was before other venues such as the Whisky A Go Go, Madame Wong’s and the Hong Kong Café took off booking punk bands.

The Screamers, led by front man Tomata du Plenty, was in attendance and I took this quick shot of him; one of the rare times I was using color film.

I always kept my distance from the local punk bands. To me, they were big stars and I was just a kid with a camera. But that night, I mustered up the nerve to talk to Tomata. I told him I had lots of shots of The Screamers in performance and he said he preferred those types of shots rather than being posed.

As the show ended, I saw he was just hanging back so I asked him if he needed a ride. He said yes and I dropped him off in front of his apartment. I was so thrilled to be able to spend this short time with him as The Screamers were one of my favorite bands!