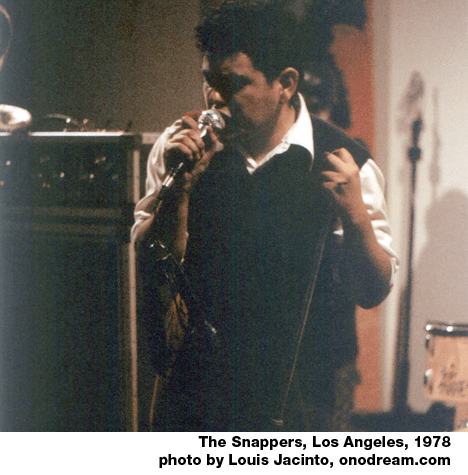 The great bridge for punk bands to perform in the 1970s was the art collective Asco. Asco consisted of Gronk, Patssi Valdez, Willie Herrón, and Harry Gamboa, Jr. During a crucial period in Los Angeles when the Masque was shut down by the fire department and the established venues were still not booking punk bands, Asco would invite bands to play at their art openings. At the 1978 Asco show GRONKPATSSIPARTY in LACE Gallery downtown The Snappers—Gerardo Velasquez, Mike Ochoa, Robert Becerra, and drummer Jessie—performed.

The concert began with general signs of confusion within the band. The drummer Jessie, who needed no electricity, mouthed incomprehensible screams as the rest or the band fiddled with their cords for power. The music started, drums lagging a fraction of a beat behind. Then an unidentified person mercifully pulled the cord which supplied all the electricity. More ugly faces and screams were exchanged across the brick stage.

When the power returned, the band began once more, this time in beat. However, before the first song was over, the microphone went dead. Mike, the lead singer, continued to sing in spite of the technical difficulty. The second song dragged on and on without vocals; the electric bass sitting on the synthesizer gradually turned to noise. At this point the frustration—or alcohol consumed by the band—flooded their heads. Gerardo, playing the synthesizer, left the stage. Guitarist Robert kicked a hole in one of his speakers. Drummer Jessie toppled over his drums. The Host, Gronk, did not suspect the Snappers had encountered difficulties since the band Airway had made similar noises during the prior set.

The GRONKPATSSIPARTY concert was only the second for the Snappers, and also their last.