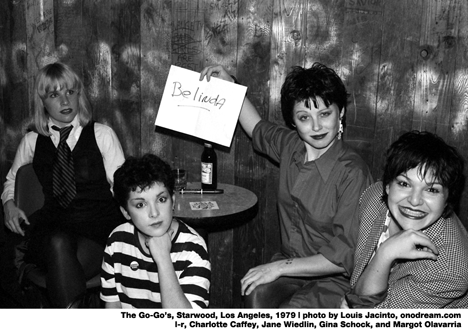 The Edge of Pop

The band emerged from the initial punk music scene alongside some of the most influential punk bands out of Los Angeles—The Bags, The Screamers, Nervous Gender, X, The Germs, among others. But by the end of 1979, and still punk, changes were already in the making. Original drummer Elissa Bello was replaced by Gina Schock and in the prior year Charlotte Caffey was added to the original four-member line-up: Elissa Bello, Margot Olavarria, Jane Wiedlin, Belinda Carlisle.

At the end of 1980 Olavarria was replaced by Kathy Valentine and the rest is pop history.

Catch the new documentary about the band and you’ll see that the Go-Go’s were a punk band, my friends.