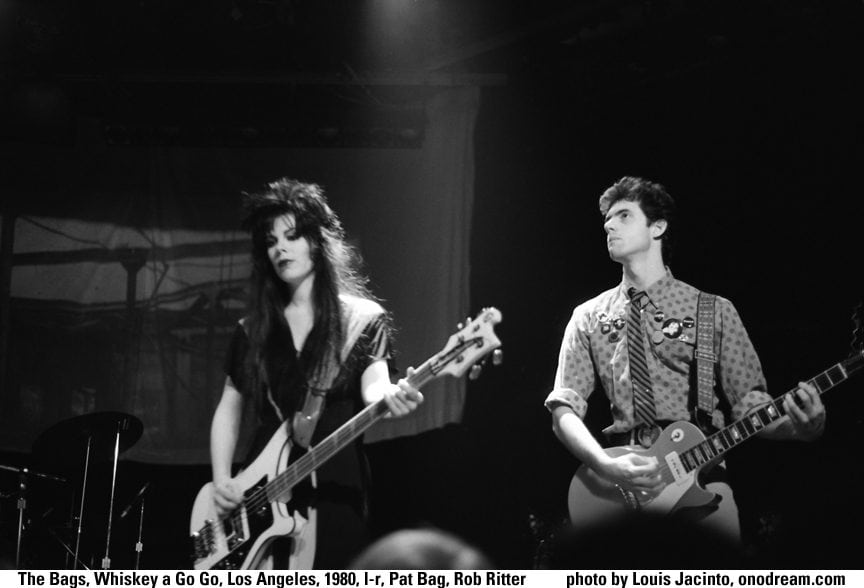 Punk did change the world forever. But back then, I always thought that my favorite bands, especially The Bags, would continue and flourish. But, of course, that was not to be. Like all of us, the bands moved on and their members spread out in different directions. This was the last time I photographed The Bags, in very early 1980. Soon after, Pat Bag left the band and by the end of the year the rest of the members disbanded and were no more.

But their influence continued, especially Pat and Rob Ritter. Pat joined The Gun Club, The Sisters Of Mercy, and then The Damned, one of the original British punk bands and the one that was often credited with sparking the L.A. scene. Rob also joined The Gun Club and appeared on their first LP Fire of Love, but left, changing his name to Rob Graves. He formed seminal death rock band 45 Grave, with Dinah Cancer, Don Bolles (previously of the Germs and Nervous Gender), Paul Roessler (The Screamers and Nervous Gender) and Paul Cutler. 45 Grave was influential in the creation of goth rock. Each member of a band is important because, down the line, their continued artistry continues to flourish and influence.

///
If you enjoy and value what you see, read, and hear on razorcake.org, please consider a tax-deductible donation for our continued survival.