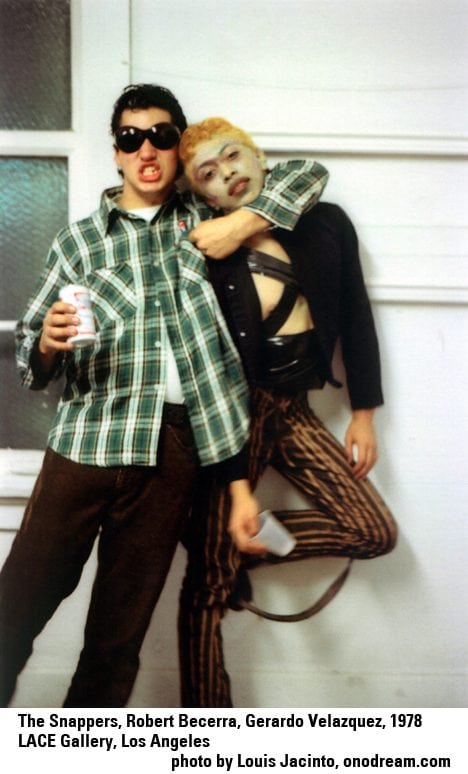 My college chums Gerardo Velazquez and Michael Ochoa had formed a band called The Snappers, along with Robert Becerra and Jessie. Gerardo billed himself as Odious Jerry and Michael was Vociferous Mikeee.

Again I wish to point out that during the period between the closing of the only punk venue in Los Angeles, The Masque, and before the established rock venues like The Starwood and The Whisky a Go Go—as well as the nightclubs in Chinatown began to book punk bands—there was no place for the groups to play.

But a bridge was built by the artist collective Asco when they began to have punk bands play at their art openings. This is an often overlooked aspect of Los Angeles punk history.

So I went to see The Snappers who were booked to play at GRONKPATSSIPARTY, an art show and Halloween party hosted by Asco co-founders Gronk and Patssi Valdez. It was a wild party and punk show also featuring the bands Airway, Non, and Monitor.

Everyone was there—the Asco art fans, the punks, and everyone else in between who had heard of the fantastic art and punk shows that Asco had been hosting.

This show was The Snappers second performance, and it turned out to be their last. The performance was troubled with equipment malfunctions and a high level of alcohol consumption. Later Robert would move on and form The Stains, and Gerardo and Michael, who met Edward Stapleton that night, would form Nervous Gender. And like it has been said many times over, the rest is history. Glorious punk history!