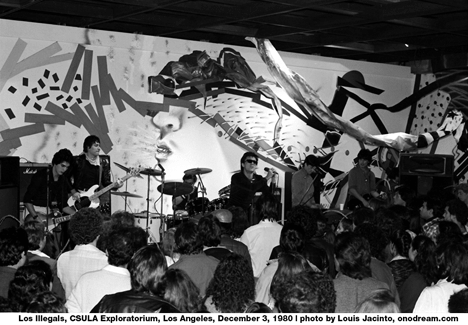 I remember when punk first started in Los Angeles the two major rock clubs in town—The Starwood and the Whisky A Go Go—would not book punk bands at all.

So punk bands would perform at any venue made available to them, and the kids would pack the place. Some of those places were, initially, The Masque—a basement off of Hollywood Boulevard—and when that venue was shut down by the fire department, art openings by ASCO, an art collective consisting of Patssi Valdez, Gronk, Harry Gamboa Jr., and Willie Herrón. And those art openings— featuring performances by The Bags, The Last, The Snappers—among others, would be jammed packed!

Willie Herrón was a founding member of Los Illegals—and they were one of the few Los Angeles punk bands to be signed to a major label—in this case, A & M Records. Their first album, Internal Exile, was a success but as they were preparing to release their second album, A & M was sold and, as is the case, many acts were cut from the roster, including Los Illegals.

This image is from December 3, 1980. Herrón and his ASCO compatriot, Gronk, had an art exhibit at Cal State L.A. which included a performance by Los Illegals just before being signed to their recording contract. The show included the paper mural created by Herron, and as you can see, the place was packed. This performance was the last photograph I took of the initial punk scene. Five days later John Lennon was murdered and I packed it in after that, moving on.