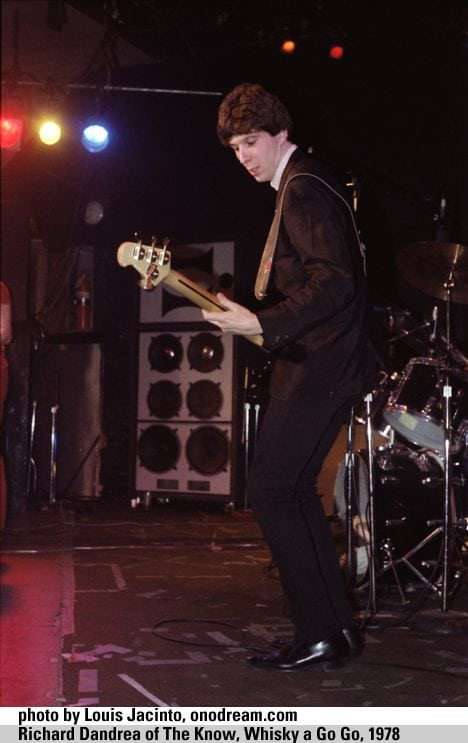 A long time ago, back in 1976, I went to see Richard Dandrea, my then boyfriend’s best friend from college. There was a music festival at Los Angeles’s Griffith Park and the band that Richard played bass in, The Motels, was playing that day. At this time, The Motels’ sound was very raw and rough, playing and singing with a different sound than what was on the radio. And they looked very different than the bands you would see on The Midnight Special! I loved it, and, looking back, it was a harbinger of what was on the way.

Yes, The Motels were that. But after a couple of more years without getting signed, their lead singer fired everyone in the band, hired all new musicians, and toned down their sound. Of course, they got a major label contract after that and had one hit.

After being let go by The Motels, Richard joined The Know, a power pop trio led by Gary Valentine, an original member of Blondie. Yes, none of these bands were punk, but they also weren’t Electric Light Orchestra, Eagles, Fleetwood Mac, Steve Miller Band, or any of the other top ten pop acts from the ‘70s. Bands like The Know were the outcome of the blast that punk created and continues to influence today. I haven’t seen Richard in over twenty-five years now. I hope he’s well, and I thank him and all of the musicians who took rock into a new direction with the help of that punk explosion!