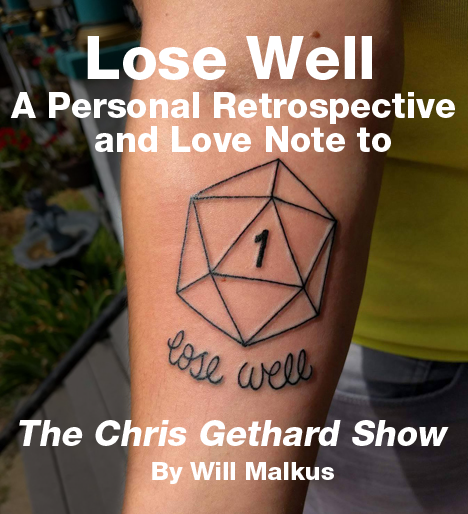 Lose Well: A Personal Retrospective and Love Note to The Chris Gethard Show By Will Malkus

Lose Well: A Personal Retrospective and Love Note to The Chris Gethard Show
By Will Malkus

Noted alternative comedian Chris Gethard once threatened to drive to my house and fight me on public access TV, but there’s a lot of history to cover before we get to that story.

The very first time I encountered Chris, it was back in 2014 through an article he wrote called “Overcome Your Programming and Be a Better Man,” in response to the Elliot Rodger shootings at UC Santa Barbara, beseeching all men to take a long, hard look at themselves and take responsibility for their own actions. It resonated heavily with me as a recent college graduate and, even more recently, as a guy in therapy for the first time who was realizing what a shitbag he had been for most of his life.

I remembered his article when I saw his name a few months later on the now-deceased streaming video site Blip.tv, which used to host The Chris Gethard Show when it was on Manhattan public access. I gave it a shot and tried watching the latest episode, called “I’m Nervous All the Time,” which fans will recognize immediately as it lives on in beloved infamy. The episode opens with a fifteen-minute long uninterrupted chant of “EAT MORE BUTTS” and features a person in a unicorn mask fellating a patriotic dildo, crew and audience members surrounding Gethard as he slides lower and lower in his seat, and an entirely improvised accompaniment by musical guest Jeff Rosenstock and his full band. For whatever reason, at the time this did not resonate with me. I clicked away. Now it’s one of my favorite episodes.

But the first time I watched an episode and realized this show was something that I needed in my life came about a year after that. In the summer of 2015, I was doing a two-week program at Trinity College in Dublin. I was also slowly self-destructing. I’d signed up for this program mostly because I desperately needed to not be at home. Because my depression and anxiety were both at all-time highs, I spent most of my time going between my room and class and nowhere else. I had this amazing opportunity in an amazing city and I couldn’t bring myself to do anything with it. My mental health at that point was an ongoing saga; a long relationship had just ended and I shut down completely as a result. I felt numb, but also indestructible. You can’t hurt if you can’t feel anything, right? It was like I had nothing to prove, but also nothing to fear. I was both convinced and content that I would feel this way for the rest of my life.

This time, I stumbled upon the show because The Front Bottoms were the musical guest and I had been on a huge tear listening to their new album. I watched the whole episode and then immediately started another. And another. I watched ten episodes that first night, enough to take the core DIY ethos of the show to heart. The next day was pretty similar; I went to class, I went back to the dorm, and I binged more episodes of The Chris Gethard Show until I fell asleep. I started to internalize everything Chris was saying on the show, about how it’s okay to be sad and scared, but everyone has something inside worth putting out into the world and it’s okay if you try and fuck up.

The next day in Dublin, I got up and went to class like usual, but that night I went out with the other people in my program. Over the next week and a half, I drank in bars all over Dublin, sang karaoke for the first time, and said yes to every new opportunity that came my way. When I got back home to Baltimore, Md., I spent months watching every episode of The Chris Gethard Show I could find, but only when I wasn’t rediscovering my love for punk shows or writing for the first time in years.

I wasn’t numb anymore, so the depression and the anxiety came rushing back just as strong as before, but I was determined to deal with it instead of just shoving it to the back of my mind. The joy I felt as part of the crowd at a show was worth the anxiety it caused, and the sense of relief at expressing myself again was worth the fear of failure. As I told both Chris and Jon Hamm when I called into the wrestling-themed finale of the show’s second season on the Fusion network: I used to want to be fearless, but I eventually realized that never being afraid of anything is insane. Chris Gethard taught me that it’s better to be brave instead.

That’s not the end of my personal history with The Chris Gethard Show, but those are the most intense moments. If you haven’t seen the show before, it’s a talk show very loosely in the style of late night where Chris acts as host, along with a panel of other regular characters, and a celebrity guest. Conversations about the theme of the episode are regularly interrupted by outbursts from the audience, bits from guest comedians, and performances from musical guests. It ran for 155 episodes on the public access Manhattan Neighborhood Network, two seasons on the Fusion network, and finally one glorious season on truTV before it was ultimately cancelled just a few short weeks ago. In his Facebook post send-off where he announced the cancellation, Chris asserted that it was very much a mutual decision made by both the truTV executives and himself, because the end of the last season very much made it seem like he was done with the project. Chris told them that they were right. This was hard to read, but not as hard as I expected it to be.

Am I going to miss the show? I don’t know, to be honest. I will always have fond memories of it and I loved watching the new episodes, but if I’m being completely open, it wasn’t the same. It wasn’t that the show changed, that the quality was diminished, or the content was safer or anything like that. It’s hard to pinpoint, but maybe it was that I changed. Maybe it wasn’t for me anymore. Maybe now, instead of being the reason I was strong enough to get up in the morning and get through my day without wanting to die, it was just a TV show that I really, really, really liked.

I was a mess when I first found the show and I had so many good things come about through it. To say that what I learned from Chris and the rest of the cast changed my life would be an understatement, but that’s the thing. I changed. I ran into the girl I’d had a crush on in high school at a punk show and only had the guts to ask her out because I wanted to be brave. We’ve been going strong for over two years. I got my dream job because in my interview I wasn’t afraid to speak to my mind. The person I was when I found The Chris Gethard Show desperately needed it, but I’m not that person anymore. Good art should make you feel something. Maybe great art teaches you how to feel okay.

A part of me wishes that I could write about the show more objectively, but I have so many strong thoughts and feelings tied up in it that it wouldn’t feel right to place it in a vacuum. I’m not trying to overstate the importance of a TV show, or the guy who created it, but I found it at exactly the right time in my life. I will never be done with it, but if the cast and crew are ready to move on then I have to thank them for helping me reach a place where I can, too. So much of who I am and what I do now came about because I had the courage to try, and I think that’s the true legacy of The Chris Gethard Show. There’s an entire community of people that sprung up because they connected with its message who are making or are going to make art of all kinds, and when someone asks them one day why they started, they will say it’s because Chris Gethard told them it was worth taking a risk. There’s a reason why so many people have gotten the show’s motto of “lose well” tattooed on their bodies.

When I called into the Sandwich Night livestream of The Chris Gethard Show one too many times, Chris turned to the camera and yelled that if I called one more time he would drive to my house and fight me. He did stand-up in Baltimore just a few months after that and I introduced myself afterwards. I said that if he still felt like he needed to, we could go out behind the venue and throw down. He looked very sheepish and said he would really rather not do that. Instead we hugged, and he has hugged me every time I’ve seen him since. This is kind of an anticlimax, but so was the ending of the show just shy of its ten-year anniversary. That’s life.

To quote Chris himself, it’s time to see what’s next.

Will Malkus is a writer, librarian, and concert photographer based out of Baltimore, Md. You can check out his photography portfolio at charmcorephoto.com