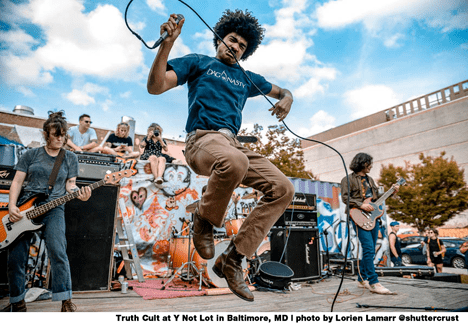 I met the singer from Truth Cult because of a Gouge Away patch. When I asked about the patch because it’s not that common in Baltimore, he told me “Oh, my band tours with them sometimes.” I probably looked bug-eyed, excitedly asking “WAIT. WHO IS YOUR BAND?!” I made an immediate mental note to catch them as soon as possible, which turned out to be a free show with Turnstile at the Y Not Lot, an empty lot in Station North (Baltimore, Md.).

A lot of people might say that they were “blown away” by their first impression of Truth Cult’s performance, but more specifically I was kicked in the head by it, quite literally. By the end of the set, the vocalist was bleeding. I’m tempted to say this band is a danger to themselves and others, but in a satisfying way that I don’t want them to stop or even slow down.

The punk band has a harder sound that fits in well with the DC hardcore scene, but additionally offers something melodic and almost spooky. I think it’s in the interplay between the main shouted vocals and Emily’s vocals. There’s a speed and urgency to the percussion and guitar that feel aggressive. It’s a rush—an eerie rush that I can’t wait to hear more of.