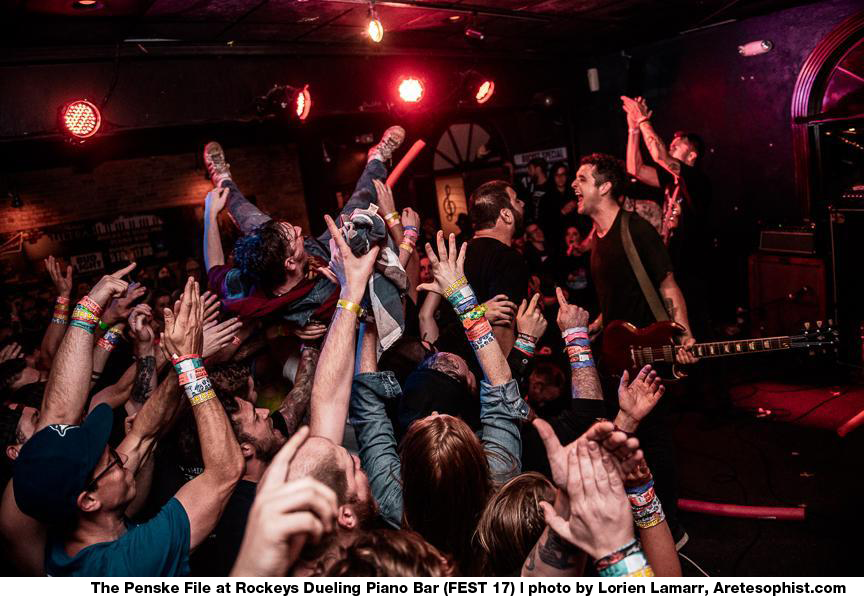 Just before Pouzza last year, The Penske File (Burlington, Ontario) dropped one of the best punk records of 2018, Salvation. I loved this record from the first listen. The sound is energetic, warm, and upbeat. “Kamikaze Kids” practically bounces the record open. The melodies aren’t just catchy, they are inviting. There’s a good-natured almost folkiness to it somehow, too, and not just because there’s a harmonica sometimes on tracks like “American Basements”—although admittedly that helps. While the sound drew me in initially, the lyrics keep me coming back for more. The Penske File have narrative, storytelling qualities to their songs and don’t stray away from heavier topics—but the tone still comes across hopeful and earnest. I’m particularly a fan of the metaphor in “Young & Worthless”: “I’m just a speck of sand in a master plan that doesn’t exist,” which, incidentally, I think is also likely the best scream recorded in 2018.

I was thrilled to shoot them at Pouzza and shocked when I got to Katacombs and there was a line. No one had a line. I barely got in. I hadn’t counted on everyone being as excited to see the new record performed as I was. I was additionally shocked but pleasantly surprised that the vocal heavy hitter is actually Alex, the drummer. To be fair, they are all talented vocalists and share in the vocal work, but it’s not common to see that from a drummer. Frankly, I’m impressed. Feeding off their energy, the crowd was impressed as well and boisterous, almost silly. At one point a crowd surfer dove off the side stage during a song break—to no music.

When I examined my shots later though, somehow it didn’t capture that. You couldn’t see in the photos what I’d felt in that experience. I made it my mission to figure out how to make that energy translate to a still image. I wanted to be able to show how the music made me and everyone feel. I shot The Penske File five times in 2018. Five. It had become an impossible quest. They became my white whale in the Moby Dick of my year, representing my limitations to control and capture something wild. When I found out they were closing out FEST 17 as the final set, I knew that had to be the time, if ever there was one, to get that shot.

At Rockeys Dueling Piano Bar, early Monday morning, the mood was cathartic and attendees responded with raucous abandon. The crowd couldn’t contain its surfers who bumped into each other. Beers went flying through the air as often as pool noodles. To say I overshot that set would be an understatement. Choosing just one photo for this column was agonizing, especially considering the pressure I’ve put on it to convey the level of energy in that room, but I like to think I accomplished it.