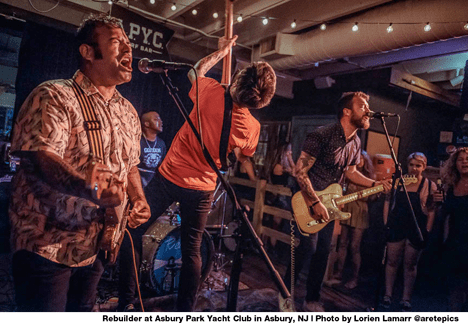 “Anything’s better than New Jersey!” Personally, I have no strong feelings about New Jersey, positive or negative, but I am magnetically drawn to songs about leaving places. It’s a pop punk standard sentiment, leaving your hometown, except that Rebuilder aren’t from New Jersey. They are from Boston, Mass. So, throwing shade at New Jersey in La Grand Fromage is about as misplaced as Sal’s unpredictable and baseless hate for Streetlight Manifesto. Still, there’s a daring and sardonic appeal to smearing the reputation of the place you are currently in directly to its own residents.

Speaking of bold moves, based on how they move on stage, particularly Daniel, I suspect the band must wear helmets when they practice. If they don’t maybe they should. I can’t tell if their energetic stage performance is an inevitable collision they have magically avoided or a well-rehearsed ballet. Either way, it’s entertaining and sort of wild, but earnest. That’s an accurate description of the sound as well, so accidental or not, it’s genuine.