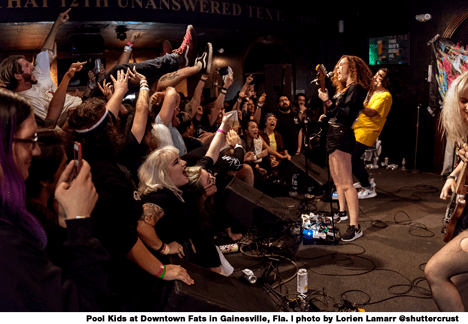 Every year at FEST there’s a band that I’d never heard of who blows me away. This year it’s Pool Kids. I’d just finished shooting a Skatune Network set that looked more like a riot than music and I was trying to decide which of the four venues I was covering to shoot next. I thought I’ll get five to ten shots of whoever Pool Kids is and then maybe I could catch a few shots of Brendan Kelly or Assholeparade in the same timeslot. I knew as soon as they started playing, however, that I was very, very wrong. I wasn’t going anywhere.

The sound was hard and raw with breathy and throaty vocals, which is usually enough of a dichotomy on its own to draw my attention, but then there were twinkly noodley guitars and a billion time signature changes and I died. Okay, maybe not quite, but I stood transfixed watching Christine Goodwyne shred.

I listened to Music To Practice Safe Sex To on the flight home and they definitely are a bit harder live than recorded, but that also meant I could follow the lyrics better recorded, which are confessional and complicated. I laughed to myself when I got to the lyric, “I’ve never felt more pretentious in the best and the worst way than when you and i were six shots deep into bottom shelf whisky watching audiotree of this town needs guns” because I hadn’t been able to put my finger on who Pool Kids reminded me of. Although I knew it was a mathy band that I liked. To say Pool Kids are self aware would be an understatement. I both love and hate how pretentious they’ve made me feel writing this review, watching their audiotree, drinking kombucha. Thanks for that… I think....