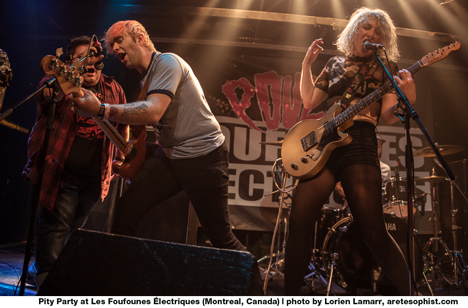 I first heard Pity Party on a Spotify Fest playlist (unofficial: playlists are compiled by enthusiasts). I like to put these playlists of all the artists playing fest on random while I work. Whenever I hear something I like, I make a note of it to try to catch them live. All I knew about Pity Party when I walked into their set at Loosey’s for FEST 17 was that “Suicide Handbook” was a banger at they were from the Bay Area (I have a soft spot for the East Bay). I was not prepared for the energetic, raw, but somehow also polished performance. Honestly, I am mad at myself for not getting better shots that set, but walking into Les Foufounes Electriques six months later I was more prepared than a Boy Scout. I wasn’t going to get caught unaware twice.

Pity Party bills themselves as “emo pop punk” or “bummer punk.” I find the sound heavier than any pop pop punk but too uplifting and catchy to be an effective bummer, let alone emo. I like the description of “bummer punk” though, because it sets ups anyone new to the band to be exactly as unprepared for the tight, hooky, animated performance of high-powered pep in their live show that I experienced. I want them to catch you off guard, I guess. If you’d rather spoil the surprise, the Grindmother video will give you an accurate sample of what you can expect from them live. It’s got more moxie than you should reasonably be able to fit into under two minutes.