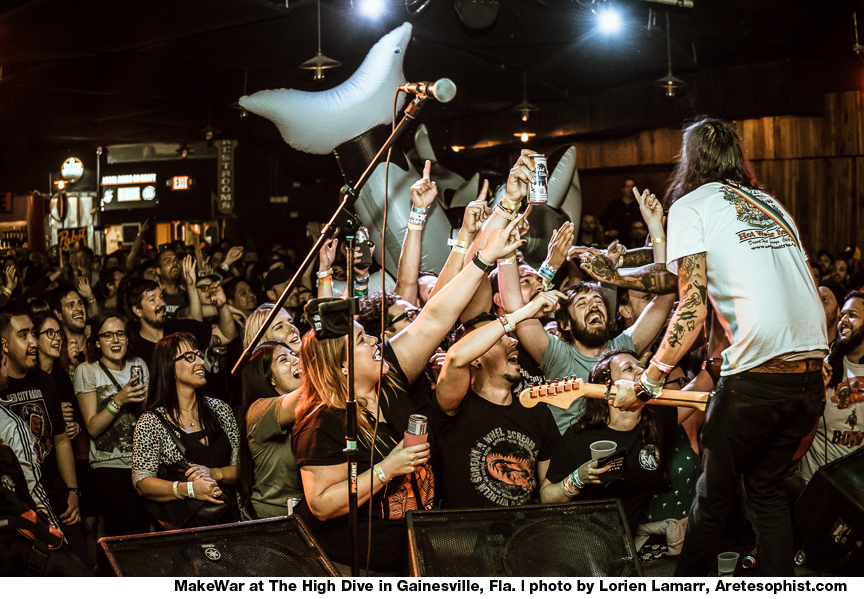 Admittedly, I was late to the party on MakeWar (NYC). I first found them on a flight home from Fest 16. I had been recommended them by a few friends and by the end of “Matador Pool Party,” the first track on Developing a Theory of Integrity (released 2016), I was already kicking myself for missing their set. MakeWar has everything that draws me to a band and does it with flawless cohesion: gorgeous, flowing melodies; lyrical storytelling; and booming anthemic gang vocals that practically beg you to sing along. I had to fight myself not to belt out loud, “Let me have a normal five AM!” from “Ode,” the second track, on a packed flight. “Tiger Lili” had me resisting air drumming on my tray table. I was hooked.

I made a decision on that flight; I was going to photograph them in the following year. I tried repeatedly within the next year to get that opportunity, even bargaining for a photo pass to their gig opening for The Gaslight Anthem. I only got notice that I could shoot the show a few hours before doors, but the show was in Brooklyn, NY and I live in Baltimore, Md. Dejected, I resigned myself that my next opportunity would be at Fest 17 and I couldn’t be more pleased that this ended up being the set I shot.

The first thing I noticed when they started playing (besides the ruckus of a mosh pit behind me) was the giant inflatable orcas on stage. An inflatable orca is also on their album cover. I thought to myself, “Those are going into the crowd and soon. I am in the wrong spot.” At the end of the first song I darted side stage so I could get behind the band.

“I want to see someone ride one of these whales!” Jose Prieto, the lead singer, shouted as he and Edwin Santacruz, the bassist, hurled the inflated whales and one inflated skeleton into the crowd. To say the crowd went wild would be an understatement. This was the sort of cathartic pandemonium that the Fest crowds live for. In short, if that kind of raw energy is what you’re looking for, I assure you, MakeWar will not disappoint.