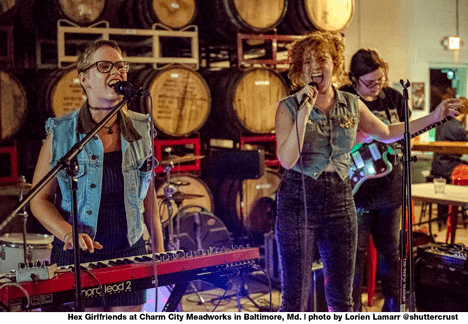 I was searching for W.I.T.C.H. (Women’s International Terrorist Conspiracy from Hell) groups in Baltimore when I found Hex Girlfriends. Their instagram was full of feminist memes so I thought “close enough.” When I realized they were a post-punk band, or self-identified “femmesynthpunk,” I knew I had to see them live. I caught up with them in August at the Meadworks where they played a suicide prevention benefit that included circus arts performances and a kombucha tasting. This was their first performance with a drummer and while I enjoyed the tracks from Call Your Mom, the stand out for me was a cover of Brittney Spears’s “Toxic.” Given their usual topics, it felt oddly appropriate, a little edgier, more real but somehow still fun. The disco ball helped.