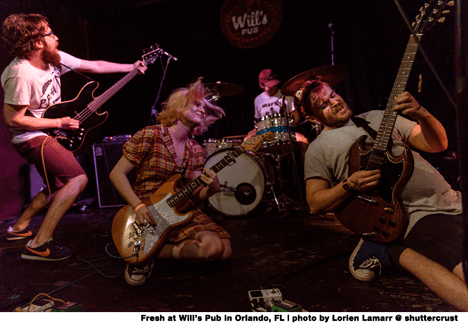 I like to hit up Foreign Dissent in Orlando before heading to The Fest because it gives me a chance to see many of the bands who’ve traveled the farthest. Also, once Fest starts, it’s a bit of a blur for me, so this is my opportunity to spend some real time listening to these bands without concentrating as much on shooting them.

I hear the lyrics “I am valued. I am loved.” And I think to myself, that’s right up my alley; really positive and self affirming. Then she continued with, “I will get revenge on everyone who’s done me wrong.” A smile crept across my face that I couldn’t control.

Fresh (London, U.K.) writes pop punk with emo-styled confessional lyrics accented by angry snarls and melodic gang vocals with some indie pop influence mixed in. It’s bright. It’s energetic. It’s raw. It’s fresh. The band’s performance is a joyous collection of jumps and general goofballery. I couldn’t help but dance and sing along that I, too, “just want to be acknowledged.”

It was about the point that I didn’t think I could immediately love a band more when during a song break, Kat addressed the audience. She was preparing to play the first song she wrote and she wanted us to know how hard it was to do because there are so many barriers that stop you before you even start. “There’s no such thing as elite art, especially if a cis man is making it,” she said and that was it for me. Lifetime fan right here.