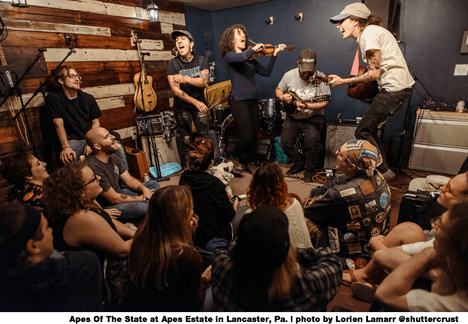 “I got sober intentions ’cause I’m always fucking sober.” When I first met April (guitar, vocals) I thought, “So this is what happens when someone like me finds a guitar when they get clean instead of a camera.” There’s something magical about finding a thing—whatever that thing is—that makes you happy and doing it… intentionally and with purpose. It’s something even non-addicts struggle with and so even though there are a lot of recovery themes in Apes Of The State songs, there’s a universal appeal. In fact, in late capitalism, there’s something utterly rebellious about doing something passionately just because it makes you happy.

Apes Of The State have built a community out of like-minded rebels, inviting local and touring bands to play in their carriage house (like a punk basement, but in the sky). April also founded Second Chance to Play, a nonprofit that puts instruments in rehabs. This set I photographed was a dry set, at the request of the band, for the benefit and to respect the audience members newly in recovery. The remainder of the show was choose-your-own-adventure with regards to alcohol and beverage options. The group are vocal fans of seltzer and have assembled a Facebook group to Defend Seltzer as their beverage of choice.

Musically, the folk punk band is energetic but also pretty, melodic but also edgy—the sort of band that somehow makes a violin and mandolin rock. Lyrically, the songs are confessional and cleverly observant. In “Bill Collectors Theme Song,” Apes Of The State covers everything from the disillusionment of college “where we’ll sell you dreams then make you work for free,” to the opioid crisis “and being a junkie didn’t live up to the hype,” to crippling debt “and we’ll never owe shit to anyone else.” It’s an anthem for a generation of nineties kids.

Apes Of The State has a new record, Pipe Dream, out Nov. 16th with a teaser lyrics video for “Internet song” already available. You can also pet Pebbles the dog—who you can see front and center in the photograph—with the digital pre-order, which I highly recommend. No folk punk album is complete without petting a dog.