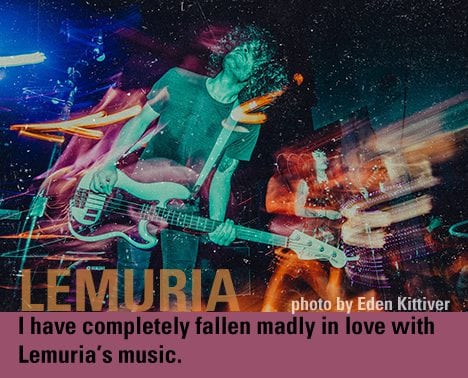 With the world falling apart just a few weeks into the new year, I decided to forget about life for a moment when I went to see Lemuria (Buffalo, N.Y.) at The Echo in Echo Park, Calif. on January 27.

As I approached the venue on this brisk evening in Los Angeles, I ran into a few familiar faces, which was unexpected but also quite nice because it made the night even more special.

I have completely fallen madly in love with Lemuria’s music. In the months leading up to this show, I was excited to learn that they would be celebrating the tenth anniversary of their debut album Get Better and would be playing the record in its entirety.

This album is a collection of pure and genuine emotions that anyone can relate to. It has also been the soundtrack to many adventures I have been on, so there are a lot of warm and fuzzy feelings linked to this record, as with most of Lemuria’s songs. The trio made up of Sheena Ozzella (vocals, guitar), Alex Kerns (drums, vocals), and Max Gregor (bass) has created a unique sound with simple lyrics and gorgeous instrumentals. At times, Lemuria is somewhat reminiscent of The Weakerthans.

They started their set with the first track, “Pants,” which is one of their catchiest tunes and everyone seemed to be singing along. With the help of Tony Flaminio on keyboard and guitar, Lemuria unleashed a powerful set of songs that delighted everyone in that tiny, dark room. At times, the band was so into what they were doing on stage that it seemed that they were the only ones in the room; playing for each other. That wasn’t a bad thing either because it created this strange form of intimacy, like peering into someone’s inner thoughts. At one point, Gregor moved around the stage with his eyes closed and long locks of hair bouncing around as he played bass completely in his own world while never missing a chord.

As the set progressed, Lemuria played “A Lengths Away,” a song that I’ve wanted to see live since I first heard it. With lyrics like, “I’m miserable with you/ I’m more miserable without you and I spend more time missing you than kissing you,” it describes the struggles of some kind of distance that is perhaps all too familiar in the life of a sad girl like myself.

Lemuria ended their set with a few other tracks that were not on Get Better, including “Hours” off of their The First Collections: 2005-2006 record. As I tried to enjoy that song, a drunk guy screamed the lyrics in my ear.

Joining Lemuria on this tour was Cayetana (Philadelphia, Pa.) and Mikey Erg!.

Cayetana played a fantastic set of songs that were reminiscent of the Worriers. I did not do a great job at remembering the song titles but I highly recommend checking Cayetana out on bandcamp.

Mikey Erg! also shined with his solo electric set of songs that spanned the entirety of his discography. Alone on stage with just an electric guitar, Mikey Erg! ripped through newer tracks such as “An Abundance of Julies” and “Boys & Girls & Tentative Decisions” off his latest release Tentative Decisions.

In the end, this lineup and this collection of music left me feeling rejuvenated as I walked back out into the cold night air, ready to face the real world again.

//
Megan G. Razzetti— come find me at a show or see what I am listening to here