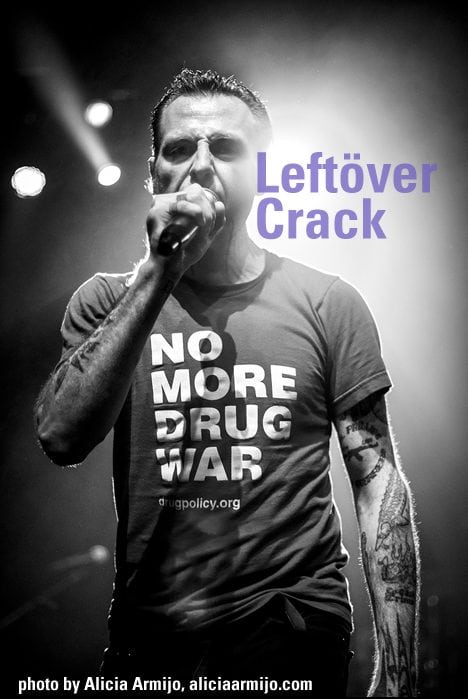 On a recent jaunt from a post-SXSW shell of Austin, Texas, I found myself in a particularly fortunate position to be in Los Angeles, Calif. while ska punk legends Leftöver Crack were playing three shows of their “Left Coast Tour” in Southern California this past week. I made my way up the winding and ever-gorgeous Pacific Coast Highway to catch them at the Majestic Ventura Theater in downtown Ventura, Calif. on March 24th, 2017—majestic, indeed.

At this particular show, Leftöver Crack packed the house and shared the stage with Naked Aggression, Starving Wolves, and Bad Cop/Bad Cop. Though I was unfamiliar with these opening acts, it became very clear by the swiftly stirring verve of the mosh pit that these bands were all here to make their own distinct impressions on the audience. Austin, Texas punk combo, Starving Wolves, made a particularly memorable gesture to dedicate an anthemic song to the women in the crowd and specifically to those whose reproductive rights are being threatened by Texas legislature. In their own way, each of these bands expressed their jubilation to play for and with their punk rock comrades, including—but certainly not limited to—the headlining act.

I have been reveling in and fervently screaming my lungs out to Leftöver Crack’s music for more than ten years. Like many fans in the crowd that night, I could not have been happier with their hit-packed set list. Inspiring some due nostalgia in all, Leftöver Crack opened the show with “Stop the Insanity,” which was a certain crowd-pleaser from their first album, Mediocre Generica. Following that, the band seamlessly played many fan favorites—“Rock the 40 oz.” and “Gang Control” from their second full-length album Fuck World Trade; along with new songs as “Don’t Shoot” and “Bedbugs and Beyond” from their latest record, Constructs of the State. This long-awaited, new album has—no doubt—maintained all of Leftöver Crack’s original dynamism, substance, and wit that has kept their steadfast fans ravenous for more.

The band closed out the show by resurrecting a much-loved cover from Choking Victim, the band from which Leftöver Crack originally formed. The band specifically fulfilled their fans’ request to play “500 Channels,” encouraging an evermore exultant and violent circle pit.

Be sure to keep an eye out for Choking Victim’s recently announced, reunion for their “Zero Fucks Tour” this spring!

Alicia Armijo is a photojournalist based in Austin, Texas and Los Angeles, Calif. Her photography can be found at www.aliciaarmijo.com. She can be reached at [email protected] or on Instagram: @alicia.m.armijo.