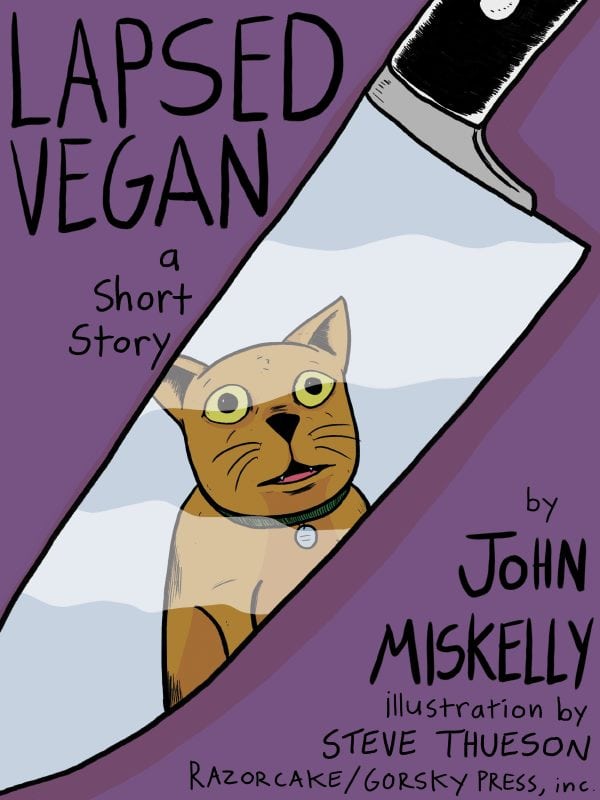 John was strictly vegan, except for when he occasionally ate gelatin-based candy and, sometimes, one of the neighborhood cats. The candy was a constant source of temptation and, thusly, shame. They sat in bowls on colleagues’ desks, and were offered as cheeky and knowingly infantile gestures at marketing conferences. The cats were a gesture, too, one made on his part from a moral standpoint, as were the dogs he consumed on certain occasions.

He got them when they wandered into his garden, skulking across his small patch of lawn with the complacent swagger one would expect from a species granted what he saw as a completely irrational and underserved permanent reprieve.

He made a point of never deliberately luring them. It seemed fairer that way, more sporting. Besides, with no animal products in the house (other than that of his victims), he had nothing to tempt them with. He found they came anyway if he sat on his back step long enough, cats of course being widely known for their idiosyncratic curiosity and the often fatal consequences of that therein.

He did it in his basement with a nail gun to the back of the head. “Look at it, like a tiny bolt gun,” he would chuckle to himself. “It’s quick and painless, they don’t feel a thing. Don’t worry, kids, he was free range!” It never got old—sometimes he’d have to steady his hand from repressed giggles and end up sending the nail clear wide of the mark and into the basement wall. Worse was when it went through the neck. The clean up job then was extensive and tiresome.

He conceded there was little progressive argument to his habits (except maybe for the birds. He could argue he was saving a lot of birds, fifty-five million according to the RSPB). ­No material progress was made by destroying something else, besides a feeling of contributing to a minor and paltry moral rebalancing.

And also dignity. He was, he thought, killing in the name of esteem, returning to those pampered animals he butchered an equality of treatment, repositioning them in the food chain, and delivering them from the indignity of privilege and dependence. Better to die by nail gun than spend another Christmas with a gaudy piece of tinsel round your collar.

Sometimes during the butchering process, the adrenaline and cocaine (as plentiful at those conferences as the candy) coursing through his body would surge into his brain and curdle there, and the cats would talk back, plead their case, and he and his meal would engage in philosophical debates about this, that, and the other.

“This seems like a lot of work to make a point that no one even sees,” said a tabby from the cul-de-sac half a mile from John’s house.

“Well, I at least get some sustenance out of this. You’re a lot cheaper than seitan,” said John.

“As is the whole industry, isn’t it? A holocaust of pigs and cows for something we don’t even need anymore, a luxury product. At least I keep track of my kills; you’re not completely anonymous.”

“Well, what can I say—I’m touched,” said the tabby, dryly.

“You’ll be remembered, by me and your owners.”

“Small comforts,” said the cat. “Also, I see by the state of your pupils you’re on some kind of substance. Illegal, no doubt. I don’t suppose you’ve considered the suffering and injustices in that particular industry?” asked the cat.

John ignored the voice and concentrated on neatly hacking off the feet and tossing them into the bin. But the shock of the nail through the skull had skewed the cat’s eyes, giving its face a kind of frozen look of knowing condescension that he couldn’t disregard.

“Look,” said John, finally. “I just think you shouldn’t get preferential treatment just because you look funny in a miniature pixie hat or dressed like Batman on YouTube or whatever they’re doing to you this month. Why should you be the exception? Why should you get away with it?”

“‘doing to you.’ Notice how we’re the object of that sentence. We don’t exactly have much choice in the matter. Also, as a member of the human species, and of the Western first world for that matter, I’d be careful talking about ‘preferential treatment.’ By your logic we should kill a middleclass Frenchman for every dead Palestinian, or a double garage owning Canadian for every refugee drowned in the Mediterranean. Or maybe a British suburban office worker for—”

“It’s the balance, the principle,” interrupted John, wiping the sweat from his eye sockets and bringing the knife down harder than necessary on the point where the tail met the body.

“Yes, of course, the balance,” said the cat. The shock of John’s last cut had jolted its head slightly sideways on the cutting board so that it now had an air of dismissive contempt.

John sighed and put his hands on his hips, then wiped them down on his apron and marched over to the corkboard where various crumpled bloodstained news clippings were pinned. He prodded a bloody finger against one in particular. The shiny wet crimson of the recent smudge contrasted with the dark brown of those already there.

“Look at this,” he said. “‘Taiwan Bans Dog and Cat Meat as Attitudes Change’.”

“Most vegans would call that progress,” said the cat.

“No mention of saving any pigs or cows or chickens. Not even a mention of raising welfare standards or any of that half-baked tokenistic bullshit. It’s more privilege. More hypocrisy.”

The blood and cocaine and frustration swirled in John’s head, and he felt dizzy.

“Misdirected revenge is what this is,” said the tabby.

“You’re like those Arab terrorists killing the public indiscriminately to even the score—or rebalance I’d suppose you’d say—all those lives lost by Western intervention. Except, of course, they’ve got some vaguely subjective excuse for their bullshit, religious kinship or whatever, whereas you claim to work on behalf of a mass you can’t even talk to.”

“Also, I’m not just ‘the tabby.’ My full name given to me by my owner is Frank Lampard—”

John gave a frustrated sigh. “Yes, I know. It was on your collar.”

“After the Chelsea soccer player. I’m not sure you’ve heard of him. Did you know he’s a member of Mensa? His IQ is—”

“I know who he is!” screamed John, as he slammed the knife down on to the neck.

And then the doorbell rang.

Flustered, John dropped the knife with a clatter onto the chopping board and trudged laboriously up the basement stairs.

He swung the front door open and stood blinking into the spring sunshine. Eventually, a small figure came into focus—a boy, with a hand stretched out towards him and holding a piece of paper.

“Hello. I was wondering if you’ve seen our cat. It’s gone missing and it looks like this,” said the boy in a hurried and nervous tone. His eyes, previously directed towards the ground, came to rest somewhere in the region of John’s hip and then widened dramatically. Looking down, John saw immediately his error.

Clutched in his hand, with the index and middle finger wrapped around it in the fashion of one about to bowl a cricket ball, was Frank Lampard’s decapitated head.

“Sorry, I wasn’t meant to bring this with me,” he said.

The child continued to stare in rigid horror.

“Sorry for swearing too,” said John.

Somewhere deep within the sickly swash of his mind, John performed some mental reasoning: the kid was an immediate problem that needed a permanent solution. Also, he’d skipped lunch. Moreover, if you really thought about it, children were kind of like domestic pets in a way—they needed care and attention and regular feeding and exercise. And some at least seemed less intelligent than farm animals.

John Miskelly is thirty-one and lives in Gijón, Asturias, in Northern Spain. He has been vegetarian for ten years. He likes cats.