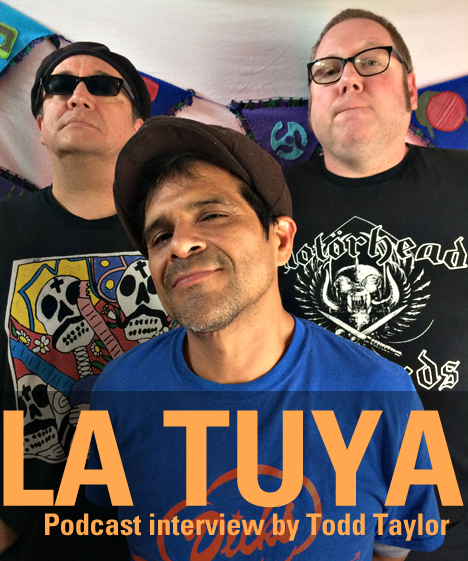 Punk… it’s paradox after paradox. True individuality still comes at a steep price. Legitimate lifers often remain outliers in scenes they helped create. Genuinely fantastic and exciting bands can thrive in the shadows of concrete freeways designed by racist policies to suffocate vibrant, poor working class immigrant neighborhoods, while directly west, Los Angeles, “The Entertainment Capital of the World,” looms like a blocky cluster of erect penises. Being born on the wrong side of the tracks (like literally ten different tracks; it’s a massive rail yard) and a concrete river is another set of realities. Nope, this interview is not one solely of legitimate gripes and despair. It’s about the power of remaining angry and engaged without that anger fully corroding hope, dignity, or compassion. It’s about three punks-without-prefix-or-suffix.

When I listen to La Tuya, I hear the grand tradition of East L.A. backyards. I can almost see the dust rise up from the pit as they blast from my speakers. The band is smart, funny, and pissed while their music sounds like blunt instruments honed to sharp melodic points. Think The Stains meet Big Drill Car. Their songs oscillate easily between both Marxes—Karl and Groucho.

La Tuya’s pedigree is decades-long, peppered with bands that mostly never had the benefit of legitimate releases when they were active—Butt Acne, Black Jax, Ollin, Our Band Sucks, Peace Pill, and Charm Machine, to name a small handful. Fuck urban colonizers planting branded lifestyle banners in “just discovered” neighborhoods. Resist gentrification and globalization. Celebrate a preexisting beautiful culture—punk and otherwise—aware and respectful of the Tongva, yet leery of all shades and hues of nationalism. Revel in the punk truism that some of the best bands will never be heard beyond their own neighborhoods. Say hello to Jimmy, Scott, and Dale.

This interview was originally printed in Razorcake #107. Available here!