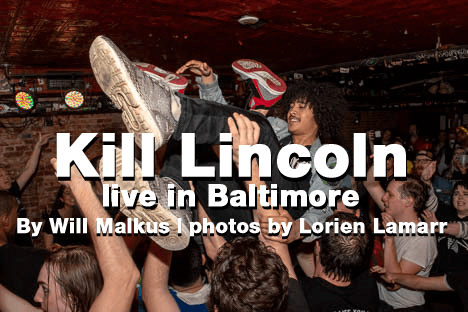 There’s a moment that comes every so often at a good, high-energy show where you’re forced to stop for a moment and recognize that you may have just injured yourself. You weigh the pros and cons of continuing to throw down amidst your fellow attendees vs. making your way to the sidelines and saving yourself the future pain, which to the conscious mind seems like a clear choice, right? But there are some bands out there that have it, that ineffable quality that takes over the parts of your brain responsible for reason and logic and tell you that the only thing that matters in that moment is that you don’t stop moving as fast as you can or singing at the top of your lungs, and damn the consequences. Kill Lincoln is that band.

So, anyway, that’s how I twisted my ankle a week before The Fest.

It was night two of the unofficially dubbed Bad Time Tour (so named for Bad Time Records, the  record label started by Kill Lincoln’s frontman Mike Sosinski) at the Sidebar in Baltimore, Md. Sidebar is something of a local legend for the Baltimore punk scene; it’s existed for decades in multiple locations over the years, but like the vermin that many outsiders consider to be ubiquitous with our city, it refuses to die. The inside looks like how a network television show might depict a punk bar: barely more than a concrete room with walls covered in layers of vinyl stickers and a slightly elevated platform at one end for the bands. PBR still costs three bucks and you can buy packs of novelty trading cards from the bartender and charge them to your tab. It’s my favorite venue in Baltimore.

In addition to being just another stop on the tour, this show was also something of a homecoming for Kill Lincoln, who were a Washington, DC band at their inception and considered Baltimore to be their second home. I’ve seen them play Sidebar before, but it had been a very long time since they’d been back to Baltimore and everyone I knew had been talking about this show for weeks or even months ahead of time. Still, we had plenty of time for the anticipation to build even higher before we got to the main event, because Saturday night was the only five-band bill of the tour.

Now, with five sets on the docket you’d probably expect the crowd to pace themselves. After all that’s a long night for anyone, even if you’re just standing still and watching. But if anyone had come to the Sidebar that night with the intention of taking it slow, those notions were tossed to the wind as quickly as the confetti that local opener Strong Zero released out over the crowd. Standing still isn’t an option during a Strong Zero set, because while there might only be three members officially listed, the truth is that every single person at the show is in the band for as long as they’re playing.

Strong Zero frontman Ryan Geelhaar wasted no time before distributing props out to the crowd mid-song, namely tiny witch hats, a red spinning emergency light, a cowbell, and the aforementioned confetti cannons. It’s hard to pick out individual Strong Zero songs only because the band literally never stops; even periods of talking or running around through the crowd are backed by drums or bass, and for their last song they moved the entire band (drummer Emily Habighurst’s entire kit included) off of the stage and out into the crowd so that the punks skanking and dancing in a circle were doing it with them instead of for them. By the end of their set, bass player Tommie Summerville was flat on their back in full witch regalia and Geelhaar was standing on the bar. There are a few constants in this world, and one of them is that Strong Zero brings the party.

While Strong Zero was a new addition to the lineup, I’d seen Thirsty Guys play the night before in Washington, DC and I’ve been a fan since their debut album Parched came out earlier this year, so please understand that when I say that their set at Sidebar was one of the most beautiful trainwrecks I’ve ever seen, it is one hundred percent from a place of love. The New Jersey ska punk four-piece had barely started their first song when vocalist and keyboardist Joe Scala discovered his keyboard had stopped working entirely. In the interest of full disclosure I will say that there had been technical issues with the keyboard the night before as well, which might explain why he immediately lifted the keyboard over his head in frustration and hurled it out into the middle of the crowd while screaming “fuck this thing up as much as you want!” True to his wishes, a room full of Baltimore punks descended on the poor Casio and stomped it to pieces. For the rest of their set, Scala performed all the keyboard parts acapella in addition to singing the actual words.

Thirsty Guys’ inexplicably cursed set continued as guitarist Garret “Cheech” Weber managed to make himself bleed and Scala ripped his shirt open while diving headfirst off the stage and into the crowd. “This is what happens when you let a drummer try being a vocalist!” he yelled, followed by a quieter: “Fuck, I liked this shirt.” It served as an excellent illustration of the part during their closer “Not Playing Fest” when he asserts that there are a few things that he’d like to get off his chest, so he added the line “like that shirt!” and then proceeded to try to rip his own chest hair out by the roots like he was possessed by the ghost of GG Allin.

Thirsty Guys eventually yielded the stage to Eat Defeat from the U.K. before a cartoon anvil could fall from the ceiling and crush them, leaving us in the capable hands of what I can safely call the best pop punk band from Leeds that I’ve ever seen live. The northern England quartet brought two things with them to prove to the crowd that they were the “most ska” band on the bill: Jeff Rosenstock’s guitar, and the assertion that people have told them before that they sound like bands from Tony Hawk’s Pro Skater. To their credit, both of these are true. All jokes aside though, Eat Defeat genuinely blew me away and I’ve been revisiting a lot of their songs in the days since seeing them, particularly the cleverly named “The North Remembers.” That isn’t to say they didn’t match the personalities of the rest of the bands; frontman/bassist Summers did at one point lament not being allowed to take his denim jacket off because he’s sponsored by Playboy before turning around and showing all of us the metal buckle featuring the Playboy logo on the back. He also apologized for Eat Defeat’s only gimmick being the enormous Big Gulp he’d sip from periodically, but several times he did use it as a place to put his leg up during a song and the symbolism of an Englishman’s shoe crushing a clear symbol of American capitalist gluttony struck me as especially poignant. Eat Defeat snuck a fantastic cover of Blink-182’s “Anthem Part 2” into the middle of their set and then closed with their own incredibly catchy “Shortcuts.”

As excited as I was to see Kill Lincoln and all of the other great bands they brought with them, there was just something so inescapably cool about the fact that I was about to see a punk band from Japan. Japan’s punk scene has fascinated me for years, and while it’s always been a dream of mine to see it firsthand I was more than happy to see a little part of it come to my city instead. S.M.N. are a longstanding punk rock band from Fukuoka with a sound that oscillates between ’90s skate punk and trad ska or reggae. Technically S.M.N. stands for Slackers Make Noise, but during one of their songs that sounded almost like a Sublime song (if Sublime were good) I did make a note that it could just as easily stand for Sublime Might Not suck?

The sheer joy that all three members of S.M.N. were overflowing with quickly won everyone in the crowd over, and if there were any holdouts then the band’s top notch cover of Less Than Jake’s “The Science of Selling Yourself Short” certainly fixed that. At the end of their set the entirety of Sidebar hailed the Japanese band with the traditional Baltimore encore chant of “69 more songs!” and in a stroke of true inspiration S.M.N. treated us all to a super-fast punk rock cover of the childhood nursery rhyme B-I-N-G-O that became an instant sing-along.

And last, but obviously not least, was Kill Lincoln. If you like ska in any way, shape, or form then this band is a must-see, but what’s truly impressive about them is how they can sound like some of the biggest ska bands out there and somehow still sound completely unique at the same time. They have songs where the horn section puts Streetlight Manifesto to shame, others that could easily be Less Than Jake songs if not for the much heavier guitar breakdowns, and every one of their albums has at least one track that’s just a straight up hardcore song. In a genre that’s almost universally mocked for every band sounding exactly the same, Kill Lincoln manage to honor the bands that inspired them in the first place while still sounding like no other band out there right now.

After almost a decade of playing together Kill Lincoln pretty much have their setlist down to a science, but at this particular show they treated the crowd to some of the Catch 22 covers they’ll be playing at The Fest. Professional skanker and hype man Drew Skibitsky joined the band onstage just long enough to play the intro to “Giving Up Giving In” on an acoustic guitar before throwing it out into the crowd and following it with his whole body. At one point the members of Eat Defeat joined forces to form a human pyramid that stretched all the way to the ceiling, and two other people spent the entire length of a song with one on the other’s shoulders. By their second song the demarcation of where the pit ended and the rest of the crowd began became nonexistent, and any lies I’d told myself about taking it easy were quickly forgotten. At one point I took a bad step and felt my ankle roll under me. I experienced that moment, weighing the pros and cons of what to do next, but when (amidst more chants of “69 more songs!”) Kill Lincoln played the familiar intro to Operation Ivy’s “Knowledge,” the decision was made for me.

Some bands have that power, and we all danced on.

Will Malkus is a writer, librarian, PR person, and concert photographer based out of Baltimore, Md. You can check out his photography and writing portfolios at charmcorephoto.com.