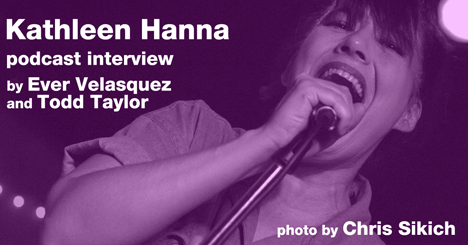 Kathleen Hanna Podcast Interview by Ever Velasquez and Todd Taylor

Kathleen Hanna Podcast Interview by Ever Velasquez and Todd Taylor

Let’s look back at the late ’80s. It was largely a grim time for punk. The first two waves had crashed and much of its initial groundbreaking diversity had been washed out. Punk on a national level was definitely out of vogue; very few clambered to participate compared to earlier in the decade. Violence was prevalent, expected.

A strident, explicitly feminist punk band called Bikini Kill formed in 1990 in Olympia, Wash. Confrontational and unrepentant, it brought out the best and worst in punks. Misogyny, sexism, and patriarchy responded with ugly reactionary displays, calling into question if punk was truly an alternative to the worst aspects of mainstream culture. Was this just the same shit with a different haircut? Bikini Kill was a lighthouse and safe harbor, fore-fronting women, making space for those traditionally pushed down and aside (including, but not limited to, circle pits, workplaces, and on the street). At a time when very few bands were having conversations about gender and sexuality, Bikini Kill used a bullhorn.

I’m not one for heroes or icons, but it’s historically accurate to state Bikini Kill was at the center of the riot grrrl movement and served as an important voice in feminism’s third wave. It’s not an overstatement to say riot grrrl saved lives. A large component of Bikini Kill was its singer and literal mouthpiece, Kathleen Hanna.

Near Bikini Kill’s end in 1997, Kathleen began recording a solo record in her bedroom. Julie Ruin is personal work. It’s both interviewer Ever’s and Kathleen’s mom’s favorite—electronic, intimate, sample-heavy—and provides the sonic bridge to Le Tigre, a band whose stock trades on bouncy, feminist rump shakers. Violence at shows plummeted. LGBTQ inclusion—reminiscent of punk’s first wave in L.A.—skyrocketed. I can’t help but think Emma Goldman is smiling from her resting place. Le Tigre had picked the lock. Finally, an inclusive, glittering revolution that was truly danceable.

Le Tigre unfortunately ended due to Kathleen’s health issues. She suffered and almost died from shamefully-undiagnosed-for-too-long Lyme disease. Thankfully, she recovered. Looking to flesh out the unrecorded songs from her solo record, The Julie Ruin was formed in 2010, reuniting Kathleen with Kathi Wilcox of Bikini Kill. Goddamn it, this band is really good. More than that, the music’s relevant.

There are two versions of punk in my book. There’s the contracting punk universe which becomes a dark, cynical, self-parodying, collapsing shell and there’s the expanding universe that reveals subtle new spectrums of light and pervades a sense of infinite possibilities. The Julie Ruin is the latter.

This interview, at its essence, is about the courage to restart several times—through darkness and light, through sickness and health—and continue creating truly meaningful work. Kathleen Hanna is responsible for some of my favorite music. I celebrate her entire catalog and love her voice.