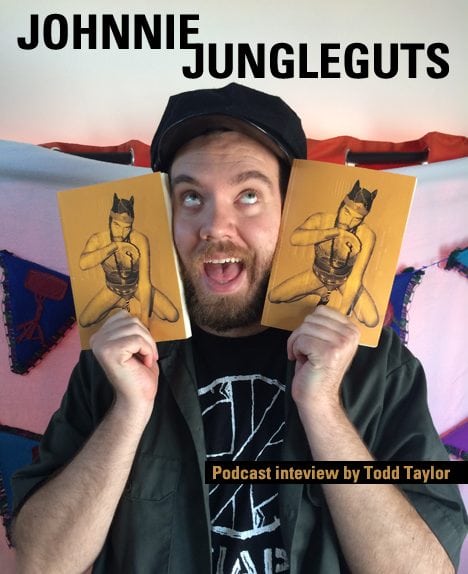 I’ve known Johnnie Jungleguts for close to ten years. I remain a fan of the band he was in, the now-defunct American Grizzly, seeing him table at the L.A. Zine Fest (and picking up his wonderful zines), and being a witness at Kchung radio when he directed and participated in a twenty-four hour marathon of playing the video game Final Fantasy VII.

Part of the reason I like Johnnie so much is his unbridled enthusiasm and his ability to become a colorful prism across an array of interests: video games, the twisted knot of fame, being a gay man, Pokemon, comic books, and volunteering at animal rescues. Life Sex Fandom is full of short blasts and quick cuts. It reads like electrons zinging around a weighted nucleus. It’s a swift book filled with lusty, zesty elliptical orbits of poems, short essays, and internet posts. Yet it’s a book that’s not cotton candy at its core. It has a cumulative density. The walk-away is a generous book by an original artist who has a lot to say in a compact way.

This interview covers: An unequivocal lube recommendation, the sentence “those aren’t male/female dolphins” changing a young Johnnie’s life, the best-ever comic book villain, and showing deference to the Bronies when on Storage Wars as an expert appraiser.