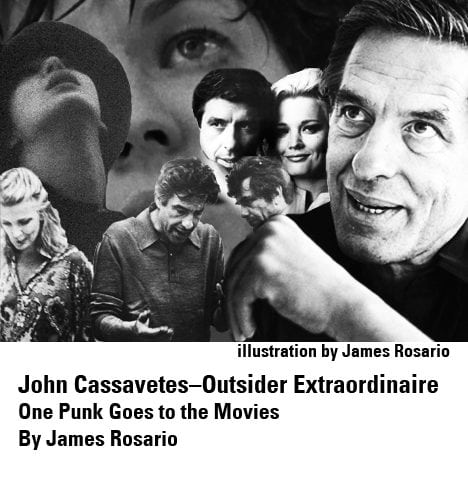 John Cassavetes–Outsider Extraordinaire: One Punk Goes to the Movies By James Rosario

One Punk Goes to the Movies
By James Rosario

“I have a one-track mind. That’s all that I’m interested in–love. And the lack of it.”
–John Cassavetes

I’m sure you’ve seen John Cassavetes in something. Maybe your dad made you watch The Dirty Dozen (1967) when you were a kid like mine did, and your favorite character was Franko, the one with the most outwardly psycho demeanor. Or maybe you’ve seen Rosemary’s Baby (1968), where he played Guy, Rosemary’s seemingly loving husband. Cassavetes had a talent for playing sympathetic, yet villainous characters. There was always a hint of insanity just under the surface, and it usually boiled over by the end. He was considered a marketable, go-to actor in television and movies throughout the 1950s and ’60s, with just one catch: He hated Hollywood.

He was writing and publishing industry critiques as early as 1959. In the spring of that year, in an article for Film Culture titled “What’s Wrong with Hollywood,” he unapologetically declared “Hollywood is not failing. It has failed.” He was an actor who cared deeply about storytelling, his craft, and filmmaking –all things he felt required freedom from the system. He wanted to tell his own stories on his terms. Rejecting Hollywood aesthetics and ideals, in 1958 he became a director—and along the way inadvertently kick started the American independent film movement. Cinema is a strange and frustrating industry.

On the one hand you have the artists: The writers, directors, cinematographers, actors, and so many more. They have an idea and a compulsion to see it through. On the other hand, you have the money: The financiers, producers, studio heads, and distributors. What they’re interested in is far from artistic. In fact, they often couldn’t care less about art. Compromises must be made. Artistic expression must be balanced against marketability. In the process, inevitably, it’s the art that’s more likely to suffer. But, one can’t exist without the other. Movies are expensive to make. There’s no picture without artists.

John Cassavetes knew this all too well.  He’d been working in television for the better part of a decade before he decided he’d had enough. But he also knew where his bread was buttered. He didn’t quit Hollywood altogether. Instead, he went the route any of us who’s ever self-financed a demo, started a label, or lost money on a tour has done: he worked a shitty job to save up money to do what he loved—to make the kinds of movies Hollywood wasn’t interested in. His approach was to work within the system just long enough to get what he wanted from it (hence his starring roles in the aforementioned The Dirty Dozen and Rosemary’s Baby)—which was money to make his own movies. While this tactic is relatively common today (known as “one for them, one for me”), it is rarely met with the acclaim Cassavetes eventually garnered, and done so with considerably less risk. Cassavetes balked at studio interference all the way down to the distribution of his films. I’d like to see Ben Affleck do that.

In 1958 and 1959, Cassavetes went into debt making his first film, Shadows. How did he pay off his debt? He took the title role in the television series Johnny Staccato, a jazz musician/private detective who solved mysteries out of a Greenwich Village nightclub. The show was a critical hit due to Cassavetes’s acting chops, but was canceled after twenty-seven episodes. However, the goal had been met; he’d paid off his first feature film.

And what of Shadows? Critics and historians credit this tale of race relations, sex, and love set in New York’s jazzy beatnik scene as the first in a long line of acclaimed American independent films—that is, films shot without the help of a major studio. Of course, there had been independent films before Shadows, but what Cassavetes made was a breakthrough. It was a model for what could be accomplished with enough determination and hunger. It’s a sloppy affair, with sound out of sync, out of focus cameras, and choppy editing, but it managed to impress a generation of filmmakers. Martin Scorsese is often quoted, after an early screening of Shadows, that “If he could do it, so could we!” Shadows, along with French contemporaries Breathless and The 400 Blows (also both released in 1959), went on to influence not only how independent films could be made, but how they could look. Perhaps most importantly though, they served as a gauge for the major studios as to what types of movies audiences were ready for, and what types of themes they wanted to explore.

By the end of the ’60s, Hollywood took notice of the types of stories Cassavetes and his French counterparts were telling, and did their best to follow suit. Films like Bonnie and Clyde (1967), The Graduate (1967), Rosemary’s Baby (1968, and starring one John Cassavetes), The French Connection (1971), and A Clockwork Orange (1971) took the world by storm, ushering in a new wave of cinema, and introducing a new crop of innovative filmmakers—all thanks in part to the trail that John Cassavetes blazed.

Between Shadows and his next independent feature, Faces (1965), Cassavetes took a handful of Hollywood directing jobs that left him more dissatisfied than he’d ever been before. He found his films being re-edited to suit studio needs and vowed to never make a commercial film under these circumstances again. He did a lot of acting, too, with predictable results on his notion of Hollywood.

It’s interesting to see these films with the knowledge that the only reason this amazing actor is even on set (his performances were almost always singled out for praise) was simply a means to an end. He clearly enjoyed acting. In fact, he loved the craft nearly as much as directing (understanding acting is what allowed him, as a director, to get such passionate performances from his actors), but was always uncomfortable plying his trade within a system that didn’t appreciate it as he did.

Faces is all angst, anger, frustration, and hypocrisy. At its core, it’s about disillusionment with complacency. More importantly, it’s about the fragility of the male psyche. Cassavetes was obsessed with exposing this fragility. He continuously shows us that men have an image to uphold, and this image is usually dependent on—not how women actually feel about them—but how other men perceive women to feel about them. The men of Faces treat every aspect of their lives as business or conflict. Their lives are battles to be won, but it’s very easy to see right through the hypocrisy, and this is what they fear the most—that everyone else will see them as the pathetic and weak creatures they are. The men of a Cassavetes film are often brutish and childish. In a sense they’re typical and real, and Cassavetes exposes this better than anyone alive or dead.

Watching a Cassavetes film can be an exercise in patience. His scenes are long and full of tension. They feel like they could come off the rails at any time. They are less like movies and more like every time you’ve been in a room with that drunk, obnoxious, uncontrollable friend you just want to leave. Cassavetes is a master at emotional manipulation. He brings his scenes to a boiling point and then eases off. Over and over. If you’re used to your movies coming in nice little packages, Cassavetes may prove a challenge. If you see worth in a more “real” experience, Cassavetes is a must. His quest to understand what makes people tick and what drives them is central to his films and his personality. He was a truth seeker, and his films are a record of what he’s discovered.

Case in point: A Woman Under the Influence (1974), the story of a working-class family that’s woefully ill-equipped to handle the mental illness of one of its members. Cassavetes’s wife, Gena Rowlands (in my opinion the most criminally underrated actress of all time) plays Mabel, a woman who suffers from an instability her family can’t comprehend. Her husband, Nick (Peter Falk) loves her dearly but has no idea how to handle the situation. It’s a long and very complicated film, but one of the most rewarding, yet difficult experiences you’re likely to find in cinema. What Rowlands and Falk—and the rest of the cast—deliver is nothing short of amazing. Rowlands would star in many of Cassavetes’ films. The level of teamwork and support they had in each other is evident right there on the screen. It’s electrifying. That she isn’t more highly regarded seems like a crime to me, but as Kent Jones said in his article “The War at Home,” Rowlands was “a little too weird for superstardom.” I couldn’t think of a more appropriate compliment if I tried.

The cycle continued all the way to Cassavetes’s death in 1989 from cirrhosis of the liver. He continued acting and reluctantly directing film and television productions to finance his films. Other notables are The Killing of a Chinese Bookie (1976), Opening Night (1977), and Gloria (1980). In each, Cassavetes continued his exploration of the nature of love and the human psyche. As with many great artists, he was much more appreciated after he was gone. His films aren’t neat or slick. Quite the opposite, really, but they were influential beyond belief—tonally, thematically, and economically. They showed Hollywood what the public was really after in a picture, and they kick started and inspired an entire generation of filmmakers. Most importantly, the films of John Cassavetes were done without influence from any money interests. There was zero compromise. Total DIY.

James Rosario is a film critic living in Asheville, N.C. He loves punk rock and movies, especially when the two collide. He can be reached via his blog, thedailyorca.com