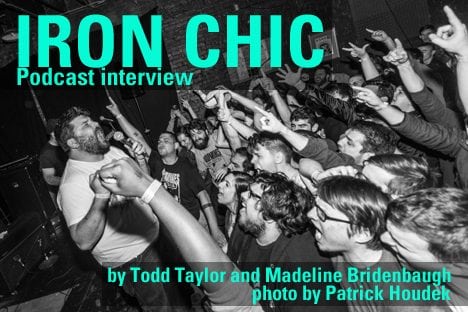 The Hobo House in Long Island, New York looks pretty much like every other house on the street except with more broken things in the front yard.

There’s a high-mileage mini-van in the driveway, “Up the Punx” stencil graffiti and a Latterman sticker on the front door. Phil answers the door and leads us back to a sparse, ordinary room with acoustic foam on parts of the walls and ceiling. Monitoring speakers flank the computer. Exposed PVC pipes from upstairs are above us. Cigarette smoke fills the room.

Downstairs from where this interview happened is where Iron Chic has done most, if not all of their recording. This house is their nerve center. It’s not fancy. It’s functional; all geared towards recording music.

Iron Chic isn’t a band that lends itself well to hyperbole; I just really like them. They’re a band that plays melodic and heartfelt punk music. It’s really fucking catchy. I have listened to their two full-length LPs over and over again, for several years. Triangulate Low Culture, Tiltwheel, and RVIVR and you’re in the vicinity. It’s emotionally honest, strident DIY punk.

Mike Dumps and Jason Lubrano show up shortly after us. They’re unassuming, warm, a little quiet, like Phil.

Here’s what we talked about.