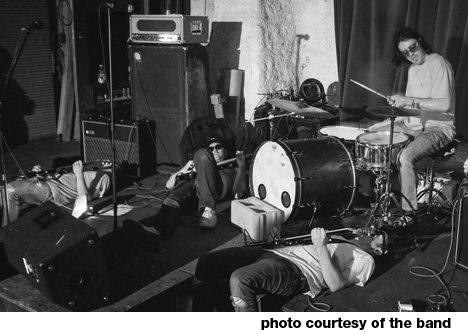 Since 2012 Pittsburgh’s The Gotobeds have been redefining what DIY indie can and should be. So far they’ve released two flawless albums Poor People are Revolting and Blood // Sugar // Secs // Traffic. Their third, the facetiously titled, Debt Begins at 30 is the bands strongest and most cohesive to date. But unlike the majority of indie albums this year, they’ve brought some friends along for the ride too. In fact, each track features a guest such as Greg Ahee, Scott Macintyre, Mike Seamans, Jason Baldinger, and Gerald Cosloy.

I spoke to guitarist Eli Kasan about local scenes, getting Gerald Cosloy to record guitar loops, and how they channelled hip hop when recording Debt Begins at 30.

Interview and introduction by Nick Roseblade

Nick: Where are you now and how has your day been?

Eli: Sitting at work in the east end of Pittsburgh. It’s been a quiet Monday where I have the lights out, listening to Karen Marks, and drinking coffee. Pretty goddamn good as far as Mondays go!

Nick: What is the Pittsburgh scene like at the moment? Who should we be checking out?

Nick: How does Debt Begins at 30 differ from your previous albums thematically and sonically?

Eli: This is a really good question, and one I do not have a great answer for. It’s really hard to be subjective about them or how they got made—they sound like variations on a theme for me, the only thing that would be different about this record is it was the first Gotobeds release to not be recorded at our friends’ basement in Pittsburgh, so sonically it was a more “pro” studio, if that’s your kinda thing.

Nick: Are you happy with how Debt Begins at 30 has been received by the press and fans? Or do you not pay attention that after the album comes out?

Eli: I like reviews and think criticism is important for “art”—don’t gag, bear with me. It can help provide levity or insights that you yourself cannot see when you’re in the thick of making things. Thus far, it seems like folks are pretty psyched on it—I know some hardheads here in Pittsburgh that will tell you if you’re fucking up—and early reports are that it’s our best LP yet, so that’s been comforting to hear. I read the stuff, but try to balance that with my personal feelings, and I’m very happy with how it turned out. So happy I can’t wait to make another record that sounds nothing like it!

Nick: When did you start working on the album?

Eli: We kept writing instantly after releasing the last album; we maybe felt a little rushed writing that record, so we wanted to have a longer lead time and tour around on this set of songs before releasing them. We recorded the bastard in 2017 and took forever to finish it. Comically, our Pittsburgh engineer Matt, who did the post-production quipped, “You don’t want to finish this record, do you?” so I think I was inside my own head too long.

Nick: Where was Debt Begins at 30 recorded and by who?

Eli: We recorded Debt in two phases: we did the basic tracking, our overdubs and most vocals at Electrical Audio in Chicago with the talented Matt Barnhart. The second phase we call the “treatment” where we add the found sounds, samples, shit like saxophone, all the guests, et cetera and we did that in Pittsburgh at our buddy My War Matt’s house. This is where we’ve done every other Gotobeds release.

Nick: Were there any musical/cultural references points you were consuming that helped shape the album?

Eli: Tons! As far as art influences for the design, I’m always inspired by Guerrilla Girls, Jenny Holzer, and Hilary Morrison’s work with Fast Product. They’re the gold standard as far as I’m concerned. Musically, Gavin mentioned how much he liked LPs like Silkworms It’ll be Cool or The Wipers Youth of America that were works by one singular artist, but felt like a mixtape within that, with a few different styles represented. That pretty much set my mind in motion trying to write an album that had that feel. Culturally, the world was on fire, so my love letter to my stepdaughter (title track “Debt Begins at 30’) hits on how I felt about the world or my place in it, or my failings to connect with it.

Nick: What is it about Jenny Holzer and Hilary Morrison that you admire so much?

Eli: Jenny is the ultimate brain food. Her work is super inspiring and the text adds an abreaction to conventional thought. She has more quotable lines attributed to her than most bands LPs have words. Hilary Morrison seems overlooked by history and her place at Fast Product. Growing up, everything I’d read would focus on Bob Last’s brilliance and vision. While he was part of the equation, Hilary gave the label it’s most vital part: the aesthetic. Her graphics for the label are still unparalleled and The Flowers are a favorite of mine too.

Nick: Was the idea for the album in your head the same as what came out?

Eli: Barring fixing one or two bum notes, this was 100% the idea in my head pressed onto plastic. That’s a large part of how long it took to come out; I didn’t want to finish it just to have it out so we could keep hitting a touring circuit. I wanted it to sound spot-on and think we achieved that.

Nick: When did you realize you were making a hip hop-style mixtape?

Eli: When we decide to head to Electrical Audio we already had two guests confirmed so we just decided to make it ridiculous and ask friends to be featured on every track. Somewhat by design and somewhat by accident, but all of it fit under the idea of growing older and being indebted to our friends.

Nick: Who was the first guest confirmed for the album?

Eli: We had asked Joe from Protomartyr before booking studio time, same with Tim from Silkworm so they were the firsts two.

Tim was the one who suggested we come to Chicago and work with Matt Barnhart—who was our friend and mastered all of our LPs up to date—so it seemed natural to have Tim stop by and contribute.

Nick: Who was the guest that made you the most excited to work with?

Eli: Cannot really pick one—was equally excited about each person for different reasons. Some guests we asked to sing certain lines, like Tracy from Positive No in “Twin Cities” and were super pleased with how well that worked out. And some guests we gave up the ghost for them to do what they wanted, as something specific wasn’t needed—this was for the alt. version of “Debt” that Victoria from Downtown Boys kindly sang on.

All in all, it was thrilling to try to make it work and even more thrilling when it did work!

Nick: Did everyone you ask say yes?

Eli: Yes, with one exception, Sharkey from the excellent Dark Blue was in the midst of moving when I asked him. The song he was slated for—“Poor People” if yr keeping score at home—already had two guests. So, by the time I could’ve reminded him, it seemed full already. I did not press it. I do love his voice, and his songs, so I’m slightly remiss, but we’ve been friends for a while so I can’t imagine not asking him again.

One caveat of folks we asked to guest was that we were already friends or friendly with them. No star-fucking, just asking folks we’ve met along the way if they were interested. Some guests we’ve known forever. Some, like Bob Weston, we met in Chicago and found him really kind and fun to hang out with.

Nick: How did you approach Gerard Cosloy about appearing?

Eli: I think I texted the ol’ boy and asked if he was game. He put out the first LP and we’ve been friends since. Love the mf’er! Initially I asked for some guitar-scree that we could use to fill in the gaps since we aren’t allowed to illegally sample anymore—long story not fit to print! He ended up sending like ten tracks of guitar loops that were amazing, I wish he’d release that straight up ’cause it was wonderful. We ended up just cutting out parts and inserting them randomly—or non-randomly as was the case with the song “Poor People Are Revolting.” He added noisy guitar and during the quiet break we added some of his guitar that was making a “whooshing” noise that I have no idea how he made it.

Nick: Once word got out you were having guest spots, did anyone approach you?

Eli: I don’t think so? Hard to remember. It was kind of a blur cause we were trying to race to finish it, but also coordinating recording time between our and the guests’ time schedules with outside engineers. I’m still amazed we pulled it off, though it does explain a three-year gap between LPs.

Nick: Where do you go from here? Will the next album also feature guest spots, or was this just an experiment?

Eli: We’ve always had guests on our records. My old roommate Evan and my sister-in-law Danielle are on every record. Now that we’ve blown the guest thing wide open I’m inclined to not have anyone be included on the next one; not because I didn’t find it thrilling or successful, just don’t want to rest my laurels on any one idea, so that things can continue evolving. That said, someone I quite admire has asked to produce the next one, so who knows, they’ll probably be all over it!

Nick: I know that band members are into different things, but what are the bands/albums that everyone in the band agrees on?

I want to make the next LP soon and make it very ugly with less overdubs. No idea why, just feels right to make something immediate, though with our tour schedule it still will probably take a year or two.