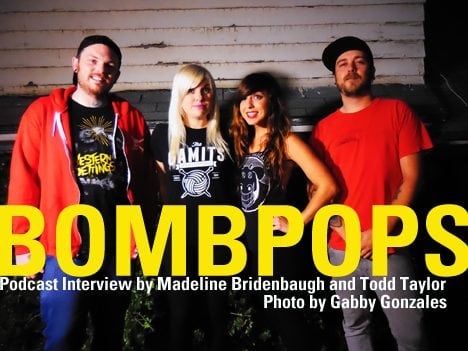 Interview with The Bombpops, Razorcake Podcast by Madeline Bridenbaugh and Todd Taylor

How many Bombpops does it take to get a sugar high on ’90s skate-influenced pop punk? I’d say about four straight out of Southern California in the form of two shredding lady guitarists and two dudes in a long-familiar rhythm section.  The Bombpops are back to a touring schedule as frenetic as their pop punk sound and party-on-stage performances following personal breaks, personnel changes, and multiple hospital visits. They may not be clean, and they probably aren’t rolling street-legal, but they are deep in the throat of your mom.