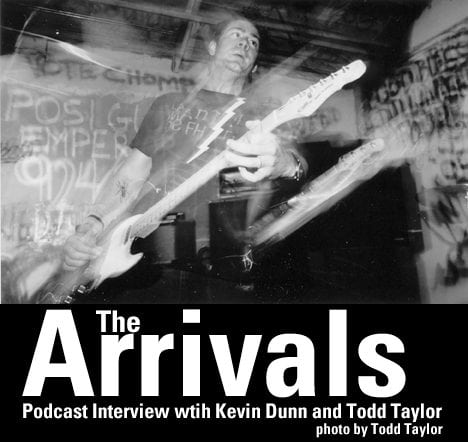 Interview with The Arrivals, Razorcake Podcast by Kevin Dunn and Todd Taylor

Interview with The Arrivals, Razorcake Podcast by Kevin Dunn and Todd Taylor

The Arrivals are a national treasure, both individually and collectively. Isaac Thotz (vocals, guitars) is a thoughtful grad school dropout who also creates beautiful, Syd Barrett-style soundscapes in Treasure Fleet. Little Dave Merriman (vocals, guitars) is a big, smiling slab of goodness who released his eclectic and upbeat solo album Odd Bird in 2014. Patrick Costello (bass) was already a punk icon in the legendary Dillinger Four before he joined the Arrivals. And Ronnie DiCola (drums)—an absolute beast on the kit—defers to the others when the tape is rolling, but is a fascinating and complicated guy in his own right. They are four amazing dudes, but the Arrivals are far greater than the sum of its parts.

The Arrivals’ first two albums, Goodbye New World (2001) and Exsenator Orange (2003), are an almost-perfect blend of dirt, grit, and pop. Think Naked Raygun fused with the best of the British Invasion, but something distinctly original at the same time. Their 2007 album Marvels of Industry established them as one of the better bands in the North American punk scene. With that album, they had acquired a new bassist (Paddy) and had clearly developed as songwriters. That may have been partially due to Thotz dropping out of graduate school and focusing his impressive intellectual abilities on crafting catchy songs rather than esoteric papers on technical philosophy. But, frankly, I was unprepared for the masterpiece that is Volatile Molotov (2010). The melodies, vocal hooks, unrelenting energy, visceral passion, bittersweet humor, and—above all—intellect, make this one of the greatest American punk albums of the twenty-first century.

But not long after releasing Volatile Molotov, the band effectively went on hiatus. Thotz made several Treasure Fleet albums and moved his family out to Los Angeles. Over in Minneapolis, Paddy got married and had a kid. That left Ronnie and Little Dave in Chicago to pursue other pursuits. In fact, it has been three years since the Arrivals have performed together on stage. But in early September 2016, they all converged on San Diego to play at the tenth annual Awesome Fest. Todd and I were waiting for them in the parking lot when they rolled up. After securing the required burrito and whiskey, we all climbed into their van and had a conversation about life, making political art, and why they feel it is important to keep the Arrivals going. Then they went inside and ripped the roof off of the venue. Here is a recording of the conversation in the van.