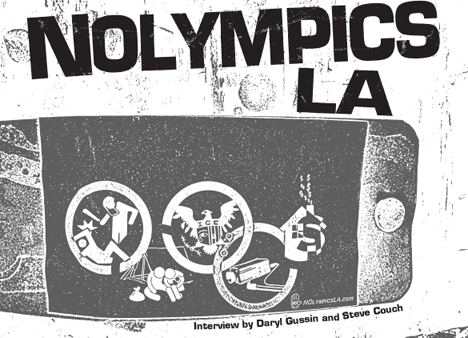 Interview with NOlympics LA, By Daryl Gussin and Steve Couch

In July of 2017 Los Angeles was “awarded” the 2028 Summer Olympics. It felt like a death sentence for working and middle class folks already struggling to keep their homes and neighborhoods intact in a city with such a visible housing crisis. Everyday more and more people are displaced, forced to relocate to neighboring inland counties or other states.

The campaign was spearheaded by Mayor Garcetti and the city council didn’t push back against his maneuvers to gain the international spotlight. Actual public input was ignored while a highly questionable opinion poll was presented showing what statisticians refer to as “dictator numbers” in support of the event. In the end, decisions were made either not fully realizing the implications, or not caring about the citizens they were elected to represent. City council voted unanimously to support the bid to be the host city. The message was clear: Those at the top get what they want.

In this interview Steve and I sat down with three organizers from NOlympics LA to discuss how we got to where we are now, the disaster looming on the horizon, and what we can do to prevent it. –Daryl

Thanks for reading this.
Please continue this conversation with the people in your lives.
Create the discourse, demand a referendum.