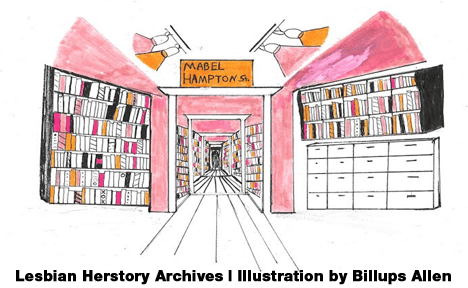 My grandmother always said land is the one thing they aren’t making any more of. Anyone who has ever tried to put together a DIY show or event knows the first hurdle: where do I do it? It’s a problem in and outside the punk community. Alexis Clements is a volunteer at The Lesbian Herstory Archives in Brooklyn, N.Y., an independent archival collection. Her years volunteering and arranging events at the archives inspired her to make her recent documentary, All We’ve Got (2019). In the film, she outlines the history of LGBTQ women's spaces and shows an array of volunteer organizations struggling to survive in the current political climate.

Billups: Can you talk a little about your inspiration for the documentary?

Alexis: There’s a little bit of a long story, but I wrote a play inspired by one of the spaces in the film, the Lesbian Herstory Archives in Brooklyn.

Billups: You might remember I came to one of your readings there.

Alexis: Oh, that’s so cool. You were there. It was so long ago. Thank you for coming out.

Billups: It was fun seeing it.

Alexis: Well, part of the funny story of how it all came together is that the play actually just had its world premiere the week before the film, which is wild. So I wrote that play and because it’s all queer women, primarily lesbians in the play, it’s super hard to convince people to produce it. I wanted to do readings just like the one you attended. That reading was really awesome. I feel like having people who aren’t actors read roles is really exciting, actually. And I like the intimate way the story was told. And so I was like, “Okay, I’m gonna drive around and go to bars and bookstores and community centers and do readings like that.” I also was very well aware that those spaces were closing pretty rapidly. If I go on the road I should do something to get some kind of a portrait, like a photo or an audio. That started to develop and I decided to make a documentary when I hit the road.

Billups: Around when you started shooting?

Alexis: Well, I started shooting in 2014. So the ramp up started before 2012, closings picked up around 2010, and then the years after that, there were just tons of announcements: another bar closing, another bookstore closing, another community center closing. It was before I hit the road when it was really moving. I do think it was the aftermath of the recession, because some of these places were around for a while.

I’m sure it’s like doing shows in the punk scene. These places don’t make enough money. They’re barely holding it together financially a lot of the time. So if they take a hit or even if their community takes a hit, right—which is the other piece of it—if the people who come to your shows or the people who help you pay the bills are stuck and they can’t come out or they’re moving because they lost their housing, $1,000 can make the difference for a place like that.

Billups: I noticed you mentioned the bookstore In Other Words in Portland. That’s one example because I know the margin on new book sales is razor thin.

Alexis: You know bookstores super well. I mean, they’re such important community spaces. Each bookstore has its own personality, but feminist bookstores have a long history of being super queer friendly. Many of them were started by queer people and they’re gone. They’re just by and large gone. They just can’t make the math work.

Billups: I was thinking about the difference between the Oklahoma bar in the documentary being able to sell alcohol. Alcohol has a high profit margin.

Alexis: It’s a great question and each of the spaces in the film has a very different approach. I would say none of them make a lot of money, but the key is that they either have ownership of the space they’re in, or if it’s like the W.O.W. Café Theater in New York City, they have an agreement where they got the space for a dollar and now they just have to maintain it to a certain standard and work to improve it.

Billups: Do they sell tickets to their shows?

Alexis: They do sell tickets and they definitely rely on the very, very small stream of revenue that brings in for them. And they do sometimes get grants from the local government, primarily the city government. I can’t go into detail ’cause I haven’t looked at the financial books for all of these organizations, but just impressions.

Billups: I was looking for broad strokes, like what you notice about different approaches to paying for spaces.

Alexis: The number one thing is none of them are paying rent and that’s huge. That means the way they earn money doesn’t have to rely as much on larger funding sources. The Esperanza Peace and Justice Center in San Antonio, Texas, have a number of properties. They definitely need larger funding sources to help maintain and renovate those properties. They have probably the largest and most diverse funding streams and it has to do with a lot of the cultural programming they do. They do a variety of work: political organizing work, cultural programming. Neighborhood preservation is probably the way to put it. I don’t know exactly all of their funding streams, but I know they probably have the largest budget of any of the spaces in the film.

Billups: I don’t mean to be crass, but if a bar struggles to survive, how can a collective make it?

Alexis: The bar and Oklahoma has a broad community. The broad community supports it. The bar in Oklahoma doesn’t just serve LGBTQ women. It’s also by day a biker bar. The fact that there are two different constituencies helps stabilize the bar in a lot of ways.

Billups: Another thing I enjoyed about the documentary, and what must be a real testament to the importance to a place like the archives, is the incredible amount of old footage and photographs you had to work with. There was such a broad scope of ages and events represented visually.

Alexis: Including archival material was super important to me because I know how hard it is to see archival material of LGBTQ women specifically. It’s hard to access. It’s hard to find. The number one reason I was able to find so much of it was because  I volunteer at the Lesbian Herstory Archive and have the help of some of the longtime volunteers there. That was a huge access point for me. And then with places like the Esperanza Peace and Justice Center, I just took a second trip back to San Antonio to look through their archives. They have their own amazing archive they’ve worked really hard to organize. They were very generous with letting me look through it and draw materials from it. It was a mix. First it was a Lesbian Herstory Archives, to have a broad picture across history. And then each of the spaces themselves has a really remarkable history.

Billups: Yeah. That material looked great in the film.

Alexis: It’s exciting to see, even as the filmmaker, because I know how hard it is to find this stuff. And it was so cool, because I wasn’t sure if there was moving footage I would be able to find. I wasn’t sure if there was footage I would be able to afford, to be honest. That was a huge question. Because accessing archival material can be shockingly expensive. I was concerned about that, but the people I worked with were incredibly generous. I had no budget for this film. And so without that generosity, that stuff wouldn’t be there.

Billups: And the more modern incidental shots, the parades and stuff. That was you guys?

Alexis: Everything from 2014 forward is stuff my cinematographer and I captured either on the road or in the city.

Billups: That stuff was great, too. I noticed you narrated, but left yourself out of the picture during the interviews. But your experiences come through.

Alexis: I was definitely initially pretty hesitant to include myself in the film. These spaces are so amazing and the stories they contained are so remarkable, I didn’t want to focus on myself in the end. I’m the narrator of the film and there are definitely shots of me at the archives and shots of me talking to people. I didn’t want to pretend I wasn’t there, right. That it wasn’t me making the film. So I decided to put myself in as sort of the thread tying everything together, because it’s my perspective. The political nature suggests it’s not only my own perspective shaping the film. I thought it was really important to have my own voice as narrator, make it clear these are my impressions, and it’s based on research I’ve done.

Billups: Ithink you struck a good balance. I like the way you did it. Anything I missed you’d like to talk about?

Alexis: The thing you opened with is the thing I’m most hopeful in terms of the film reaching other audiences. My hope is people will check it out, because there might be lessons that could help them, whether or not they’re LGBTQ or LGBTQ women. In the few screenings I’ve had so far, that’s some of the feedback I’m getting. There’s an activist who came to one of the new Fest screenings and was like: “Oh wow, there’s a lot of really good information in here for organizers and activists about important tools they could pick up.” My hope is that not only does this offer important stuff for LGBTQ communities, but it can also offer stuff to people outside of those communities.