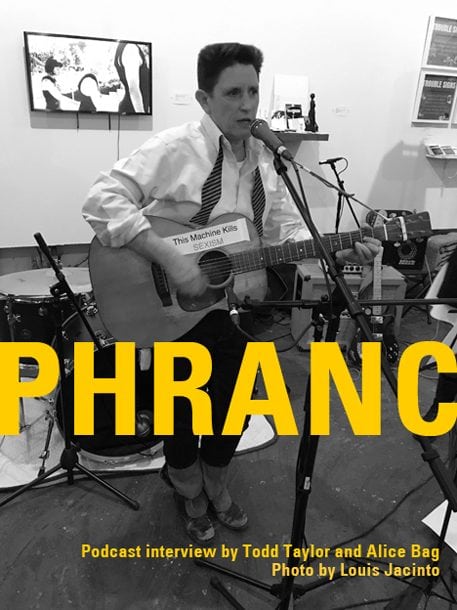 Interview Podcast with Phranc, by Todd Taylor and Alice Bag

Phranc, an out lesbian since the mid-‘70s, is a first wave L.A. punker. She’s been here since nearly the beginning and was in the epicenter of amazing music. She showed up and looked cool, which led to her playing in three bands: the marvelous, electro-caustic, and boundary-ignoring Nervous Gender; the wry, biting Catholic Discipline, featuring Slash editor Claude Bessy, Craig Lee of The Bags, and Robert Lopez of the Zeros; and the all-female, tough-as-hell, dagger-through-the-heart proto goth punk band Castration Squad. She’s also on film in Decline of Western Civilization.

Phranc, as a punk, went folk in the early ’80s. Her solo debut, Folksinger was released in 1985, and featured “Take off Your Swastika.” She toured the world both as The Smiths’ and Morrissey’s opening act and recorded five solo full lengths.

That’s her music bio, but that’s only part of her story. Phranc’s life involves a stint as a lesbian separatist, drug addiction, a painfully close death, and a horrific dog bite. It’s also a journey that includes surfing, lifeguarding, competitive badminton, selling the shit out of Tupperware, an ambition to being a cake decorator, and being a renowned visual artist working in cardboard while bagging groceries at Ralphs.

Far from bitter and cynical at sixty, she’s a living, breathing, humane reminder of what a broad span of creativity can look like. She is also really fucking nice. To be able to sit down with her and Alice Bag to get a more detailed picture of her life so far was an extreme pleasure.

Songs: “Take Off Your Swastika” from Folksinger and a live version of “It’s Cool to Get Old”

A great way to help support interviews such as these is to get a reasonably priced subscription of Razorcake delivered to your door. Click the link below